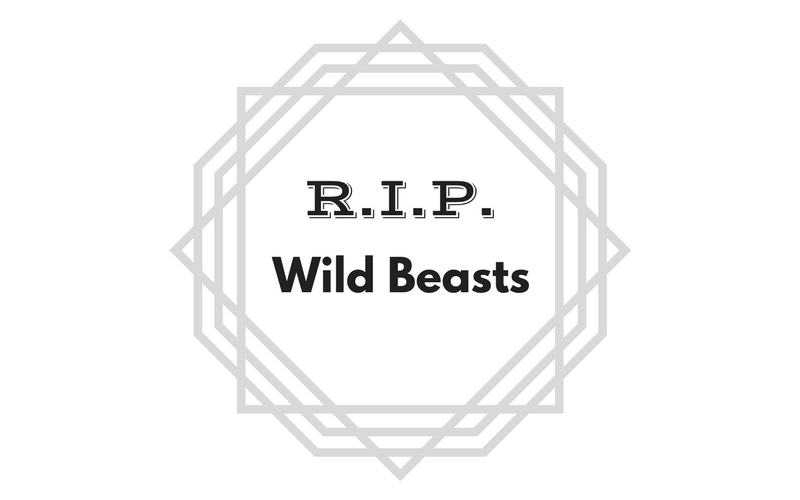 The announcement last summer that Wild Beasts are splitting up came to the surprise and dismay of indie fans everywhere. Over the course of five albums, from the baroque bombast of Limbo, Panto in 2008 to the audacious Boy King in 2016, the band has steadily put together an incredibly strong back catalogue of hypnotic, transgressive tracks, gradually evolving their sound, but always maintaining their distinctive qualities, making each song immediately recognizable as theirs.

Hayden Thorpe’s unmistakable falsetto coupled with Tom Fleming’s deeper delivery already made for an interesting and strangely sensual dual-frontmanship that’s difficult to compare to much else, but the band’s running lyrical themes of carnal pleasure, subversion of masculinity with accompanying expectations, and straight-up hedonism and decadence as pictured through a lens of near-Shakespearian language, made the band stand in a place between low-brow and high-brow art, appealing to theatre kids and lads alike.

Wild Beasts never sounded like a band running out of ideas, but, alas, they decided to quit at the peak of their powers. This week sees three sold-out farewell concerts, in Dublin, Manchester and then a final blow-out in London’s Hammersmith Apollo on February 17th. Now is the time to mournfully, yet gratefully, recap their excellent output. Below is a playlist chronologically tracking their 14 year-long career via 14 of their best songs, of course!

Even on their first full-length LP, Wild Beasts already sounded like a band with a clear sonic vision. A full embrace of lascivious synths was still an album and a half away, yet the overt sexual energy is already there, perhaps in its most primal form, with Thorpe nearly audibly destroying his vocal chords trying to deliver the perfect raspy falsetto. Best lyric: “Swig the bottle, bottle / Slap the face of Aristotle”

On their second Mercury Music Prize-nominated album Two Dancers, the band managed to strip back their sound ever so slightly without losing any of the energy inherent in their arrangements. Indie never sounded quite so primal and sardonic. Best lyric: “A crude art, a bovver boot ballet – equally elegant and ugly / I was as thrilled as I was appalled, courting him in fisticuffing waltz”

An enduring audience favourite, the near medieval chant evocative “oh-oh” refrain is are extremely congruent with the casual ‘Romeo & Juliet’ / Victorian ball references. ‘All The King’s Men’ is a song that only Wild Beasts could realistically pull off without sounding ridiculous or cartoonish, and we love them for it. Best lyric: “Hatch me! Hatch me! / And baby, turns out I’m evil”

4. ‘We Still Got The Taste Dancin’ On Our Tongues’

Wild Beasts can seemingly find infinitely many poetic ways to recount a raunchy, Hogarth-ian night out, but the special catchiness of the quality vocal line is what makes it special and another fan favourite. The hype is palpable from the first oscillating ad-lib. Best lyric: “Us kids are cold and cagey rattling around the town / Scaring the oldies into their dressing gowns”

After two albums of primal need-driven bacchanalia and casual meanderings, Smother was the band’s first overt encounter with heartbreak, and that was made immediately apparent from the opening track. With a steady synth groove and one of the band’s best-written piano lines, it’s an instantly memorable, hypnotic track. Best lyric: “I took the lion’s share / Not ‘cause I didn’t care / Just ‘cause I knew it was there”

Another sensual highlight from Smother, ‘Reach A Bit Further’ sees both Thorpe and Fleming sharing lead vocal duties. Placing a mellifluous, pinwheeling guitar riff over a mesmerizing beat that’s impossible to not move at least some part of your body to, it’s a subtle stand-out in their discography. Best lyric: “Tearjerker, shadow lurker / Wonder worker, reach a bit further”

A fitting closing track to an album like Smother, the song combines gorgeously hypnotic, pulsating guitar riffs with the vocalist’s peculiar vocal timbres to lull you into a slight trance, and leave you thinking that the end did, in fact, come too soon. Best lyric: “On the cusp, the both of us / Without any maybes but musts, that carry us / To the end too soon”

Propelling the band into even wider reaches of indie fame, Present Tense saw the band continue down the path of exploiting seemingly simplistic synthesizer sounds freakishly well, making them sound like an inherent and irremovable part of their sonic aesthetic. ‘Wanderlust’ is the prime example of this. With a mesmerizing, 6/8 time signature that doesn’t let up for its entire running time, it would have sounded completely anodyne in anyone else’s hands. Best lyric: “Don’t confuse me with someone who gives a fuck”

A worship hymn for the unadulterated and undisturbed feeling of desire, equating mutual attraction to a literal place of worship that millions of people make their spiritual pilgrimage trip to every year. An allegory for the ages. Best lyric: “All the lovers that loved before us and breathed in this ether / Where the body goes the mind will follow soon after”

Wild Beasts never overhauled their sound from album to album, preferring small gradual evolutions. The fluid and curvaceous R&B inflections of ‘A Simple Beautiful Truth’, placed right in the middle of their fourth LP, represent probably their most united performance as a group. Best lyric: “A simple beautiful love is worth countless triumphs / When it’s real, when it’s real”

While the band’s newest album Boy King might have split some fans’ opinions on the “FutureSex/LoveSounds grooves meet early Nine Inch Nails” direction the band was taking, the album was undeniably excellently produced, and contained some of the catchiest tunes the band ever penned. The meta-factor of the band known for their stereotypical masculinity subversion donning leather jackets and singing “big cat gotta be on top” is highly appreciable as well. Best lyric: “Take the collar off, baby / Won’t be a house cat / Are you okay with that?”

Distortion abound, ‘Tough Guy’ is as outwardly tough as it is revealing of the innate insecurity that comes with being the “alpha male”. The intricacies of this juxtaposition are up to the band’s highest lyrical standards, making it one of the best tracks off of Boy King. Best lyric: “Now I’m all fucked up and I can’t stand up / So I better suck it up like a tough guy would”

A sardonic takedown of today’s prevalent hook-up culture, from the perspective of the predatory male. It’s about as definitive of Wild Beasts as a lyrical theme can get, but what makes the song is the superb groove, vocal delivery, and the stand-out pitched vocal sample. Best lyric: “I want you to love me, I want you to trust me / In the patterns of your heart and never be apart / No names, no doubt, get in and get out”

The titular track from the band’s final EP hardly showcases a band running out of ideas. The superb interplay between the restrained bass and the drums are about as catchy and memorable as any of the band’s previous output, and it’s a groove begging to be turned up as loud as the speakers go. The highest of Thorpe’s falsetto notes to go out on. Best lyric: “What’s done is done, what can be said / Why speak, why dry the tongue, what’s done is done”