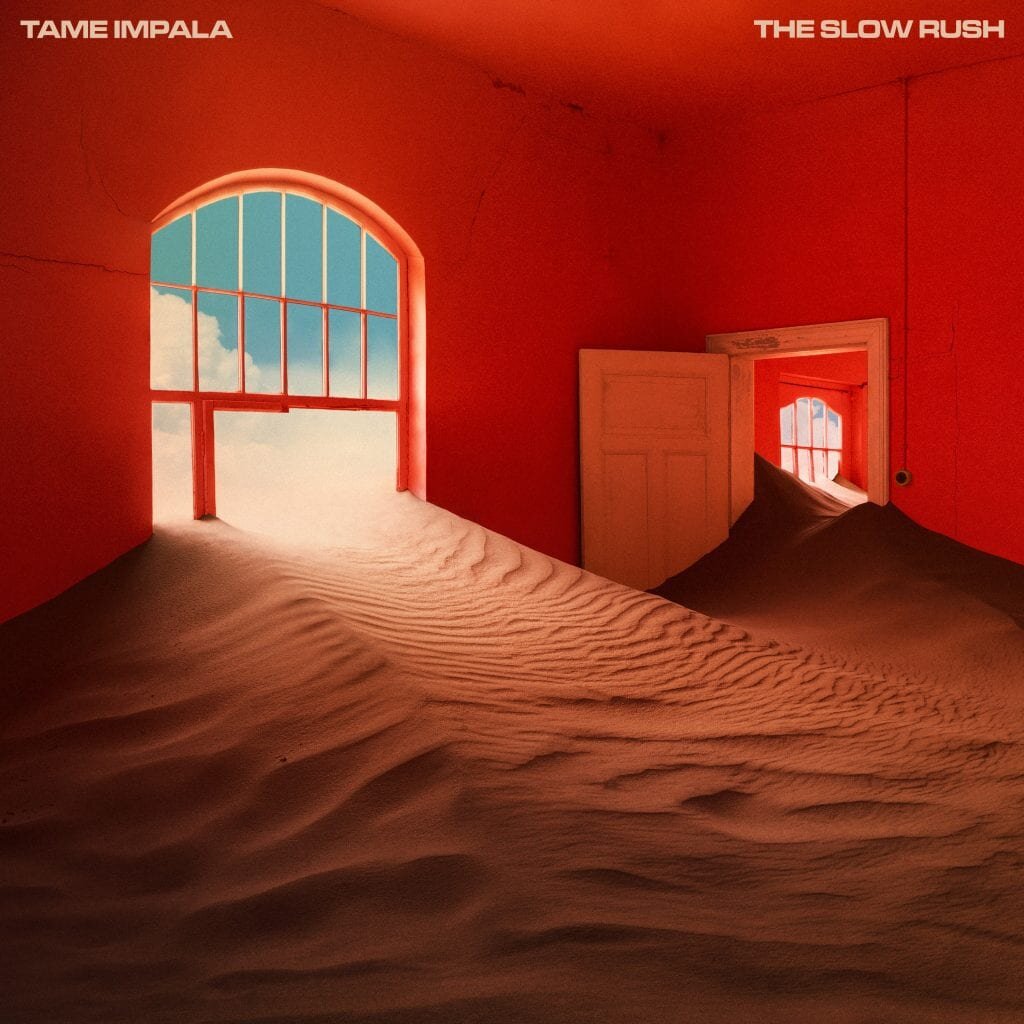 A thematic and true sequel to his previous Tame Impala masterpieces, Kevin Parker ruminates on the nature of time on ‘The Slow Rush’.

Kevin Parker, and by extension his one-man band Tame Impala, has come to be associated with a particular and familiar kind of perfectionism. One that seems pervasive in certain corners of the music industry, particularly as far as slightly introverted “genius” producers are concerned. In 2015, that obsessiveness resulted in Currents, a genre-bending magnum opus and an ode personal change. On the album, emotions were let loose over swelling synthesizers, drums patterns that hit as simplistically as they did hard, and entire song structures glitching out. In the five tortuously long years since it came out (never to come out of student radio rotation in that time), Parker has worked with or contributed to acts such as Rihanna, Lady Gaga and Kanye West, amongst others. However, Tame Impala remains chiefly his vision, seemingly completely uninfluenced by the sometimes haphazard and impromptu creative processes of pop music’s giants. The Slow Rush is still the sound of a perfectionist working through his inner angst, one bassline at a time.

On his Instagram post celebrating the release of the album, Parker wrote “Well there it is, a year of my life in a cardboard sleeve. A year of blood, sweat and tears and joy and anguish.” This seems apt considering the journey of the album from the initial announcement to its actual release. Parker’s endless obsessiveness resulted in the entire album being re-mastered after a listening party in November 2019 because he kept noticing things he wanted to change, the single ‘Borderline’ being shortened and re-mixed for its album version, while the first single ‘Patience’ ended up getting cut from the release altogether. What results in the oxymoronic The Slow Rush is a thoroughly engaging experience of a guy, both in-narrative and in the meta-text of the record, fighting time itself.

Lyrically, Parker doesn’t shy away from emotional lines, or ones that call out himself with a wink and a nod. ‘It Might Be Time’ features him reflecting on the core theme of the record and quite unforgivingly asking himself to deal with it: “It ain’t as fun as it used to be, […] You ain’t as young as you used to be”. Elsewhere, on ‘Posthumous Forgiveness’, he deals with his relationship with his father, who tragically passed away in a fight with cancer in 2009. The tradition of completely indecipherable (without the Tibetan Book of the Dead, at least) lyrics of traditional psych-rock music is tossed aside, as ever, by Parker, in favour of genuine emotional self-expression. Always favourable, some of the songs hit that much harder because of it, the drums on ‘Posthumous Forgiveness’ hammering the point home with fierce intensity. Even if the entire record feels lacking in those magical moments where the music almost parts for the clarity of Parker’s gut-punch lines such as “They say people never change but that’s bullshit, they do.”

The core of the psychedelic sound that’s come to be associated with Tame Impala hasn’t changed. The vocals are permanently drowning in echo. Heavy repetition is involved. Yet unlike the melancholy that seemed to permeate the synthesized sounds of Currents, The Slow Rush sounds distinctly more up-beat, and the instrumentation foregrounds disco influences. Back in 2012, when the band’s true mainstream breakout Lonerism was just beginning to take the music industry by storm, Parker said this of their creative process: “The way we do music, it’s organic, but it’s meant to be quite repetitive and hypnotic, almost in a kind of electronic nature. Using our playing as though it was a living sample”. That doesn’t change here, and the meditative nature of his writing is best displayed on ‘Breathe Deeper’, a six-minute meditation on relaxing and enjoying the moment. The drums involve a break every other bar, straight out of the old-school hip-hop play book, and you almost forget that all of this is genuinely played and performed by one person – including the clunky piano straight out of Saturday Night Fever.

As always, Parker’s knack for melody is unmistakable. ‘Borderline’ introduces a bassline that’s as groovy as the best of Currents, before breaking out into an obnoxiously catchy call-response like vocal melody. Meanwhile, the aforementioned ‘It Might Be Time’ features a synthesizer straight out of Dr Dre-produced early ‘90s gangsta rap hits, which is one of those annoying things that once you hear it you can’t stop being in awe of its utilisation and recontextualisation.

The Slow Rush feels like Parker’s coming-of-age album in many ways. Already an established and recently married man, he faces less the tumultuous emotions of break ups and finding his path, and more the coming to terms with his choices, the passage of time, and the path he’s already on. Closer ‘One More Hour’ reckons with all of these as synthesizers and guitars (!!) come dramatically crashing down in bursts. Rather than building, the song kind of dips in and out of its own trance, and its reflective of the progression of the album as a whole. Not as filled to the brim with distinctive moments and hits as its predecessor, like time, The Slow Rush is more of an experience you just kind of let wash over you and pass you by, and for all its worth, the famous Parker production touch lets you lose yourself in the journey if you give it the chance.

If the possible genius of Kevin Parker could be distilled down to a simplistic formula, it would be the combination of his intensely melody driven song-writing, psychedelic music’s ability to make you feel lost in a wall of sound combined with electronic music’s ability to make you feel exactly the same on its own terms, all held together by the ridiculous amount of perfectionistic tinkering with sound to make it all seamlessly work together. The Slow Rush doesn’t necessarily surpass the sky-high expectations that fans might hold onto for Tame Impala after a five-year hiatus following one of the greatest pop records in recent memory, but it certainly holds its own and is reflective of both his standard of excellence and the ongoing passage of his life. A thematic and true sequel, if there could ever be one. (8/10) (Ellie Wolf)

Listen to The Slow Rush by Tame Impala here via Spotify, and tell us what you think below!