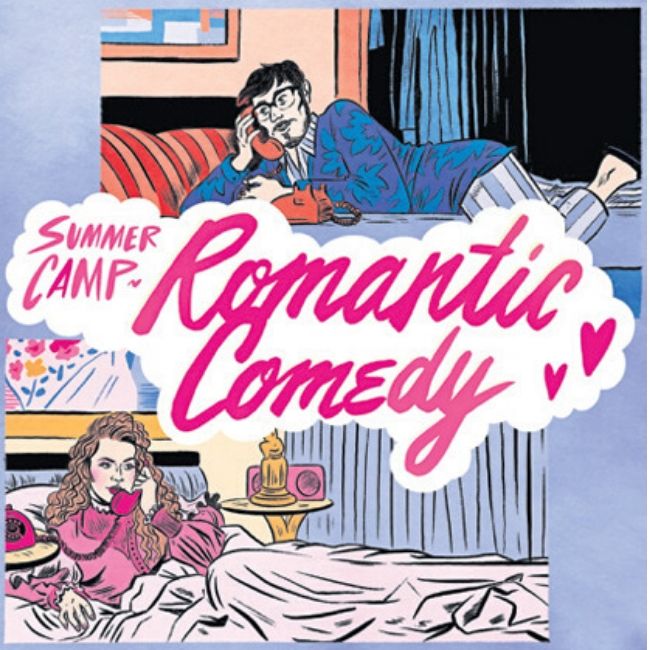 Four albums, three EPs and a decade later, Jeremy Warmsley and Elizabeth Sankey are back again with their fifth full length Summer Camp album, Romantic Comedy, which acts as the score for Sankey’s directorial debut of the same name, a project focussing on the norms and clichés of rom-coms through the years. Known for their frequent discussions of the topic of love, the synthwave beats that back these conversations and love for the rom-coms of the ‘70s and ‘80s, Summer Camp trade their synth-heavy beats for greater instrumentalisation and a more orchestral feel on this record. Romantic Comedy is littered with excerpts from rom-com of the ‘60s and the ‘70s, and definitely feels like some lost soundtrack for a teenage/rom-com movie of the ‘80s.

Romantic Comedy starts off with ‘Dreams Of Love’, a relaxing song to ease the listener in which contains nothing more but a slow strumming guitar, a steady synth tune, a prominent bass line and an extract of an old movie where a couple talk about going back to the magical moment of their first kiss. Then comes ‘The Ugly Truth’, which talks about fallacies of the concepts of “love-at-first-sight” and “the one”. But true love is about finding someone who makes you feel content and “all right” because it is about finding the balance between the good and bad of a relationship, because relationships, like most things, are not perfect. In terms of tune, it leans slightly towards a more pop rock-like tone and an echo for an added reinforcement of the album’s message.

With ‘Love Of My Life’, Summer Camp switch things up with a more disco-like feel, talking about difficulty in coping with the feelings of love for someone who doesn’t love you any more, and whose lyrics are eerily in the same spirit of The Police’s ‘Every Breath You Take’. The Warmsley-led ‘When Danny Met John’ talks about love between two men, and how their story takes place from loving to leaving each other, and then finding each other again and Danny confessing that he never quit loving John.

‘Barefoot In The Park’ comes up next with the ‘70s yacht-rock aesthetic discusses about wanting to have “movie love”, something that purely fictional but the visions of grandeur are too tempting to be abandoned. ‘Women In Love’ is about falling for a woman who is packed full of idiosyncrasies and complexity and the sound returns to pop-rock for this track. ‘You Complete Me’ is a country ballad about a couple’s different upbringing, the day they met and where the relationship reached after a while. ‘It Happened One Night’ serenades the listener with a great piano piece that runs throughout the song and talks about a girl, possibly autobiographically based on Sankey’s own experiences, who laments for a period of time long gone where she fell in love with a rom-com movie where the main characters promise to be together, but she views it as unrealistic when she grows up to be an adult. And finally, with ‘Run’, Summer Camp discuss what is next, is there something to chase after love falls apart or fades away.

Apart from ‘Love Of My Life’, there are several other tracks on this record that are purely instrumental with little to no vocals or extracts from romcom movies of the bygone century, an appropriate touch considering it doubles up as the score for Sankey’s movie.

It might be Summer Camp’s best work yet, with each song dealing with a different aspect of love and eventually why everything is not rainbow and sparkles when it comes to love. Romantic Comedy is anextremelywell-produced album in terms of lyrics, beats and melody, and beautifully pays tribute to and subverts various tropes from romantic comedies throughout pop culture history. It could divide Summer Camp’s fans because of the change from the conventional indie-pop, but the overall change in tune and speed on top of the huge variety on display is a positive direction for the band’s growth. (9/10) (Aryan Agarwal)

Listen to Romantic Comedy by Summer Camp here via Spotify, and tell us what you think below!