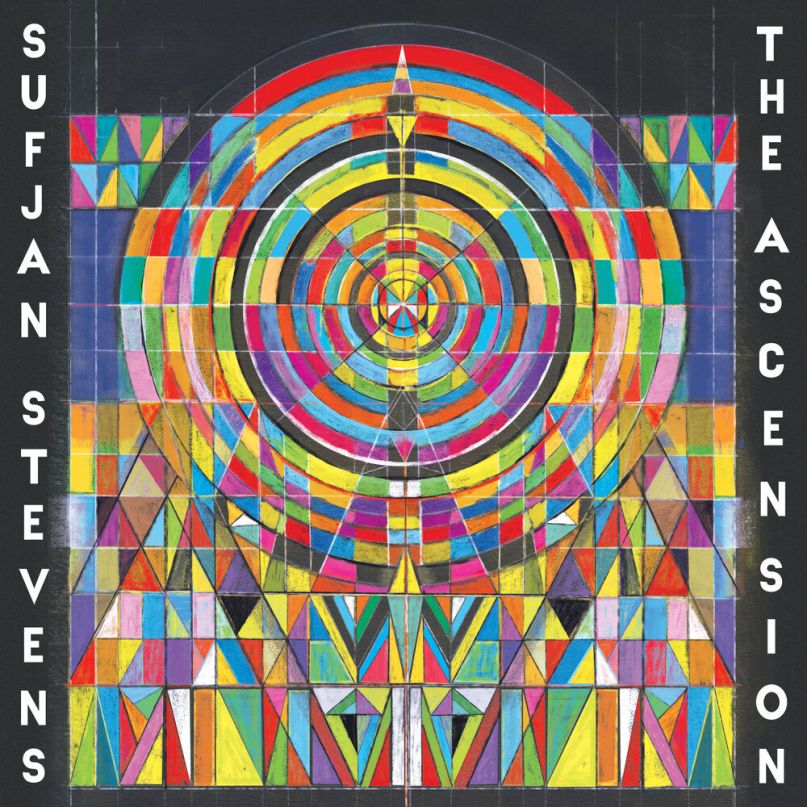 A daring and expertly crafted statement that’s a product of its political climate, ‘The Ascension’ is another masterpiece from Sufjan Stevens.

These demanding times can make anyone question everything or bring even the most positive person to anger and frustration and everyone’s favourite Bible studies guidance counsellor Sufjan Stevens is not an exception. Excepting the curio of Aporia, a brief selection of electronic pieces composed with his stepfather Lowell Brams earlier this year, The Ascension is his first full-length solo record following the incredible critical acclaim of 2015’s Carrie & Lowell – an atmospheric record that shifted through childhood trauma and parental relationships through soft-spoken lyrics and minimalist acoustic instrumentals. This time, and quite uncharacteristically, Sufjan seems to channel as much bitterness and anger as he does sadness into the sonic landscape of The Ascension. The record is obviously a product of and an answer to its political climate, Stevens himself describing the record as “political, bossy and bitchy”, and newly-disenfranchised Sufjan does not disappoint.

An immediate takeaway from the first few minutes of this hour-plus-long statement is its primarily digital instrumentation. It would be shocking to hear this from Stevens, whose most widely known works more often than not rely only on a banjo and maybe an acoustic guitar if you’re lucky. However, anyone familiar with his discography will immediately recognise traces of the digital maximalism of cult-favourite The Age Of Adz – Stevens’ 2010 foray into more electronic composition. And if there’s one short-hand way to describe The Ascension, it’s the angry crying lovechild of the two aforementioned records.

As is usually the case with a Sufjan Stevens work, the album is packed with questions of life and death and tracks that could both be interpreted as songs for a lover and songs for Jesus. However, on The Ascension Sufjan sounds exhausted, angry, and bitter (at least by his own standard). The same vocal melodies that used to re-affirm a belief in God and the American mythos (as on his break-out LPs Michigan and Illinois, parts of what was allegedly meant to be an obviously insane project involving an album for American state that, of course, never happened) are now the same ones he uses to dismantle beliefs in most things Western/American culture has come to stand for in the 21st century.

Immediately from the opening track ‘Make Me An Offer I Cannot Refuse’ Stevens pleads with his faith for deliverance. Yet all the lines are delivered with a sense of bitter rhetoric. The song has multiple crescendos and hits as one of the most immediate and intricate songs Stevens has ever written. Mapping out its dynamic valleys and peaks on a chart would do a semi-decent job of reflect the many rises and falls of the global economy in the last 40 years or so. Yet you couldn’t be more wrong in thinking that it sounds too out-there or experimental, based on that description. The Ascension is a pop album at its core – it just so happens to be one that’s chock full to the brim with various sonic flourishes that manage to elevate it to almost avant-garde territory in places, but, almost miraculously, don’t lose the listenability in the process.

Parts of the vocal melody on ‘Tell Me You Love Me’ sound straight out of a Lana Del Rey song, and the track in general is one emotive string arrangement away from being right out of Born To Die. To be honest, some of the purposefully kitsch lines and mantras that are interspersed in various chants throughout the run-time of the record would possibly sound too on the nose even for that album. “Tell me you love me”, “Come on baby give me some sugar”, “Goodbye to all of that” (a literal and thematic reference to a famous Joan Didion essay of the same name, because of course), etc.

Stevens referred to the reliance on the repetition of typically clichéd statements in an interview with The Fader, speaking of it as a way to reach at least a vague truth in moments of tragedy, when there’s no proper language for comprehending what’s happening. This idea is pushed to the literal maximum on the song ‘Die Happy’, in which the only line is “I wanna die happy”, repeated over and over again, until you yourself start to contemplate all the different esoteric things the sentence could mean, and different ways the notion could be applied, back and forth and over and over again. There is definitely something enchanting about the way Stevens applies the wiki-how-to directional simplicity of such statements.

It helps that the songs in general are instrumentally engaging enough to not get dull, even when incessant lyrical repetition occurs. The album was mostly composed by Stevens with a drum machine and a few synthesizers after leaving his long-time New York studio and moving, and while all his more traditional acoustic instruments were packed away in a storage unit. But the record does it’s best to explore the sounds offered by the actually limited array of digital instruments used. The arrangements effortlessly transform from being led by soft, ambient sounds to much more aggressive industrial-like instrumentation, that almost evokes certain Nine Inch Nails tracks. Parts of it sound like subtle accompaniment to existentialist cinema, while others sound almost like they could be played at an off-kilter club night.

It’s a tribute to Stevens’ songwriting skills that The Ascension still sounds uniform and not like a random, incomplete idea slog-fest – despite its lengthy run-time and even if a few of the tracks could have perhaps been trimmed a little at the edges. While different songs seem to have different emotional specifics in mind, there’s always a connecting factor of both a sense of complete loss and a need for some form of salvation. On The Ascension, Sufjan isn’t necessarily offering anyone any answers. If anything, he’s clearly as lost as everyone else. But it feels anything but lost – it’s a daring and expertly crafted statement of its time. (9/10) (Ellie Wolf)

Listen to The Ascension by Sufjan Stevens here via Spotify, and tell us what you think below!