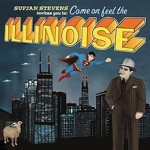 Ten years ago, a few people must really have believed that Sufjan Stevens was serious about his ambition to record a concept album about all 50 American states. His splendid 2003 album Michigan had set the ball rolling, and while he interrupted the sequence with 2004’s Seven Swans, it was followed with 2005’s Illinois, the album many consider to be his magnum opus. In fact, Stevens was so prolific in the mid-noughties that an entire 75 minute album of Illinois outtakes, named The Avalanche, was released the following year, and it was at this point that everybody realised that Stevens can’t have been intending to finish another 48 albums worth of material – it would have taken him until his late seventies, even at that high rate of output. Indeed, he hasn’t released any more state-themed albums since, but at least he abandoned the project on a high: Illinois isn’t just the greatest record of his career, it’s one of the very best of the decade.

The album is studded with references, both explicit and subtle, to the history, geography, attractions and traditions of the northern state, alongside or mixed in with themes that were already familiar to Sufjan’s fans – his childhood memories, personal anxieties and his Christian faith. All held together with his gentle, unforced falsetto, what comes across is a kind of twee but genuinely affecting sense of communalism, of Stevens drawing together disparate characters (both real and fictional), ideas and references together under one roof. At 22 songs and 76 minutes, it’s a sprawling album that doesn’t make sense unless you listen to it in one sitting, and as indicated by some of the very, very long track titles (in the case of ‘The Black Hawk War…’, the song doesn’t last long enough for the full title to scroll across an iPod screen!) it’s more than a tad indulgent at times. But a vast concentration of musical riches lies within for the dedicated listener.

That an album of such incredible variety – choirs, brass sections, synthesisers, Wurlitzer organs, strings and sleigh bells all rub – could have followed so quickly after Seven Swans, whose acoustic minimalism is in such stark contrast to Illinois, was testament to Stevens’ work rate and application as well as the huge array of ideas sloshing around his head. After a couple of two-minute instrumental salvos, we arrive at the two-part ‘Come On! Feel The Illinoise!’, with its jaunty jazz structure that moves from 5/4 to 4/4 time in the middle, that references the 1893 World’s Columbian Exposition and the 1910s poet Carl Sandburg set to some pretty saucy trumpets that at one point sound a bit like The Cure’s ‘Close To Me’. The themes and reference points are thrown at a disorientatingly fast pace, but if you let yourself get pulled along it works like a charm.

Sufjan’s lyrical prowess is a marvel to behold, his vulnerability coming through on the more stripped-down songs. The banjo plucks and muted horns of ‘Casimir Pulaski Day’ (an annual holiday in the state) tell of stolen moments of privacy with a girlfriend suffering from bone cancer, and a subsequent doubting of faith on Stevens’ part. ‘The Predatory Wasp Of The Palisades Is Out To Get Us!’ sees him reminisce about a summer camp, set to shimmering accordion sounds. Geographically, there are several flights of lyrical fancy that use actual places as launch pads. ‘The Seer’s Tower’ is a thinly veiled reference to Chicago’s Sears Tower (now called Willis Tower), whose mournful piano and lyrics seem to critique and bemoan capitalism’s atomising effect on communities (Sears & Roebuck were the largest retail group in the world when they commissioned its construction in 1969), with the lyrics using metaphor and exaggerated imagery to make the point (“seven miles above the earth / he comes dividing men from brothers”). ‘The Man From Metropolis Steals Our Hearts’ references Superman, a resident of Chicago in the comic books, and casts him as a Christ-like figure of redemption. ‘Decatur, Or, Round Of Applause For Your Stepmother!’ was an exercise in arbitrary rhyming schemes, compared to the dense prose he uses in most of the rest of Illinois.

‘John Wayne Gacy, Jr’, a re-telling of the mundane childhood of the mass-murderer who killed 27 homosexuals and buried them under his house in Chicago in the 1970s, is the most spine-tingling non-autobiographical moment. By addressing aspects of Gacy’s personal life (such as “when the swingset hit his head”, referencing an accident that caused a blood clot in his brain as a small boy) and avoiding ham-fisted judgementalism, Stevens is actually able to look the horror straight in the face and let the listener draw the conclusions, a sense reinforced by the unsettling calm of the music and the shifting narrative viewpoints in the lyrics. The emotional gut-punch of ‘Chicago’, addressing the sense of relocation and starting anew that’s an integral part of the American national myth, is also a stone-cold triumph that many fans regard as his finest individual song. With its full-band approach and dual meaning of escapism and relationships with God, it’s a moment of sheer majesty.

Illinois, then, contains more invention in an hour and a quarter than a lot of bands express in an entire career. Virtually every instrument you hear was played by Stevens, as well as solely arranged, engineered and produced by him. He treats his instruments with same kind of reverential attention as Elliott Smith or Nick Drake, making sure that every single aspect is communicated properly on record. Perhaps unsurprisingly, he hasn’t attempted to make anything on this scale since – 2010’s The Age Of Adz, a moody electronically-influenced record, has been the only proper studio album he’s done since, if you don’t count ten EPs worth of Christmas songs made in 2006 and 2012. That was, until, 2015, when Stevens returned to his finest form with Carrie & Lowell, a heartbreakingly autobiographical effort intimately referencing his parents and his childhood, which we reviewed here and named as Best New Music. For an artist always thinking forwards rather than backwards, we probably shouldn’t expect anything like Illinois again any time soon.