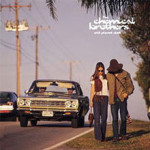 About to release their eighth studio album Born In The Echoes next month, The Chemical Brothers’ stellar career has begun its third decade: funny to think it all began because the Beastie Boys’ production team wanted their name back. Known at the very beginning of their career as The Dust Brothers, Tom Rowlands and Ed Simons were DJs who began to make their own music using basic samplers and equipment in 1992, picking up a good reputation in the underground scene and gradually being commissioned to do remix work for major artists over the next few years (Leftfield, Primal Scream and The Prodigy were just a few). In 1993, they were picked up by The Sabres Of Paradise’s Andrew Weatherall for his Junior Boy’s Own imprint on the strength of a one-off white label single ‘Song To The Siren’. After a couple of years of touring, an album was commissioned, and early in 1995, the duo were forced to change their name to The Chemical Brothers at the behest of the Beasties’ producers to avoid confusion. The title of the first record, released in June 1995, is a cheeky wink of acknowledgment to their old moniker.

From the start of their career, the Chemical Brothers wanted their music to signify something more cross-cultural. In an interview with Muzik shortly before Exit Planet Dust’s release, Simons explained: “nobody from the dance world has come up with an album to reflect these times. Why is that? Why is it left to a group like Oasis to express the way that young people want to go out and get battered every weekend? That’s what The Chemical Brothers are about.” The album, and its 1997 successor Dig Your Own Hole, made them just one of a handful of British dance acts with a spiritual connection to the overt hedonism of prime-time Britpop. As well as Orbital, Underworld, The Prodigy and Massive Attack, they found acceptance in the rock press.

The first six tracks of Exit Planet Dust are a continuous mix of entertaining big beat shenanigans, as the Chems were known more as DJs rather than performers at the time. Their stall is set out straightaway, with opener ‘Leave Home’ commencing with a burbling sample of Kraftwerk’s ‘Ohm Sweet Home’ cleverly interrupted by the vocal snippet from Blake Baxter’s ‘Brothers Gonna Work It Out’ and a juddering house chassis that became a UK Top 20 hit single. The first half proceeds on very similar lines, with a brief stop off to revisit the then-three year old track ‘Song To The Siren’ with its dirty, funky workout that has little more than blaring sirens and a wailing sample of This Mortal Coil as accompaniment. This straight-down-to-business, DIY feel is what makes the very first Chemical Brothers tracks so appealing.

That mix is certainly compelling, but it’s on the second half of Exit Planet Dust that we get to see another, deeper side to Rowlands and Simons, as they offer us five more unmixed tracks that constitute the comedown after the party, a couple of which feature guest vocal appearances from their musical allies. ‘Chico’s Groove’ is the kind of chillout instrumental that would become a feature of every Chems album, and ‘One Too Many Mornings’ seems to evoke that ‘6am walking home’ feel after being up all night. ‘Life Is Sweet’ features The Charlatans’ Tim Burgess’s warm vocals over a brief revisit to the breakbeat of the first half of the album, only much less frenetic than before, focussing on the groove rather than the beat. The simplistic ‘Playground For A Wedgeless Firm’ bleeds into the spectacular beauty of the closing track ‘Alive Alone’. Beth Orton, a singer songwriter yet to be picked up on by the mainstream rock press, totally steals the limelight with a soulful lyric about that existential crisis that hits every weekend clubber on a Sunday afternoon, only the chiming guitar sample is the sound of your hangover melting away.

While it’s an album of two very distinct halves, a structure adopted to make optimum use of the limited material they had at their disposal at that point and one they’ve not repeated since, the hallmarks of their sound are all over Exit Planet Dust, in nearly full form. Using big beat music as a template, Rowlands and Simons drew in influences from psychedelia, funk, soul, golden age hip hop, acid house and rock on this and all their future releases. As time went on, the Chemical Brothers would have that eternal cross-genre aspect to their music, becoming the dance act that it was okay for guitar fans to like, an appeal that also derived from the way that they frequently used star names from the world of indie and Britpop to provide guest vocals for their songs. At the start of their career, the pair were resident DJs at London’s Heavenly Social Club, a fashionable hangout for artists and record label bigwigs in the early ‘90s, and there they made all their celebrity connections – Noel Gallagher, James Dean Bradfield, Bobby Gillespie, Richard Ashcroft etc. – that enabled them to operate in this way. Revisited now, it can seem somewhat basic at times, but that sense of wide-eyed exploration and learning-on-the-job enthusiasm for original music making is very much present.

Arguably James Blake's most out-and-out dancefloor orientated work yet, 'Before' is a reminder of…

Unlike his work with The National, it's very much up to the listener with…