REVIEW: Wavves & Cloud Nothings – ‘No Life For Me’ (Ghost Ramp) 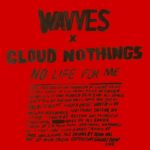 Front cover of ‘No Life For Me’

This short but sweet treat by Wavves’ Nathan Williams and Cloud Nothings songwriter Dylan Baldi appeared by surprise on iTunes and Bandcamp right at the end of June, with very little fanfare accompanying it subsequently. Which is a bit of shame, as No Life For Me is a pretty accurate summation of the appeal of both bands collided into a succinct presentation: admittedly, Baldi’s and William’s similarities vastly outnumber their differences. While it rarely strays out of familiar territory, it’s more than a worthy addition to the back catalogues of both, the sound of two artists grabbing the low-hanging fruit and having great fun cutting loose and relaxing.

At just 21 minutes and nine songs in length – two of which are sub-two minute instrumentals – No Life For Me probably falls into the ‘mini-album’ category, making it feel slightly disposable and inconsequential. You get the feeling more people would be talking about it if it lasted another quarter of an hour or so: certainly, both Williams and Baldi sound like they wouldn’t be short of more great ideas if they worked together a bit longer. However, the album’s brevity is entirely in keeping with the general ethos of both bands: no-nonsense, lo-fi, disciplined garage punk that sounds like an angry dog straining on a short leash.

The surf-punk, head long kamikaze of ‘Hard To Find’ and the title track may not be groundbreaking, but it’s done masterfully. The nihilist slacker ethos of Baldi’s writing rubs up nicely against the mixture of drone rock and fast-paced post-hardcore, particularly on ‘How It’s Gonna Go’ (brutally short lyrics like “I’m a fucking mess”). The moody, subdued onomatopoeia of ‘Nervous’ sees the duo engaging in something a little different at the halfway point, blossoming more slowly into a surf-pop outro. ‘Such A Drag’ is the only song Williams wrote without Baldi, which oddly doesn’t work that well as the noisy hiss of hi-hat drowns out a lot of the other instruments. But this one mis-step is made up for by the rumbling bass and cheesewire guitars of ‘Come Down’. While it may be short on quantity, there’s no question as to the quality here. (7/10)

Listen to No Life For Me here!