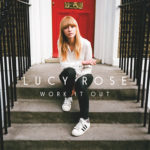 Front cover of ‘Work It Out’

Having worked with Bombay Bicycle Club on a couple of their albums at the start of the decade, English singer-songwriter Lucy Rose stepped out of the shadows with her enjoyable and compelling debut album Like I Used To, which enjoyed a decent life in the public consciousness, being mined for several singles and used in TV dramas such as ‘Girls’, ‘Skins’ and ‘The Vampire Diaries’. Her pretty, hushed voice had inflections of Joni Mitchell’s introspective heartbreak, and did enough to ensure that Rose wouldn’t merely be carrying around the tag of ‘Bombay Bicycle Club’s backing singer’. For its follow-up Work It Out, she seems to be gunning for the big leagues, bringing in Mumfords and Tom Odell producer Rich Cooper to give it a much more overtly chart-friendly feel.

The fragile outlook of ‘For You’ opens the album, Rose playing her acoustic guitar with the merest brush of the strings, before it suddenly bursts gracefully outwards into commercial indie-pop territory. It’s an encouraging start, but as it wears on you realise that the ambitions of Work It Out don’t stretch beyond making vaguely nice-sounding singer-songwriter material designed for early afternoon slots at the main stage of Latitude, content to sound like an awful lot of other things. Even introspective moments where we get to know a bit more about Rose, like ‘My Life’, follow routine and formulaic structures. Singles ‘Our Eyes’ and ‘Like An Arrow’ are admittedly very pleasant moments, and the heavy beats of ‘She’ll Move’ is an unexpected moment of contrast near the end, but overall it suffers from a lack of memorable material.

It’s all prim and properly produced, but Work It Out doesn’t spark into life at any point, and very rarely gets out of second gear. There’s a smattering of genuine quality lurking amongst the record, but you’ll have to concentrate pretty hard to pick it out from all the non-descript ‘tab A goes in slot B’ filler. Worse, in aspiring to commercial success in an already crowded marketplace for this sort of thing, Lucy Rose seems to have abandoned the slightly ramshackle folk edge that made her debut album such an appealing little gem at times. Which is a shame, as Rose’s personality remains a hugely likeable one, but Work It Out pursues an identity overhaul that takes very few risks and really doesn’t need to happen. (5/10)

Listen to Work It Out here!