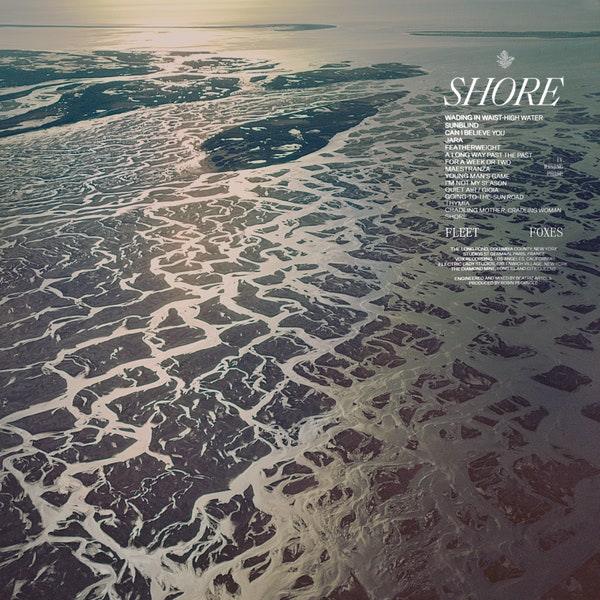 ‘Shore’ is Robin Pecknold’s most sun-drenched and stripped back Fleet Foxes album yet – something that both works in its favour and against it.

If ever someone were likely to thrive in the forced internalisation of a pandemic, it would be Fleet Foxes frontman Robin Pecknold. Over the last 15 years, he and an ever-revolving cast have poignantly penned some of the most introspective and refreshingly confronting folk music that has left fans as jubilant as it has forlorn.

Constant progression has been the theme of Fleet Foxes’ releases. 2017’s comeback Crack-Up represented the most interesting sound the band had produced yet; a record which took the time to experiment with its hypnotic passages of repetitious rapture. It was a record that personified the progression that Pecknold looks to attain on each release, so it was somewhat surprising to hear on fourth record Shore the most sun-drenched and stripped-back collection of songs since the project’s 2008 self-titled debut.

Looking at the album cover of a Fleet Foxes LP reveals plenty of what to expect; Helplessness Blues’ collection of abstract art summed up the experimentation and fuller sound that was to come, so to compare Shore to Crack-Up is to say that we are now entering the gentle calm after the storm has passed.

This is not to say that Pecknold has played it safe on Shore, though here the reinventions are more subtle. For on the project’s fourth record we are treated to some of the most rock-indebted songs that Pecknold has recorded. Both ‘Can I Believe You’ and ‘Quiet Air / Gioia’ feature dense drums, with the latter almost losing the voice of Pecknold in the mix amidst the jagged guitar licks.

Throughout Shore, the main risk of the record is its simplicity. Where in the past an idea has been allowed to be fleshed out and experimented with fully, here the ideas are a lot more concise. ‘Maestranza’ flourishes for its tightness; initial shuffling drums are blended by layer upon layer of gorgeous guitars, an idea leaves as soon as it becomes familiar, where previously a sound would ruminate, here we are left wanting more. However, the directness of the album does not always work. During the more abstract ‘Going-To-The-Sun Road’, the sheer volume of intermingling instrumental ideas are begging to be explored in more detail; be it the multitude of horn progressions or the backing harpsichord, it’s a moment which could (and should) have been allowed to develop.

Lyrically, Shore is a triumph from start to finish. Focusing on a myriad of topics, from the lack of social opportunities on the streets of New York (‘Jara’) to depression and addiction (‘I’m Not My Season’), Pecknold manages to tastefully capture a full range of emotions.

However, it is the record’s focus on death and eulogy which epitomises the LP. Album highlight ‘Sunblind’ hits that magical middle ground between the miserable and the majestic. Instrumentally the track does not try to do too much, instead preferring to rely on a phenomenal vocal performance. Lyrically, the track pays tribute to many of the records influencers; there are references to Tim Buckley and Jimi Hendrix, however, it is the tribute to David Berman which stands out. The euphoria which surrounds the track almost evokes the ironic state of joyous instrumentation that surrounded much of Purple Mountains.

Shore also packs some of the softest punches that Pecknold has ever delivered. ‘Featherweight’ and strips back all instrumentation to instead allow for a devastatingly regal punch. Elsewhere, ‘Thymia’ works wonderfully for its rising guitars and Beach Boys vocal harmonies.

At first glance, Shore may not seem like the triumphant piece of sonic progression that it is. By reverting to a more accessible sound, Robin Pecknold has taken one of his biggest risks yet. Though on occasion, this has its missteps, without a doubt Shore is a sun-soaked beauty of a record; it may not win over those who aren’t fans already, but for those prepared to give it time, Shore represents another excellent instalment in the Fleet Foxes discography. (7/10) (John Tindale)

Listen to Shore by Fleet Foxes here via Spotify, and tell us what you think below!