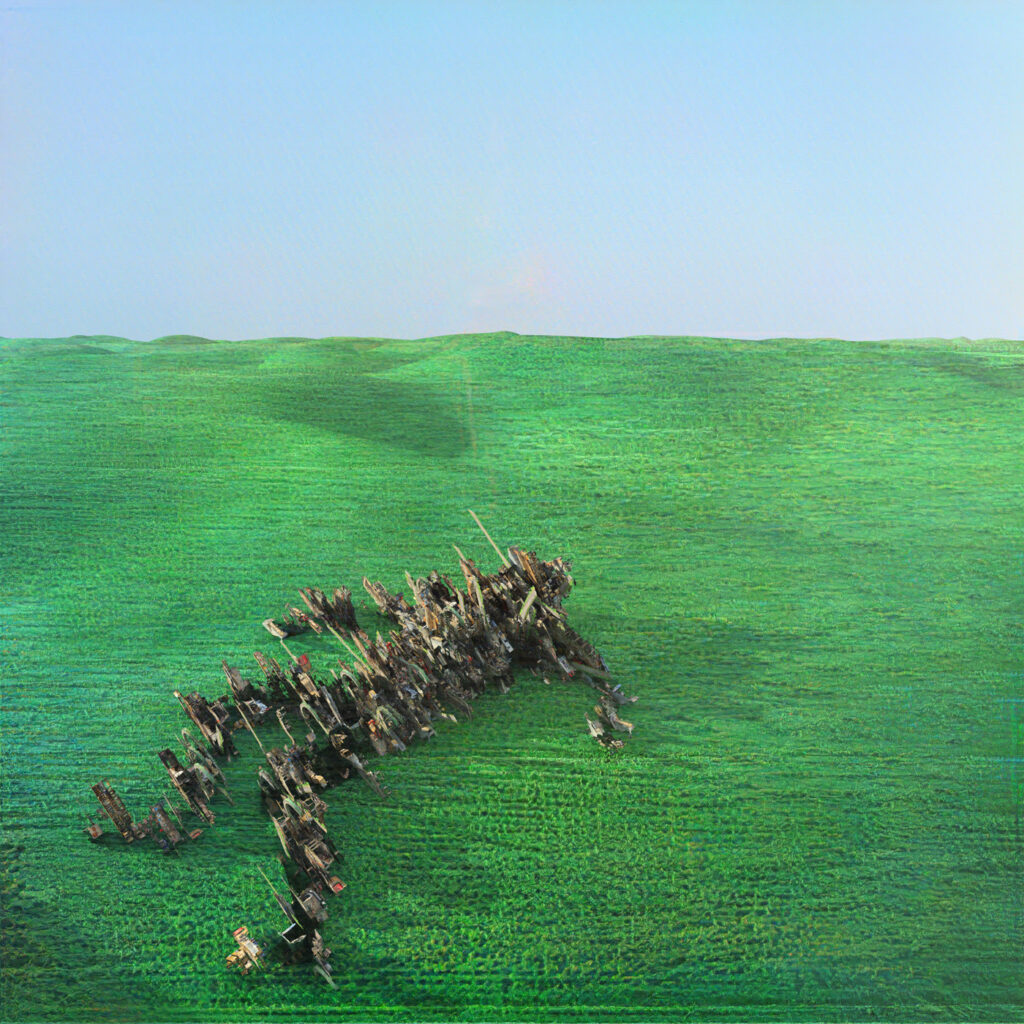 ‘Bright Green Field’ consists of engaging formulations of post-punk, funk, jazz and krautrock executed with manic energy – truly, Squid have delivered one of the finest British debuts in recent times.

The title and artwork for Squid’s debut album acts as a red herring, obscuring the truth of the musical content itself. While a name like Bright Green Field superficially evokes images of pastoral and airy landscapes in the countryside, much of the music contains dense, intricate and unrelenting instrumentation accompanied by lyricism that constructs dark visions of an imagined urban cyber sphere. However, this thematic juxtaposition between product and content is a fitting representation of the remarkable stylistic diversity Squid display on their first full-length.

Certainly, elements of post-punk, funk, jazz, electronica and krautrock are all present throughout the record – as we’ve come to expect from their singles and 2019’s engaging Town Centre EP – yet for a debut release this really does feel like a band striving towards a post-genre sound. How seamlessly the band blend all their different styles and influences is one of the grandest achievements on Bright Green Field. The result is an album which sees Squid push their ambition further than ever before but rarely fail to master the diverse range of musical styles they utilise.

Early in the track list comes the colossal ‘Narrator’ which stands out as not only one of the best songs on the album but of the year thus far. Released as the first single from Bright Green Field, it helped garner a lot of deserved attention for Squid in the run-up to their debut. A true behemoth of a track, all eight minutes and twenty-nine seconds bursts with a restless energy that twists and re-shapes itself in many forms, after a typically Squid art-rock opening. Despite lead singer and drummer Ollie Judge insisting the album “is more concerned with place” than people, ‘Narrator’ is a staggering character study of a man’s gradual descent into insanity. The character, voiced by Judge, maniacally tries to reassert his existence by repeatedly bellowing “I play my part”, often speaking over his female counterpart played by Martha Skye Murphy. Eventually the gendered power imbalance in the vocals is overthrown in the songs’ thrilling conclusion where Murphy’s cries become increasingly shrill and blood curdling, and a melee of guitars soundtrack her breakdown.

The manic energy present on a majority of the tracks can be put down to the intense recording process of the album last summer. The unusual studio techniques of Speedy Wunderground head Dan Carey (who’s produced Black Midi, Goat Girl and Fontaines D.C. among many others) combined with the coincidental timing of a national heatwave led to ferociously charged recording sessions. However, whatever edge these circumstances offered Squid as a band, it definitely benefits the output, as much of Bright Green Field sounds anxious, energetic and tightly wound, seemingly always on the precipice of an explosion of synths, noise-rock or another of Judge’s eccentric vocal licks.

Other moments on the LP that highlight Squid’s immense talent and almost scary potential include second single ‘Paddling’ and the grand closer ‘Pamphlets’. The former really leans into the dystopian world-building that characterises the lyricism on Bright Green Field. Louis Borlase doles out orders in a monotone and omniscient fashion, “Just do what you’re told” like some sort of Big Brother dictator, over a slow-build electronic bed and hypnotic guitar riffs. The final third of the track descends into Judge’s frantic screams of “Don’t push me in!”, as he rejects the cult-like conformity extolled earlier in the lyrics. This song structure which progressively spirals into sonic mayhem is employed a number of times across the album, but never becomes any less exhilarating to listen to. ‘Pamphlets’ follows suit in terms of the way it unravels instrumentally, however lyrically Judge chooses to tackle the relentless spread of right-wing propaganda through the means of another deranged character, who becomes overwhelmed by the sheer volume of information coming through his letterbox.

The industrial ‘Peel St.’ and bleak ‘Global Groove’ form an effective pair in the second half of the track list, emphasising the incessant yet futile trudge of life in the city and both leave a whirring imprint on the listener. Squid manage their influences well for the most part, despite instances such as ‘2010’, where In Rainbows-era Radiohead are evoked a little too obviously, they usually separate themselves with their own unique blend of musical styles and performance. The accomplished nature of Bright Green Field remains its most impressive feat – Squid sound like a band whose assuredness and maturity are beyond their years, and with such a clear sense of identity which helps forge their own lane in the landscape of modern music. (Joss Lambert) (8/10)

Listen to Bright Green Field by Squid here via Spotify, and tell us what you think below!