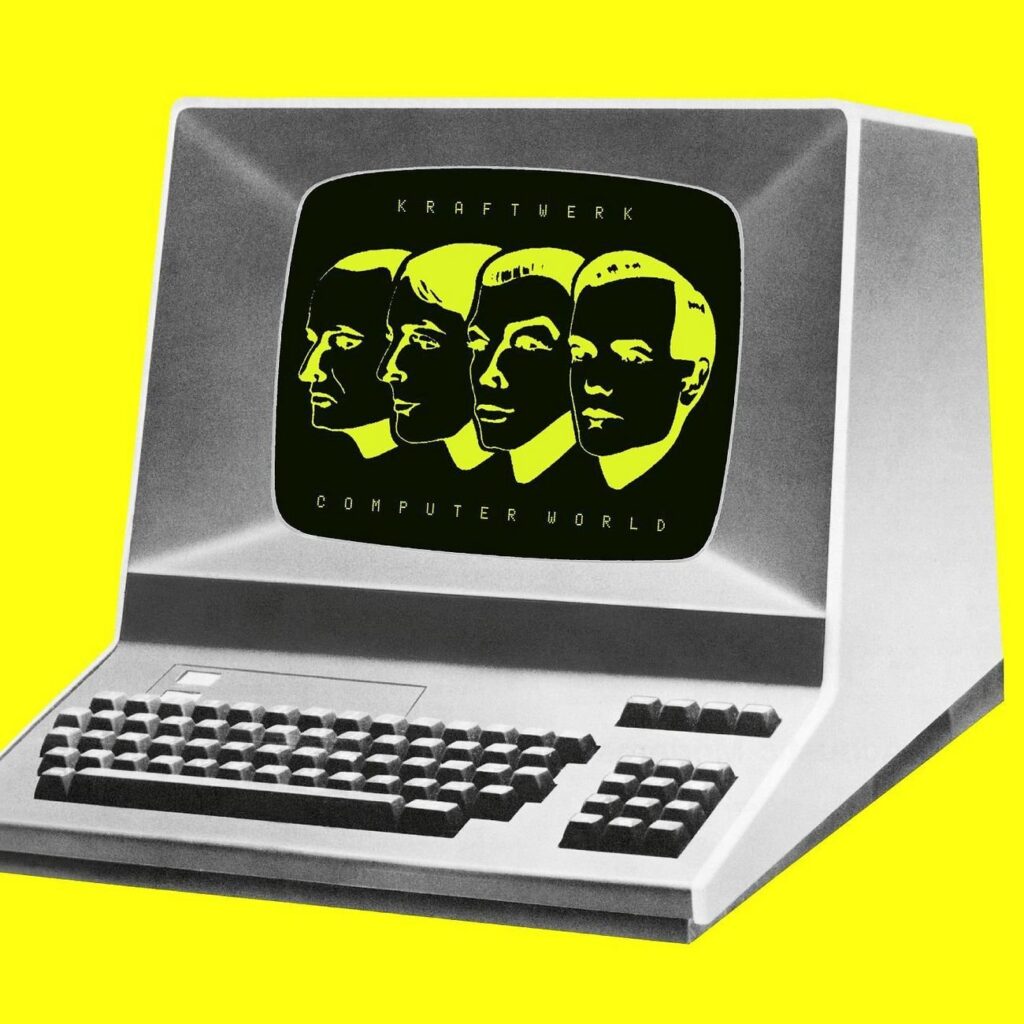 While they had spent the previous half-decade ahead of the pack with their futurist electronic symphonies – the unstoppable run of albums from Autobahn to The Man-Machine in the mid-to-late Seventies – by 1981 the rest of the world had begun to catch up with Kraftwerk and the innovations they had brought to the table. In the three years they were away, electro and hip-hop had begun to make themselves felt on the edges of the mainstream; post-punk had not only exploded in a big way, but had already morphed into new wave and the New Romantic movement. When they released the ‘Pocket Calculator’ single from their new album Computer World, the initial reaction was one of slight puzzlement – had these Teutonic pioneers of revolutionary, cutting-edge electronic music now dealing in mere novelty?

Of course not. Kraftwerk, again, were just too far ahead of the curve for anybody to realise that there was even a curve to be ahead of. Only now, it was in the respect of their music’s specific themes, rather than the actual character of the music itself. To understand this, it must be remembered how the world of computing and electronics was portrayed in the media back in the early Eighties, where labour-savingtechnology would free up humankind’s capacity for leisure, not how the world of privacy invasion, data harvesting and workplace surveillance actually panned out in the subsequent forty years. What Tim Berners-Lee brought about with the invention of the world wide web was supposed to advance knowledge, not stifle it in a cloud of fake news. From the ominous, two-tone descending riff of ‘Home Computer’, Kraftwerk sound a warning that this utopian vision would come with consequences. Not dire ones about robotised routines, but merely that the changes will be more deep-rooted and revolutionary than humans thought in 1981.

Then again, to portray Computer World entirely as some kind of dystopian, OK Computer-esque prophecy is to overlook the sheer amount of fun and beauty it contained. The overall sound is brighter, more clinical and more sanitised than their Seventies output, thanks mainly to technological advances that cleaned up the reverb and echo of Kraftwerk’s analogue synths and scrubbed all of the audio spillage of the beats. Its three-year gestation was partly down to touring, followed by their decision to completely dismantle, re-wire and rebuild their Düsseldorf studio Kling Klang.

Kraftwerk’s typical attention to detail paid dividends from the very beginning of Computer World with its opening title track. With its gorgeous four-note motif and insistent, punchy beat that sounded like typewriter keys entering data, ‘Computer World’ established the record’s enduring themes of technological dependence and omnipresence. In 1981, still in a Cold War context, these issues would have been of libertarian importance, particularly for West Germans. Ralf Hütter’s transistorized vocals intoning “Money / Numbers / People / Time / Travel / Communications / Entertainment” seem utopian at first, but might also presage the affluent 21st century condition, summing up the non-stop nature of our existence, never able to switch off or unplug.

‘Computer World’ is reprised at the album’s mid-point, folded into the iconic track ‘Numbers’ that constitutes one of Kraftwerk’s most dazzling and influential beat sequences. Programmed by the underrated Karl Bartos (but never credited to him), the brutal, physical yet minimalist beats and taut electro-pop production are simply impossible not to move at least some part of your body along to. They were sampled, along with the melodic line of ‘Trans-Europe Express’, by Afrika Bambaataa & Soul Sonic Force for their hip-hop smash ‘Planet Rock’ a few years later, one of the genre’s most formative landmarks. So it was that this innocuous, seemingly disposable track, which could have been mistaken as a novelty for teaching children how to count – the lyrics are no more than somebody counting up to eight in a handful of different languages – ended up being one of hip-hop’s most foundational texts.

Computer World’s second side begins with one of Kraftwerk’s most heartbreakingly beautiful pieces. Buoyed along by a haunting melody, ‘Computer Love’ perfectly communicates the anxiety of loneliness despite being surrounded by technology that enables instant, remote communication, also obliquely predicting the world of online matchmaking (“another lonely night / I don’t know what to do / I need a rendezvous”). Many know its melody in the context of Coldplay’s 2005 hit single ‘Talk’, which repurposed ‘Computer Love’s hook for its chorus line, played along to a distinctly Kraftwerk-ian mechanized, motorik rhythm. Paired with 1978’s ‘The Model’ as an AA-sided single, ‘Computer Love’ hit the top of the UK charts early in 1982, making Kraftwerk the first German artists ever to do so.

Next to these pieces, a track like ‘Pocket Calculator’ – chosen as the album’s lead single – might seem rather inconsequential, its droll, faintly camp humour scanning as slightly lightweight. However, that sense of detachment did cleverly skewer the macho posturing of traditional rock. Hütter’s tongue-in-cheek intonation of “by pressing down a special key it plays a little melody” was a funny riposte to the dull traditionalists in the music industry complaining that electronic equipment like synths, drum machines and samplers were somehow ‘not authentic’ music – think of all those crushingly dull Queen albums that came with “no synthesizers” labels on them. Album closer ‘It’s More Fun To Compute’ seemed to reprise most of the themes that came before it, but was nonetheless a perfect piece of crystalline, synthetic pop on which end proceedings.

It was a statement of pure musical perfectionism, almost to the point where it was a fault – some fans, looking back, felt that Computer World passed an imperceptible boundary of being too ordered and fastidious – nothing, not even a molecule, was out of place, thereby losing the human spirit and heartbeat that had undeniably driven Trans-Europe Express and The Man-Machine. For many others, though, Computer World was the ultimate perfection of form and content, the most singular and all-encompassing expression of the range of their artistry from music and technology to image and presentation. In this manner, pop culture theorists have suggested that Kraftwerk presaged the post-modern condition that Western society has been suspended in for four decades, a state in which history, events and popular culture seem to have stopped flowing in linear fashion and become cyclical, leaving us with a sense of living in a permanent, endless present unmoored from the past and future.

Regardless of where precisely you stand on Computer World and its relative standing compared to their Seventies output, what’s not in doubt is that it represented the end of Kraftwerk’s golden age. In the five years of silence that followed, the generation of artists they had so undoubtedly influenced caught up with Kraftwerk. When it finally arrived in 1986, Electric Café (known commonly as Techno Pop with subsequent reissue campaigns) was their first album that failed to put those imitators in their place. No longer where they the fearless, futuristic innovators, instead treading water alongside many other similar sounding artists. Bartos and bandmate Wolfgang Flür had departed by the turn of the Nineties, and Kraftwerk essentially transformed into their own tribute act, the respectable 2003 collection Tour De France Soundtracks aside. But for all the subsequent decades of silence, touring and tinkering with their back catalogue, it must always be remembered how musically significant Kraftwerk’s finest output was. Computer World marked the final part of that era.

Listen to Computer World by Kraftwerk here via Spotify, and tell us what you think below!