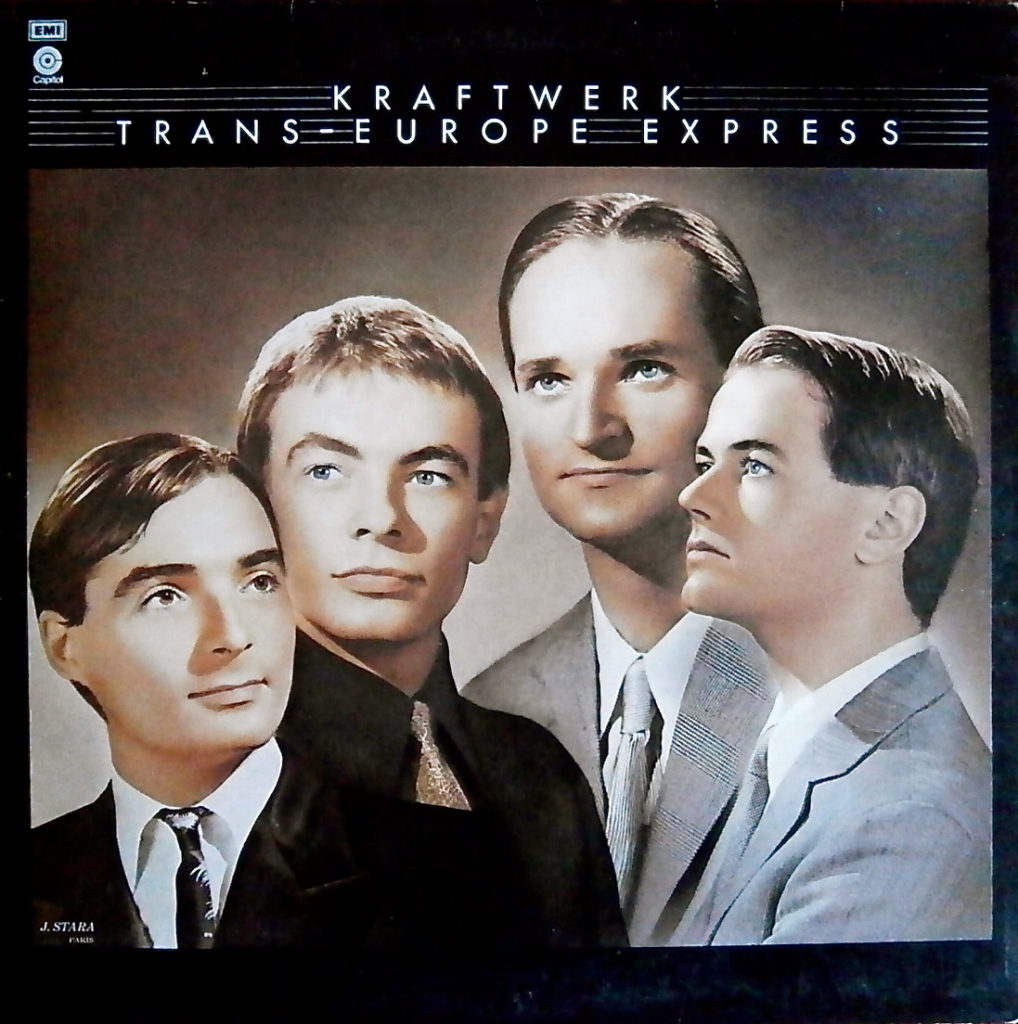 While 1977 will forever be remembered as the year of punk in Britain and America, there was another arguably even more profound revolution happening on the European mainland. Trans-Europe Express, the sixth album in total by Düsseldorf electronic pioneers Kraftwerk, is absolutely integral in explaining the subsequent evolution of 40 years of popular music – very much more so than the three-chord strictures of punk’s initial blast.

From post-punk and the British New Romantic movement, to hip-hop, electro and techno, Trans-Europe Express is simply one of the most influential albums in history. Given that Kraftwerk themselves did so much to de-individualise the notion of the pop star – by wearing uniforms, performing in such a way that the individual band members were subsumed by the system of the group itself (check out those oddly anonymous portraits, faintly Romantic in their stance, on the album’s front cover) – it’s ironic that they should have such a vast impact.

While 1974’s breakthrough Autobahn is possibly the most famous single cultural moment they’ve ever been responsible for, becoming a surprise hit around the world with many writing off its earth-shattering invention as a novelty, Trans-Europe Express is generally held up as the archetypal Kraftwerk album. Autobahn’s second half still bore the trappings of Ralf Hütter and Florian Schneider’s original iteration of Kraftwerk from the late ‘60s that saw them play woodwind rather than synthesisers, while 1975’s musique-concréte Radio-Activity saw them assemble the ‘classic’ line-up by adding Wolfgang Flür and Karl Bartos and transition towards the kind of fully mechanised music with which the group is commonly associated.

New technology available to the band made the sound of Trans-Europe Express possible as they worked at their own Kling Klang studio. Firstly, the Orchestron keyboard allowed Kraftwerk to flesh out and expand their previously rather skeletal sound. You can hear this on the heavenly yet synthetic choir of celestial voices that elevate the epic ‘Europe Endless’ into the stratosphere. Without it, the track would have much less of its crucial warmth. Secondly, the Synthorama sequencer opened up the possibility of piling up elements on top of each other in the mix in a way that hadn’t been previously workable. Vocals, drumbeats and synthesisers were combined in a way that felt a lot more crystalline and futuristic, and the repetitive, perpetual motion machines of the rhythms were far easier to construct.

However, there’s something even more important than technology and lyrics in explaining the completely revolutionary appeal of Trans-Europe Express to listeners – the motivation behind the music itself, and why Kraftwerk were making it.

The sense of fearless optimism and futurism, combined with the oddly quaint sense of ‘retro’ that infused some of the record’s presentation – the decadent, Weimar 1920s feel of the promotional video for ‘Trans-Europe Express’ and of the album’s front over, signalling a time when Europe still had war behind it but was looking to the future – comes from the sense of existential shame with which Germany’s young people had been saddled by the 1970s. Born in the late ‘40s and early ‘50s, their identity as a result of their parent’s generation and the nation’s defeat and heavy punishment after the Second World War had been something to which they had always been accustomed, without really questioning it.

The young German artistic community – Hütter and Schneider’s generation – wanted to reject this shame via their art, and it was a frustration that arguably found other, more violent outlets in the actions of the Baader-Meinhof Gang, for example. The vast majority of the creative community, dating back to the krautrock movement of Can, Faust and Kraftwerk’s original three albums, sought to forge a new and distinctive identity for homegrown music that offered an alternative to blues (i.e. American)-based pop music coming from the States and from Britain. Indeed, baffled reviewers initially coined the term ‘industrial folk music’ to describe Kraftwerk’s Radio-Activity, identifying that this was something originating from outside of the pop tradition entirely, a music inherent to the factories of mainland Europe. This is a concept explored much further (and in better detail!) in David Buckley’s excellent biography of the band ‘Kraftwerk: Publikation’.

From the opening synthesised riff of ‘Europe Endless’ to the final seconds of its microscopic coda ‘Endless Endless’ that bookends the album, Trans-Europe Express is a groundbreaking tour de force that proved to be a wellspring of inspiration for thousands of new artists. Moreover, it speaks to the beauty of Europe, and Germany in particular, with the twin centrepieces ‘Europe Endless’ and the title track providing a thematic core that was much more powerful than anything they had conjured before.

‘Europe Endless’ fades in with a beautiful, glittering and hypnotic synth refrain that seems to evoke the Romantic Period and some of the great central European composers of the 19th Century. Describing the natural landscape and urban architecture of grand old cities and ancient mountains as they travel across a huge continent so recently riven by war yet retaining so much of its beauty, Europe is conceived of as an ideal, a utopia, argues Buckley. Hütter intones “elegance and decadence” before the vocoderised “Europe endless” intones – keeping his lyrics simple and observational, it manages to be just as vivid and descriptive as the infinitely sprawling synths that express the themes of the song.

The title track ‘Trans-Europe Express’ is a similar thematic concept to ‘Autobahn’ but this time with trains instead of cars. A love letter to a continent expressed through the language of electronics and with the metaphor of a railway journey, its mechanical, swaying rhythm mimics the sound of train wheels on rails with a mesmerising, trance-like intensity. However, this time the melody and mood are slightly darker and more foreboding than ‘Europe Endless’, as if evoking the same physical landscapes but this time at night.

The lyrics, however, are a celebration of trans-continental travel, speed, efficiency and the cities travelled through. “Rendezvous on Champs-Elysees / Leave Paris in the morning, T.E.E. /…/ In Vienna we sit in a late-night café / Straight connection, T.E.E.” go Hütter’s clipped and descriptive observations. It evokes a different age of travel altogether, before package holidays and budget air and train travel were an option to most and trans-continental journeying was a pursuit that required money and was more often than not luxurious. A bygone age 40 years and later and dying out even then, it was a kind of love letter from Hütter and Schneider to their childhood memories.

‘Trans-Europe Express’ segues impeccably into a coda titled ‘Metal On Metal’ (split into two parts on later re-issues with ‘Abzug’ listed as the second half), whose brutal, clattering angularity had a clear influence on industrial and noise-based groups going forwards. Together, the two tracks sprawl over nearly 13 minutes of hypnotic and trance-like rhythm. ‘Franz Schubert’ is an ambient coda of the base melody of ‘Europe Endless’, which fades out into the sub-one-minute coda ‘Endless Endless’, on which note the album ends.

However, sandwiched in between these two epics are two rather curious tracks whose themes are entirely different to the travelogue motifs of Trans-Europe Express. The sombre and minimalist ‘Hall Of Mirrors’ is like a complete inversion of the chirpy, expansive ‘Europe Endless’ that precedes it, and concerns the distorting effects of fame on the individual. Its uneasy, walking pace and queasy, digitised synthesiser piece that burbles away underneath makes it an utterly eerie and disquieting experience, and it’s something of a hidden classic in Kraftwerk’s catalogue.

‘Showroom Dummies’, a single that was both a wry nod and a middle finger to those who criticised them for being ‘emotionless’, and a theme that would be taken further on ‘The Robots’ from The Man-Machine the following year, the idea of the mannequin or robot being the avatars for Kraftwerk themselves. Years later, they would famously perform with actual robots on stage instead of themselves. Like ‘Hall Of Mirrors’, it’s also an oblique commentary on the nature of celebrity and fame itself as it would evolve in the coming decade, a deadpan take on a rock culture that they themselves had started to sample in the nightclubs of Düsseldorf.

Importantly in their development, it dated back to 1975 and is really the first Kraftwerk song that you could actually dance to. The idea of inanimate, humanoid mannequins coming to life (“we’re being watched / and we feel our pulse”) and roaming the city struck a chord with sci-fi obsessed Brits when the radio edit was re-released as a single five years later in 1982. Importantly, underneath the sleek robotics of the rhythm, it showed that there were human hearts underneath Kraftwerk’s studied and serious exteriors.

Allmusic offers the insight that Trans-Europe Express is not a thematically coherent concept album but feels like two different concept records soldered together – one about fame and celebrity, the other about the European continent. However, it doesn’t feel uneven as a result.

Blending mechanised rhythms, cold yet majestic minimalism and maddeningly catchy melodies, Trans-Europe Express represented ‘the shock of the new’ that appears every now and again in popular culture, speaking in a voice and in a language that had never been heard before. People had previously written Kraftwerk off as a novelty, but by 1977 their achievements had become increasingly difficult to ignore.

While it performed only modestly in most charts (except France, where it was a massive hit), its importance lies not in raw commerce and units shifted, but in the fires it lit in the imaginations of others. David Bowie raved about it throughout his 1977 interviews during his own ‘Berlin’ era. The synth-pop acts in Britain in the late ‘70s, like OMD and The Human League, would take their cues from the simple, sometimes even child-like melodies on display here. Afrika Bambaataa took the melody of ‘Trans-Europe Express’ and fused it to the rhythm of another Kraftwerk track, 1981’s ‘Numbers’, to make his own pioneering hip-hop hit ‘Planet Rock’ in 1982. As techno grew throughout the ‘80s, one could hear Kraftwerk in its DNA.

Listing it as the sixth best album of the 1970s, Pitchfork claimed that Trans-Europe Express was one of the hallowed canon of music history, a “record that simply cannot be written about”. Despite the words and descriptions above, this is to a large extent true: Trans-Europe Express is so engrained in the make-up of popular music that one could not possibly overstate its importance. Forty years later, it still sounds so futuristic, and many have still to catch up with them.

Listen to Trans-Europe Express here via Spotify, and tell us what you think below!