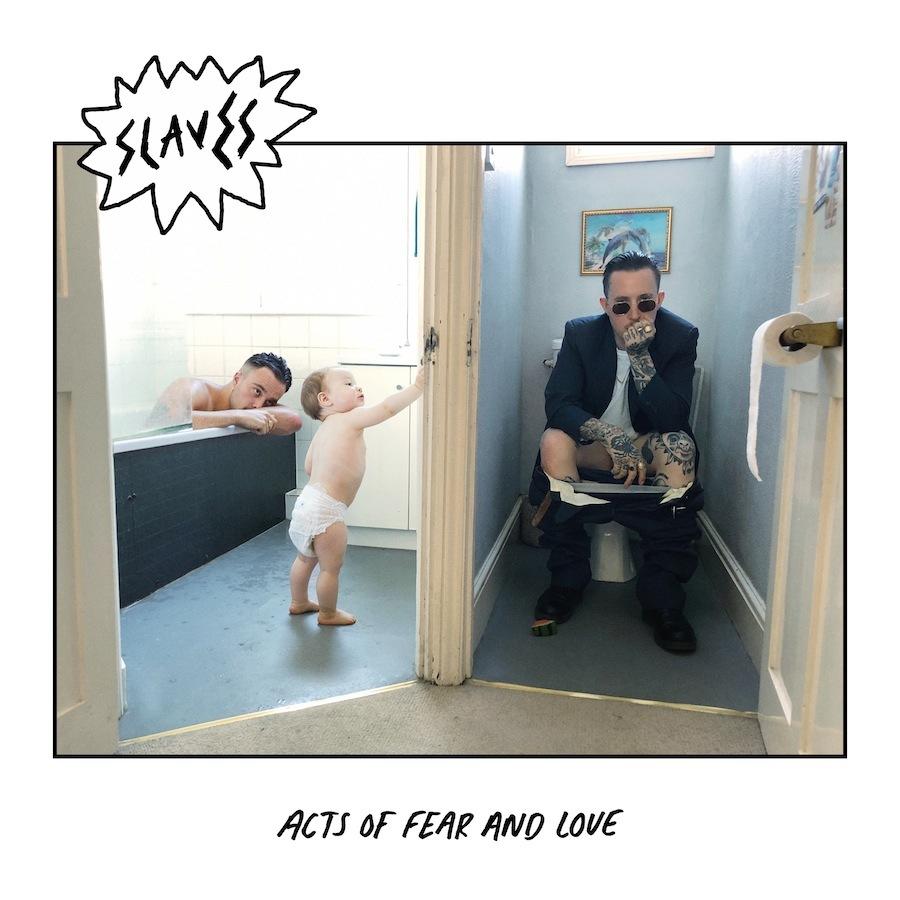 On their third album ‘Acts Of Fear And Love’, Slaves update their template and produce their most emotionally honest and thorough work to date.

Despite their first singles dropping a mere four years ago, it feels like Kent punk duo Slaves have been in the game for ever. They’ve earned a reputation for brutal live performances and built up a fan base as big as their guitar riffs, becoming one of the most successful British guitar bands of the decade. However, latest album Acts Of Fear And Love feels like a conscious effort to escape the pigeonhole they have built for themselves with their last two albums, 2015’s Are You Satisfied? and 2016’s Take Control.

Whilst vocalist/drummer Isaac Holman’s rasping yelps are more focussed and aggressive than before, his vocal dynamic on Acts Of Fear And Love is also broadened. There is deadpan spoken word on ‘Cut And Run’, and a touchingly honest attempt at melodic singing on ‘Daddy’, a harmonised duet with Wolf Alice’s Ellie Rowsell. Slaves’ signature sound has matured a great deal, too, on Acts Of Fear And Love. Their beloved early singles and debut album arrived like a mockney bulldozer, all raging riffs, pounding drums, and vocals sounding like a fight scene from ‘EastEnders’. There are still plenty of vintage Slaves thrash-outs on Acts Of Fear And Love, but even these seem to be more well executed than much of their back catalogue thus far.

Recent single ‘Chokehold’ is made in the Are You Satisfied? mould, but sounds more complete than most tracks on that debut album. ‘Bugs’ is another back-to-basics romper with a big sing-along refrain about “another let down generation” and hectic key changes. However, it is the subtler tracks on Acts Of Fear And Love that make it a more fulfilling listen than any of the bands previous two albums. ‘Daddy’ is stripped back to clean guitar and vocal duet, and is reminiscent of some of Nirvana’s gentler cuts, and ‘Photo Opportunity’ is a real highlight on the album – soft waltzing guitar giving way to a belting chorus. Closing title track ‘Acts Of Fear And Love’ has a similar dynamic shift, with spoken word mumbling erupting into a soaring refrain.

This aging is understandable. Since the release of 2016’s Take Control, guitarist Laurie Vincent has had his impossibly adorable and already Instagram-famous son Bart and, accordingly, has grown a moustache. This may be one reason as to why the band sound much more down-to-earth than on previous efforts. Their giggly sense of humour is left well in tact on Acts Of Fear And Love, but has become less psychedelic and more rooted in real life. The contrast between early favourites like ‘Feed The Mantaray’ with new songs like ‘Magnolia’ is a bit like comparing ‘The Young Ones’ to ‘Peep Show’. Album opener ‘The Lives They Wish They Had’ takes shots at social media obsessives, the “weekend warrior come weekday slave”, and ‘Magnolia’ sees Holman fed up of the worry and anxiety caused by the “tap and swipe crack pipe”. The band’s unique take on the world is being seen less through a kaleidoscope and more through their own eyes, and it works in spite of the lack of mantarays.

Emotional honesty is certainly high on the list of priorities on Acts Of Fear And Love, but so is politics. In these tumultuous times, everyone wants to make their voice heard, and Holman and Vincent are no different. There’s the obligatory thinly-veiled reference to Brexit on ‘Bugs’ and dishonest politicians on ‘Photo Opportunity’, but nothing goes very far beneath the surface. To Slaves’ sizeable younger fanbase, Holman’s chant of “back pedal, back, too late, fuck you, we’re not having that” may sound like a revolutionary statement, but the band’s politics never get much deeper than that.

The thought of Slaves taking themselves seriously may not be an instantly appealing one – their whole aesthetic is built on surrealism and humour. Stick with it, though, and Acts Of Fear And Love will soon reveal itself to you as the best album Slaves have ever created. The duo’s personalities still shine through, and although it is not the most immediately “Slaves” album, it is their most personal and most thorough work to date. (8/10) (Louis Marlow)

Listen to Acts Of Fear And Love by Slaves here via Spotify, and tell us what you think below!