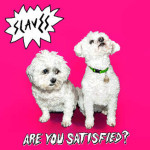 Front cover of ‘Are You Satisfied?’

Kentish punk duo Slaves, appropriately straight out of the town of Royal Tunbridge Wells, the nerve centre of Tory England and the home of the habitual Daily Mail letter writer ‘Outraged’, should be brilliant. I’ve followed their career with interest, listening to their shards of vitriol on numerous occasions, they’re the sort of band I ought to love – but I’m not buying the hype. They’re a perfect marmite band and doing well to ruffle the feathers of the critics. Made up of Laurie Vincent and Isaac Holman, the duo featured on the BBC Sound of 2015 poll and since the announcement the expectation for Are You Satisfed? has been constantly increasing. Hype can either make or break a band and for the time being Slaves are really milking it in true punk style. Recently featuring on Radio 1’s cover sessions, their cover of Skepta’s ‘Shutdown’ was particularly impressive, but can this sense of mischief translate onto record?

Are You Satisfied? is the follow-up to their 2012 EP Sugar Coated Bitter Truth and their blend of Cockney punk has seen them gained considerable attention. Personally, I can’t help but feel their act is a little contrived and a punk pastiche. There’s a certain cartoon element about the duo; from their on-stage shtick to their borstal-boy imagery. Their live shows are raucous. On-stage rants about Alan Titchmarsh, stage-diving, aggression and a hell of a lot of shouting; this is where they excel. The stand-up drumming by Isaac Holman has a certain Ian Curtis- and Jesus and Mary Chain aggressive style to it, which looks visually impressive. From the off, the album is tense and aggressive. The simple guitar riffs of ‘The Hunter’ and ‘Cheer Up London’ are anything spectacular both it’s the vocals which have a menacing, political edge. The latter mentioned track was released on the day after the release of the General Election results. Great timing by their label!

‘Sockets’ and ‘Feed The Mantaray’ are the stand-out tracks on the album. They perfectly capture ‘70s punk-era London combined with catchy White Stripes-esque guitar riffs. Teamed up with the screaming vocals of Isaac Holman, these two tracks represent the live aspect of what Slaves represent. There’s one issue which really irks me. Have a listen to ‘We Don’t Care’ by Audio Bullys and then take a listen to ‘Cheer Up London’ by Slaves. Tell me you can’t hear a similarity…

The duo then show that they can take the pace down on acoustic track ‘Are You Satisfied?’, which comes across as a raspy Jamie T cast-off. It has charm but it feels slightly misplaced in between two heavy tracks. It’s a minor flaw but it highlights that Slaves aren’t just resting on their punk rock laurels and are willing to experiment. The production is too squeaky clean for a punk record. It should be leaner, meaner and a bit dirtier. You need more than a good live performance to live up to the hype and on this record it sounds too self-conscious and contrived. From track one to track thirteen it’s all too formulaic, apart from the acoustic interlude of the title track. Their primitive sound wears thin very quickly and I’m finding it hard to reason why they a major label have taken them on board, especially with a sound that is so one-dimensional. (6/10)

Listen to Are You Satisfied? here!