REVIEW: Girlpool – ‘Before The World Was Big’ (Wichita) 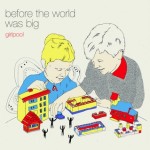 Front cover of ‘Before The World Was Big’

L.A.-via-Philadelphia punk duo Girlpool made one of the most bracing mini-LPs of 2014, their self-titled effort which was re-released by the prestigious indie imprint Wichita by the end of the year. Now up to their first proper album release Cleo Tucker (guitar, vocals) and Harmony Tividad (bass, vocals) (there is no drummer) use Before The World Was Big as a blank canvas to convey a complete distillation of their approach in just 24 minutes. Even the artwork seems to tell you everything you need to know about the duo – an image of innocence, featuring two kids playing with a model village, creating their own universe, denoting the mismatch of scale and simplified perspective children have of the world. Similarly, Girlpool communicate their highly biographical ‘us against the world’ using utterly basic song structures.

Tucker and Tividad’s unaffected vocal delivery is very similar to The Slits, the all-female British ‘70s punk band that gets nowhere near the recognition they should, and the ultra-economical, DIY arrangements hark back to Young Marble Giants and The xx. There’s the distinct feeling that you yourself could play these songs, with absolutely no understanding of guitars whatsoever. But the result is overwhelmingly intense and thoroughly compelling to listen to. Closing track ‘I Like That You Can See It’ is the perfect illustration of this ethos, where vulnerability is subverted to assert strength and confidence. “Is it pouring out my body? My nervous aching? I like that you can see it”, Tucker sings demurely, and it’s as if she’s standing in the same room, speaking only to you. As a means of communication, if puts the listener on the spot, making them an active participant in the give-and-take that constitutes all great modern art. There’s no place to hide in this music – everything is foregrounded, there’s no depth or hidden corners due to the brutal minimalism – but Girlpool make it a strength rather than a weakness.

The simple poetry in lines like “I took a walk down the street / found nothing under my feet” (‘Ideal World’). The lack of percussion makes the guitar and bass lines much more fluid and flexible – they can morph to fit around the lyrics, like on the title track, making them seem like reveries rather than narratives. On ‘Dear Nora’, Tucker and Tividad actually refer to each other by name, ramping up the intimate chemistry they demonstrate live and delivering it on record. The best-mates tale of ‘Pretty’ introduces some very subtle keyboard tones, but that’s the only concession outside of their rigid but surprisingly versatile guitar/bass combo. The slightly folked-up feel of ‘Emily’ shows definitively that such an approach absolutely is not one-dimensional, in fact capable of great variety and feeling. The fuzzy backdrop to ‘Crowded Stranger’ creates a different, more relaxing atmosphere for their voices to operate in, as well as providing a useful change in mood in the album’s second half. Though it is very short, Before The World Was Big is a startlingly honest and true piece of work from a young group that clearly has the potential to do great things. (8/10)

Listen to Before The World Was Big here!