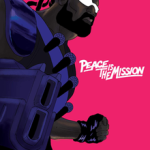 Front cover of ‘Peace Is The Mission’

The brainchild of US super producer Diplo, Major Lazer are probably most well-known for their hit track ‘Pon De Floor’, which featured on Beyonce’s hit ‘Run The World (Girls)’. Their blend of Jamaican dancehall made them an overnight success on their 2009 debut, Guns Don’t Kills People…Lazers Do and the trio have brought the dancehall style back to prominence. With an ever-changing line-up of guest stars Major Lazer have undoubtedly become one of the mainstays on the US EDM scene. Although the aforementioned acronym makes me go cold, it is certain that Diplo and his gang have become producers in demand.

The new effort Peace Is The Mission is the first of a two-part project, the second of which is due in 2016 and will be called Music Is The Weapon. Just like the debut and 2013’s Free The Universe, it features a whole host of guest artists, including Ellie Goulding, Pusha T and Ariana Grande. Stylistically this is the heaviest album they have released so far and leans more towards a fist-pumping electronic sound. ‘Can’t Stop Now’ and ‘Mary Jane’ from their debut had a unique charm with a distinct old school dancehall influenced sound, whilst their follow-up was leading towards the money-filled EDM.

Sadly Peace Is The Mission lacks the charm of their debut and the power of the second. ‘Night Riders’ feels a little formulaic and heavier on the hip-hop influences, as is ‘Roll The Bass’ which is an EDM template. We then go into power-pop territory with Ellie Goulding on ‘Powerful’, in which she shares the vocals with Tarrus Riley. It’s a decent enough track but goes by relatively unnoticed. ‘Be Together’ and ‘Light It Up’ are the peaks of the album and hark back to the dub/dancehall/electronic influences. Rather than going all out on the bass and drops they let the vocalist come to the forefront of the tracks. ‘Blaze Up The Fire’ perfectly highlights their signature sound. The choppy cuts and bass is slightly into overkill. A slightly minimalistic approach may have made the track easier to appreciate.

Peace Is The Mission is ultimately marred by Major Lazer missing the point of their appeal and their originality the first time around. It now sounds generic and bland, whilst losing their minimalistic dancehall approach. Though it’s fairly digestible at only 32 minutes, Diplo has thrown everything at the wall and about half of it fails to stick. While there are some positives, they tread into overkill territory with their signature sound. Diplo needs to get back to basics next time around. (5/10)

Listen to Peace Is The Mission here!

It won't do anything to win back any previous fans,…