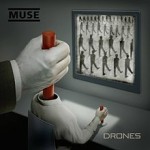 Ever since the masterful Black Holes And Revelations in 2006 and the legendary shows at Wembley the following year, Muse’s chief concern has become the live arena rather than the studio. It’s something that happens to all truly massive bands – U2, Depeche Mode, Oasis, Coldplay to name a few – their albums become an excuse to tour, pack the arenas and coin it in. The audience, likewise, knows this, and dutifully attends for the live spectacular, whether they own the new album or not. But Muse were once a band that did both: creating extraordinary art on records and bringing it to life on stage. 2011’s Reading and Leeds headline slots, in which they played the entirety of Origin Of Symmetry to mark its tenth anniversary, reminded everybody that the band’s standards had slipped, and the preposterous dubstep dabblings on 2012’s The 2nd Law compounded that suspicion.

So, for their seventh album Drones, Matt Bellamy and co. have indicated a back-to-basics approach of sorts (well, as basic as you can get with Muse), reflected in the tiny live shows earlier this year. They’ve trimmed the genre experiments and the multi-part symphonies we heard on The Resistance and The 2nd Law, and delivered a concept album. In Bellamy’s own words, “[the] album explores the journey of a human, from their abandonment and loss of hope, to their indoctrination by the system to be a human drone, to their eventual defection from their oppressors”.

A 21st century re-make of The Wall, essentially. But from a guy who once believed that 9/11 was a conspiracy, this doesn’t bode well at all. It also doesn’t help that virtually all of the track titles look like they might have been named by some Muse song title generator app (‘Psycho’? Check. ‘Revolt’? Check. ‘Aftermath’? Check. ‘Mercy’? Full house! Thanks for playing portentous bullshit concept album bingo!). True to form, Bellamy’s lyrics on Drones are utterly cringeworthy, to the point you actually feel embarrassed for him, a man in his late thirties who still writes like a 16 year old politics student, but we’ll skip over this for now.

Sonically speaking, the Teignmouth trio basically don’t have many tricks left to pull anymore, no space to truly innovate. When your stock-in-trade has become a reputation for being ludicrously, spectacularly over the top, there’s a limit to how preposterous you can become. So their response has been to return to their rock. Not that Drones is in any way stripped-down or minimalist: it’s simply that the most egregious instances of excess have been reigned in. Nearly two decades and seven albums in, we know what we’re going to get with Muse by now: nonsense. The crucial question, therefore, is whether it is compelling nonsense. Rarely, is the answer. For most of Drones, the feeling is that Muse are simply playing at you, trying desperately to prove a point, rather than letting their innate, audacious musical ability lead you on a journey.

Most songs are imposing, grey monoliths rather than all-encompassing mini-universes like so many of their finest moments from Origin to Black Holes. ‘Dead Inside’ begins things promisingly, with Chris Wolstenholme’s bass and Dom Howard’s drums interlocking gracefully in a rhythm faintly reminiscent of ‘Supermassive Black Hole’. Bellamy’s character is supposed to be fresh meat for the system by this point, but his lyrics like “do you have no soul / it’s like it died long ago” suggest a deeper meaning, possibly referring to his recent divorce from Kate Hudson.

But very quickly we get into Muse-by-numbers territory. ‘Psycho’ is a fine, blocky rock song that Muse themselves have already written on at least three occasions (‘Time Is Running Out’, ‘Uprising’, ‘Supremacy’), only this time they’ve nicked the monstrous bass figure from Tame Impala’s ‘Elephant’. When Bellamy goes hammer-and-tongs at daft lyrics like “your ass belongs to me” in full operatic mode, it’s difficult not to admire them. Even the awful army drill sergeant samples can’t derail it. The pianos of the functional ‘Mercy’, similar in cadence to those of ‘Starlight’, scream ‘radio hit’ with breathtaking unsubtlety.

As the protagonist becomes more self-aware and seeks to break free, so Muse’s arrangements loosen up to offer a bit of space for the narrative. ‘Defector’ is entertainingly histrionic in the finest traditions of Queen, and ‘Aftermath’ is even quite emotional and heart-swelling, proving that Muse can be at least as effective when they lay off the noise as they are when they’re going full tilt. The ‘Reapers’, with full-on glam-rock guitar shredding ballistics, teeters on the very edge of tedious fretwankery but just about restrains itself.

But at no point do you get truly swept away with the album’s conceit. With the exception of the sprawling 10-minute epic ‘The Globalist’, which covers everything from Morricone to Metallica with a bit of Elgar thrown in for good measure and ironically the most over-the-top moment on an album that’s supposed to see them reconnect with their rock roots, nothing really offers the listener the opportunity to actually imagine the dystopia the band is attempting to paint. It’s certainly much too humourless to be meant as ironic or arch. Muse have always been much more effective when they allude indirectly to these themes, of shadowy forces behind the scenes pulling the strings in accordance to some grand blueprint for humanity. By addressing them directly, Bellamy sounds a tedious sixth-former who’s just discovered George Orwell. “I have been programmed to obey / I will execute your demands” he goes on ‘The Handler’, just one of dozens of instances of the gratuitous use of buzz-words like ‘command’, ‘defector’, ‘truth’ and ‘expendable’. People often bemoan the dearth of pop stars discussing politics in their lyrics – when they’re as bad as this, it’s a good thing they don’t.

On the positive side, Muse’s attempt to construct a concept album is laudable, no matter how flawed the result. In an era where the format itself is becoming increasingly underappreciated, it’s good to have such a high-profile band dedicated to making art that only makes sense in a full album setting. Furthermore, the concept itself has at least given them a focus for their sonic ambitions this time, immediately making Drones superior to The 2nd Law, and the first half of the album will sound absolutely fantastic in the live setting. But over an hour-long record, Muse end taking themselves much too seriously for their own good – a little levity and a bit less of the furrowed-browed seriousness could have seen them rediscover their greatness. (5/10)