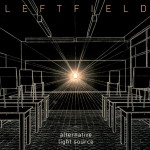 Cult heroes Leftfield were one of the holy pentangle of British dance acts in the ‘90s, along with The Prodigy, Underworld, Orbital and The Chemical Brothers. Just like those heavy hitters, Neil Barnes and Paul Daley were able to win critical respect as well as do serious damage to the charts in the decade when big beat ruled supreme. 1995’s Leftism is one of the finest artefacts of that era, uniting fans of dub, house, trance and techno as one tribe and setting a template for dance music that others followed for years, and 1999’s solid Rhythm And Stealth continued the good work. But Barnes and Daley fell out rather acrimoniously at the turn of the millennium, and Leftfield has been mothballed ever since. Barnes, however, has taken it upon himself to revive the Leftfield name without his partner-in-crime and produced the first new material in 16 years.

Wisely, Alternative Light Source sees Barnes play up to Leftfield’s fearsome live reputation as having one of the loudest sound systems in the business, and made a record that will sound absolutely brilliant in the live setting. Aside from some concessions to the cavernous productions of dubstep, he’s not tried to meddle with the chemistry of the music too much, with the result that it can respectably sit alongside the rest of the back catalogue despite the huge temporal gap.

Another great thing to see is that Leftfield is still capable of bringing in decent guest stars from an array of indie disciplines. Poliça’s Channy Leaneagh crops up twice, firstly on the spiky and atmospheric ‘Bilocation’. She appears again as a bit-part player on the retro house of ‘Little Fish’, whose synths rise like Vitalic’s ‘La Rock 01’ and is reminiscent of Rhythm And Stealth’s brutally basic club banger ‘Double Flash’. TV On The Radio’s Tunde Adebimpe helps ramp up the claustrophobic atmosphere on opener ‘Bad Radio’, whose swingeing breakbeat thuds totally evoke the original spirit of prime-time Leftfield, like being trapped in a tiny underground sweatbox club. It’s like they’ve never been away. That feeling continues on the mesmerising single ‘Universal Everything’, an absolutely pulsating house monster that features a classic drop and razor-sharp synths, and the relentless drive of ‘Shaker Obsession’.

Jason Williamson of Sleaford Mods contributes a hilarious spoken-word part to ‘Head And Shoulders’, channelling a stream of nonsense non-sequiturs like “dandruff warriors”, “scalp and chips” and “chicken in a basket” on top of a commercial dubstep and house combo that somehow manages to work. It’s infinitely more charming than his recent lairy turn on The Prodigy’s ‘Ibiza’ on The Day Is My Enemy. There’s a number of more ambient moments to break up the pace, just like on Leftfield records of old, but disappointingly they’re of little consequence and only really there for structure, except for the cloudy, brooding ‘Dark Matters’.

With Leftfield’s return, the last significant absence from the ‘90s dance revival in the ‘10s is now resolved. All of the acts mentioned in the first paragraph have recently made, or are making, new material, and with the exception of The Prodigy’s recent turgid effort, they’re also all worthwhile additions to their respective back catalogues. While Alternative Light Source isn’t consistently great enough to touch Leftism, it’s certainly picked up where they left off in 1999, and should show some of the modern flashy EDM producers how it’s really done. The handful of less memorable moments are more than compensated for by some truly tremendous peaks. But let’s hope Barnes doesn’t leave it another 16 years before album four. (7/10)