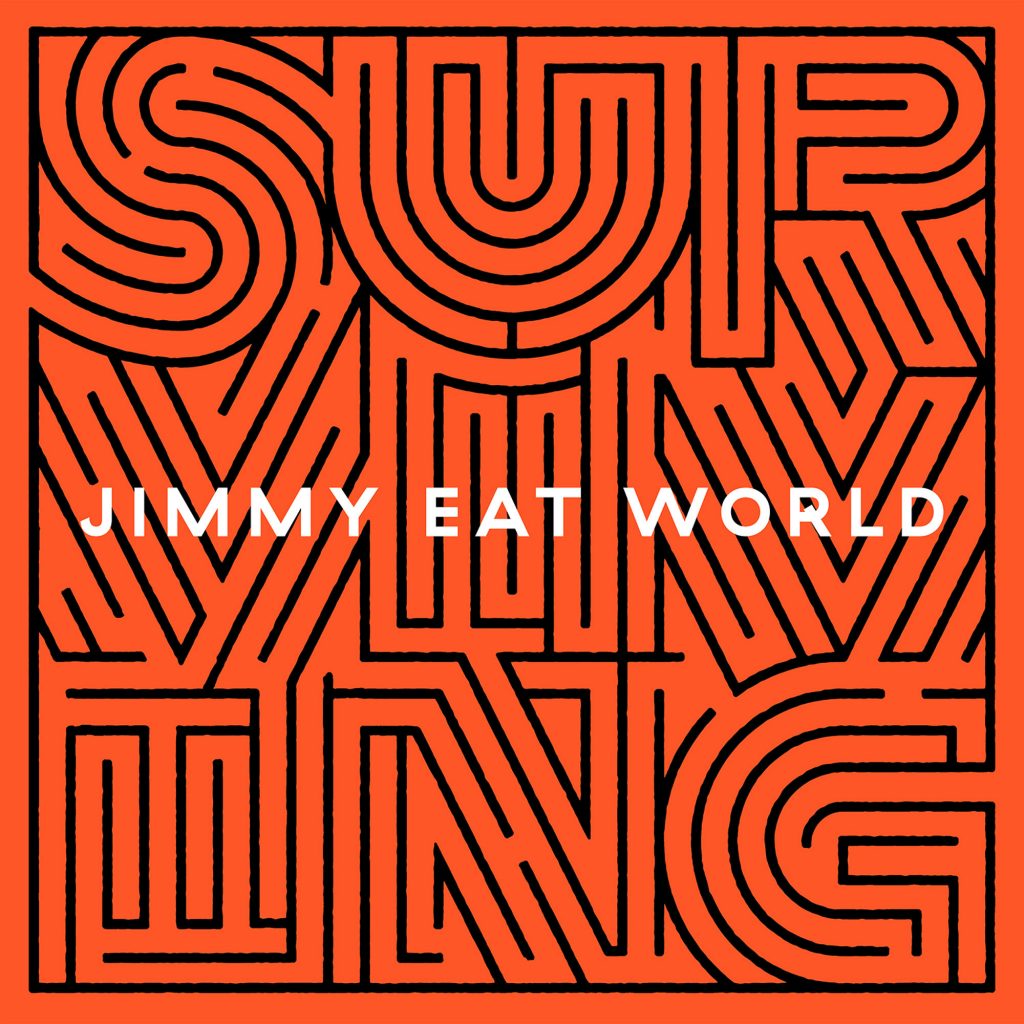 Some aspects of ‘Surviving’ might make it alarming for long-term fans, but the record is one of Jimmy Eat World’s most quietly innovative.

In a career spanning 25 years and nine albums, Jimmy Eat World continue to impress with Surviving, their 10th studio effort. When you first look at the artwork of the band’s new album, all you see is a maze. Until you realize that maze is the album title hiding in plain sight. Is the band hinting at a tone or message that tries to get across of something that appears to be one thing but is actually something else?

Yes, they are. Surviving is about what prevents you from operating in the mode of living that is more about living rather than existing, the songs deal with what prevents you from doing and what you have to overcome. It is basically an exorcism of depression and self-doubt. Several songs on the record might sound like as if they were inspired by their preceding records, but Jim Adkins asserts that “There was no looking back while coming up with the record.”

Surviving starts off with its title track, with an amazing riff and drums combination that would have fit right in with the Bleed American era. An absolute banger, the first couple of lines “Don’t hide your face, what you were before” really establishes what the album is all about. Following this song comes ‘Criminal Energy’, easily the standout of the album, imitating ‘Surviving’ but going a step further with a ripping solo and hard-hitting drums. ‘Criminal Energy’ is used to describe a moral sickness that makes you choose poorly. It deals with the fact that no one can escape the voice that haunts you and your rationality when you make bad decisions.

With ‘Delivery’, Jimmy Eat World begins to change both pace and genre into something that is slower and gentler, focusing on the message. It is about the battle to stay present in the interactions with other people. ‘555’ feels like the black sheep of the album, with the heavy use of synths and sounding more pop than rock. The unique sound can be credited to the fact that ‘555’ was last song to be conceptualised and recorded after 15 songs. “It is about acceptance and feeling like you are never going to win despite doing everything right and it’s easy to get lost in a sense of self-pity, but you’ll never leave that place of self-pity unless you come to acceptance” says Adkins.

‘One Mil’ is basically a singalong about being a loser, where the band returns to rocky roots. ‘All The Way (Stay)’ is inspired by ‘80s rock, as it follows the gag where you expect a ripping solo at the end but it starts fading out. The end is basically a jam where the saxophone is the focus, and they pull it off, but barely. The development of this song started after 2001’s Bleed American, but it did not fit anything until Surviving. ‘Diamond’ is about the inability to accept incremental change. It continues with the late ‘90s-early ‘00s rock sound.

‘Love Never’ is about the unhealthy expectations that love will complete us. But until you put in as much love as you hope to get, you will always be disappointed is the message of this song. ‘Recommit’ is about battling about what society thinks you need to be doing, fight against being pressured to present this fake version of ourselves. ‘Congratulations’ sticks out, simply by being totally different. Long, mysterious, and thoroughly compelling, it is the mark of a band that is not confined by its past or constrained by its future.

Surviving is centred around the concept of less is going to be more, evident in the use of silence which is a lot more prominent than any of their previous records, which makes the overall tone heavier and really drives the message home. Though there isn’t much musical deviation from the band’s past output, Surviving sees the drums hitting harder, and the guitars packing a greater punch, audibly backing up these lyrics of hope and rebirth in their own way. To any long-term fans enamoured with their huge discography, Surviving might be a difficult pill to swallow at first. Other than the first two tracks, the rest of the songs feel mellow and straight up ridiculous – ‘555’ is really alien, as is the saxophone solo in ‘All The Way (Stay)’ – but upon repeat listenings of the record, everything feels normalised and in place. The lyrics across the songs are heavy and provoking. In the end, this is one of their better and more surprising works as compared to their discography. (7/10) (Aryan Agarwal)

Listen to Surviving by Jimmy Eat World here via Spotify, and tell us what you think below!