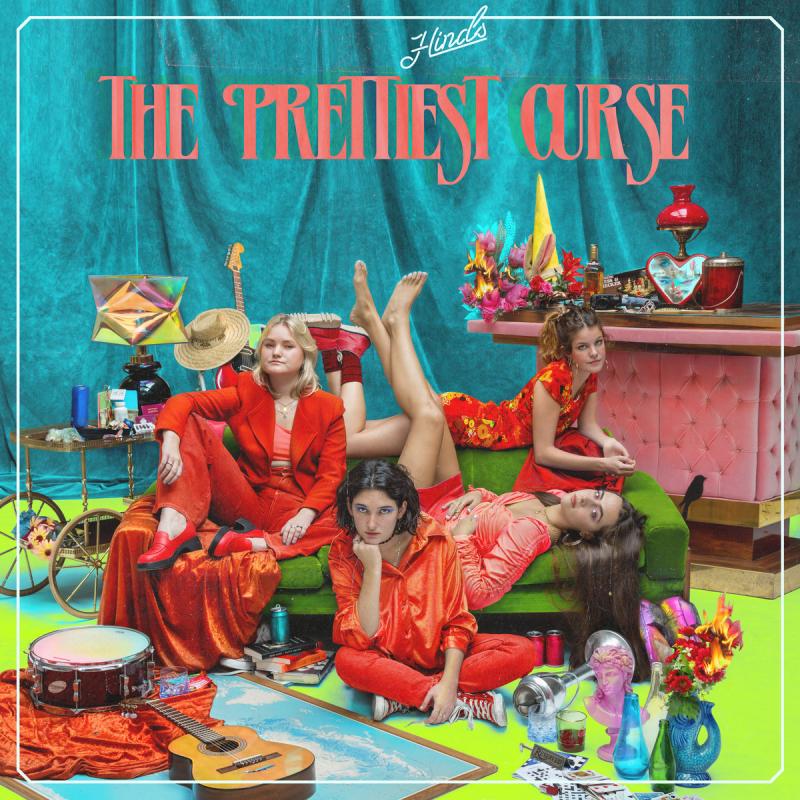 Lo-fi garage rock band Hinds are back with their third full-length offering The Prettiest Curse. This four-piece, famed for their trademark “rough around the edges” production style, including the intimate, distorted vocals that helped put the Strokes’ Is This It on the map, as well as their sloppy lead guitar lines and effortlessly catchy chorus hooks, have undoubtedly divided opinion within their native Spain (as this article from El Mundo would attest). Indeed, co-lead singer Carlotta Cosials’ nasal, almost child-like vocal delivery has been a fairly consistent source of derision. Nevertheless, the quartet have been able to develop a much more accommodating and loyal audience overseas, particularly in UK and the States, where their unique sense of “camaraderie”, to quote a fellow critic, engendered by the constant vocal interplay between Cosials and Ana Perrote, has proven to be an alluring factor. Consequently, one can only expect this audience to widen as a result of this new release.

What we have here is a discernible continuation of the upwards trajectory initiated by the band’s previous album, 2018’s I Don’t Run, which was largely characterised by comparatively tighter instrumental performances and a marginally more palatable production quality than their 2016 debut Leave Me Alone. Furthermore, The Prettiest Curse sees the band adopting a noticeably broader sound pallet, no longer restricting themselves to their traditional guitar-bass-drums setup. This is demonstrated most effectively by the opening track ‘Good Bad Times’, which exhibits a synth-led new wave influence previously unheard of within the band’s catalogue. Although it may seem unoriginal within the current musical landscape for a group to pay such a nostalgic homage to the Eighties, it is nonetheless a breath of fresh air, especially coming off the back of two stylistically homogeneous records.

This is followed up with ‘Just Like Kids (Miau)’, a two-minute long bundle of joy, in which Ade Martín’s bass comes to the forefront of the mix. The aforementioned camaraderie is best exemplified here, particularly at the song’s climax, where Cosials and Perrote shriek the title of the album at the top of their lungs which, when paired with the extremely dense vocal production, creates a cacophony that has since become one of Hinds’ key characteristics. What’s more, you can’t help but love the music video, which is simply overflowing with carefree charisma.

The Prettiest Curse also contains a handful of simple yet highly enjoyable upbeat rock tracks, such as ‘Boy’, ‘The Play’ and ‘Burn’, the latter of which finds Cosials adopting a rather stuttering vocal style in the verses, reminiscent of something Stephen Malkmus might have pulled off on Pavement’s Wowee Zowee, before bursting into a rousing singalong chorus that Pavement could only dream of. The clunky lead guitar work is out in full force too, which may either damage the songs irreparably or provide an additional layer of charm to proceedings, depending on which way you’re inclined.

However, it must be said that the two remaining singles released from the album, whilst likable, do leave a little to be desired from a song-writing perspective. Firstly, the resemblance of ‘Riding Solo’ to MIA’s ‘Paper Planes’ has already been frequently pointed out, due to its hip-hop tempo and repetitive two-chord pattern. However, what ‘Riding Solo’ unfortunately lacks is the originality and consequent memorability of the latter. Nevertheless, one way in which it does succeed is that it represents a breakthrough for Hinds from a production standpoint, constituting easily the most sonically adventurous track that the quartet have offered to date.

Meanwhile, the band reconnect with their Spanish roots on the romantic acoustic number ‘Come Back And Love Me <3’, not just musically but linguistically, as the chorus takes the form of a call and response between the English title and Spanish lines such as “Vente y te dejo ganar” (“Come back and I’ll let you win”) and “Es que odio esta manera de jugar” (“I just hate this fooling around”). Indeed, the way in which the verse freely shifts between the bright and breezy natural major and the bittersweet melodic minor scales beautifully reflects both the love the protagonist has for their significant other and the deep yearning they feel due to their absence. The problem, however, lies within the chorus. Following up such a wonderfully expressive verse was always going to be a challenging task, yet opting for an overly simplistic, repetitive two-chord progression was evidently not the right answer. Furthermore, the fact that the second chorus leads straight into and forms the basis of an extended outro, with no subsequent nods back to the verses, only exacerbates this problem, ultimately leaving a bitter taste, and the nagging suspicion that this could’ve been the best song of their career so far, yet ended up falling agonisingly short of the mark.

As for the closing section of The Prettiest Curse, we’re delivered with ‘Waiting For You’, a solid, if not relatively generic penultimate track, before the album wraps itself up with the slow burner ‘This Moment Forever’. Setting off from a humble beginning, much like what you’d expect from a group like Elbow, before embarking on a glorious crescendo where Carlotta lets out one final scream, this track merely proves that the band’s capacity to produce mature music has come along in leaps and bounds since their 2016 debut, and is the perfect embodiment of Hinds’ continual growth as songwriters and musicians.

And it is this growth and maturity, alongside the augmented production value, that ultimately substantiates the possibility that The Prettiest Curse might be their finest album yet. Sure, as we’ve established, it has its imperfections, some of which only further the album’s charm, whereas others constitute genuine drawbacks, and few would deny that there is still room for improvement here and there. Nevertheless, by building upon the successful aspects of I Don’t Run, whilst simultaneously incorporating a range of new elements into their sound without squandering the capacity to produce a more or less consistently enjoyable piece of work, Hinds give the undeniable impression that their creative peak is still very much ahead of them. (7/10) (George McKenna)

Listen to The Prettiest Curse by Hinds here via Spotify, and tell us what you think below!