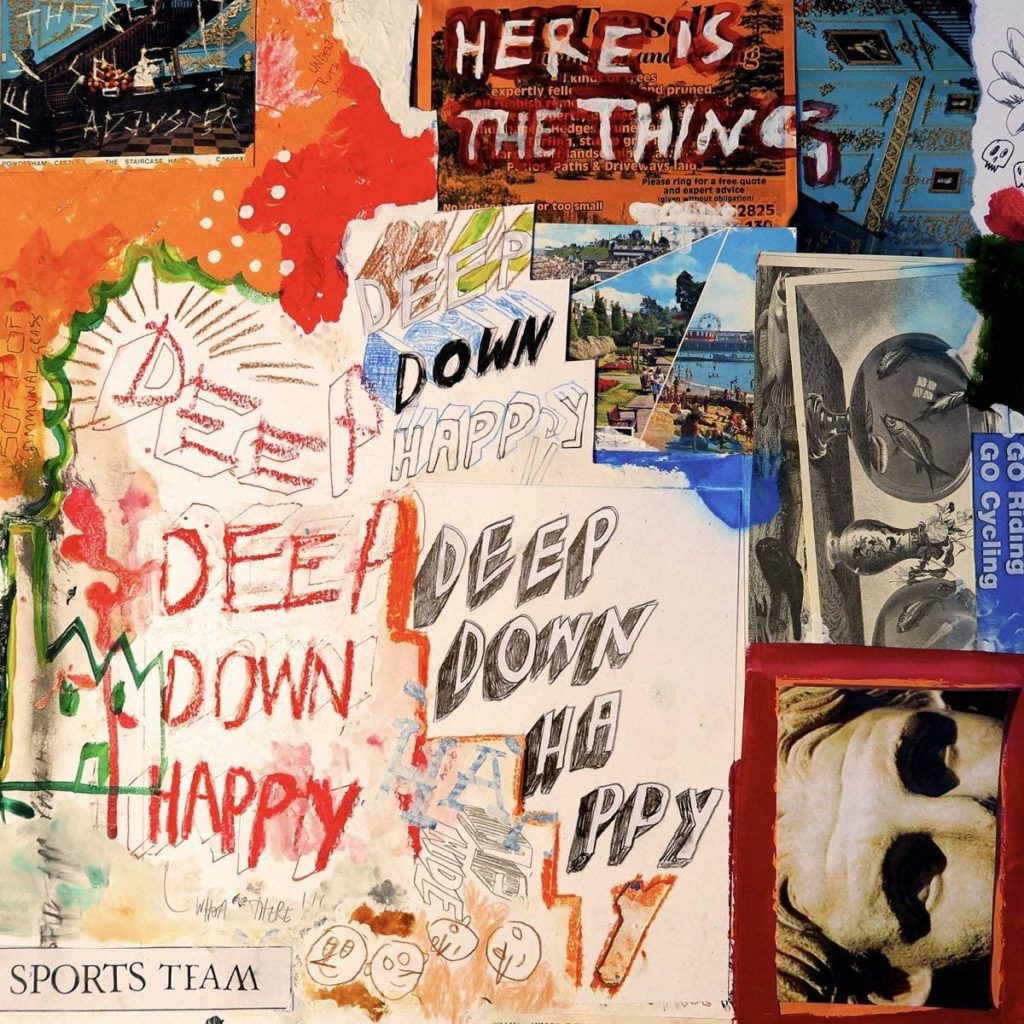 A strong element of the emperor’s new clothes about Sports Team’s ultra-generic debut album ‘Deep Down Happy’ speaks to a deeper problem in British ‘alternative’ music.

At a point in time where issues such as inequality and privilege are more urgently discussed than ever before, it does feel rather too uncomfortably familiar to see another debut album from wealthy white kids heralded as the saviours of British indie up for review. Then again, Sports Team have always acknowledged their middle class luck and privilege, and have sought to build that self-awareness into their charm. Finding their muse in the prosaic and the mundane – identical town and city centres up and down the nation – and the anonymity of the their collective upbringings (“very, very boring suburban places”, according to co-songwriter Rob Knaggs) their art has been divisive since the beginning, exemplified by the Twitter ruck in the aftermath of a Guardian interview at the end of 2019.

Following a long string of singles that have been increasingly hammered to death through incessant Radio 6 rotation – seriously, Steve Lamacq has really lost his radar in the last decade – their first full-length album is with us, and it’s disappointing but not completely surprising for us to conclude that it’s a mis-fire. The issue with Deep Down Happy isn’t that it’s made by Oxbridge graduates – that much ought not to invalidate anybody’s artistry – but that it’s too predictable. Although it’s a snappy, economical collection of a dozen tracks clocking in at just over 37 minutes, there’s too many points at which it feels like an anonymous procession of choppy, scuzzy indie-rock number after choppy, scuzzy indie-rock number without any distinguishing features. It’s like eating processed food: a) the empty calories will fill you up for a bit, but you’re craving proper sustenance before too long, and b) it’s simply an imitation of something that’s already been done far better elsewhere.

Their exploration of the quirks and traditions of Middle England and suburbia puts them in a rich and storied tradition of British rock songwriting, mining from the same seam as the likes of Ray Davies, Paul Weller and XTC’s Andy Partridge. Sports Team certainly talk the talk in their interviews, but Deep Down Happy doesn’t walk the requisite walk. Everything’s all very industrious and furrowed-of-brow – drums rattle, tightly coiled guitar riffs chug and swoop, the basslines always on their heels, and Alex Rice’s vocals paint pictures of situations and characters with earnest. But there’s a shortfall in terms of identity, substance and humour – virtually every track sounds the same as all the others. “I’ve been thinking a lot / but mainly outside of the box” goes opening track ‘Lander’. Not much evidence of that in Deep Down Happy, however, as most of it sticks very firmly to convention.

The singles ‘Here’s The Thing’ and ‘Fishing’ are decent enough by themselves, the latter reminiscent of Noughties one-hit wonders The Holloways, but both have had their appeal drained through radio overexposure. This particular aspect isn’t really Sports Team’s fault, but it’s a by-product of over-hyping from an indie scene desperate for worthy poster boys, and that almost all of Deep Down Happy cleaves so closely to this formula makes for a monotonous experience. It’s a product of a long-unchallenged mindset that dictates if you play a guitar like this, hit a drum like that, deliver a vocal with a frantic bark, that it somehow equals ‘proper music’.

Sports Team certainly aren’t first band to make music that sounds too much like their idols, and definitely aren’t the most egregious offenders on this front, but there’s a serious problem when this kind of thing gets marketed as The Next Big Thing, particularly when there are already much better or more promising artists out there in Britain’s independent scene. It points to a collective failure of imagination, from artist to industry, the latter of whose gatekeepers are still far too in thrall to the same old unchanging canon of indie greats. It’s not hard to imagine that the people at Universal who brought them in to the fold were university undergrads during the mid-Noughties, and who are now pushing a band that reminds them comfortingly of their youth.

On the positive side, there is evidence that Sports Team have a distinct personality that could emerge in the future. “He’ll never buy you a drink / But he’ll let you know he can” goes a scathing comment on a selfish boomer type in ‘The Races’, demonstrating that Rice and Knaggs are at least barking up the right tree in terms of their character studies. The commendable ‘Long Hot Summer’ heralds the middle section of the album with a very welcome and much needed change of pace, as does ‘Born Sugar’. ‘Kutcher’, several years old by this point, is a fairly enjoyable channelling of American indie-rock from around the turn of the millennium. In these rare moments, there’s just about enough charm and personality to suggest something better down the line.

Deep Down Happy will satisfy Sports Team’s incredibly loyal fanbase, ticking all the boxes that won them that hardcore following in the first place. All power to their elbows, but it’s hard to see how anybody else will be converted on the evidence here. For the rest of us, conscious yet unimaginative revivals of arch Britpop lyricisms and American alternative-rock just don’t seem like enough anymore. (4/10) (Ed Biggs)

Listen to Deep Down Happy by Sports Team here via Spotify, and tell us what you think below!