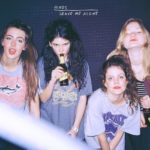 Front cover of ‘Leave Me Alone’

Hinds, or Deers as they were formerly known, have appeared on numerous “One To Watch” lists over the last two years. It’s been a busy a busy few years for the Madrid quartet after a legal battle forced their hand into changing name – a ‘hind’ is a female deer, fyi. Spurred on by the inconvenience, the all-female group have toured relentlessly throughout 2015 in anticipation of their debut record, laying the groundwork for a positive reception.

Leave Me Alone is a lo-fi scuzzy pop record filled with pop gems and was recorded over the period of 12 months – in between tours. The record drifts between garage rock, Phil Spector-style harmonising and the camaraderie and boisterousness of The Libertines. Holly Golightly’s 2000 album God Don’t Like It seems like an influence with a heavy nod towards surfy guitar riffs and lyrics pointing towards feminist issues.

‘Bamboo’ has floated around for the last couple of years and its lo-fi production and accentuated Spanish vocals throw it against the grain of traditional all-male garage rock bands. ‘Garden’ has plenty of attitude whilst maintaining an element of innocence in the vocal delivery. However innocence is the last thing on the mind of Hinds.

Tracks including ‘San Diego’ and ‘Castigadas En El Granero’ have an element of defiance highlighted by the impressive vocals of Carlotta Corsials and Ana Garcia Perrote. There’s charm in tracks such as ‘And I Will Send Your Flowers Back’, which is almost delivered in a conversational style. It’s easy to become absorbed in their familiar sun-drenched harmonies as the album progresses into lullabies, with ‘Solar Gap’ being a particular stand-out.

Garage rock has become increasingly stagnated over the last few years, but Hinds are certainly a breath of fresh air. It’s mostly in the live environment where Hinds cut their teeth, but Leave Me Alone highlights that the tightly-knit gang are in in for the long-run and can translate that power onto record. There’s plenty of promise here and 2016 will be set to be a very busy year for Hinds. (7/10)

Listen to Leave Me Alone here, and tell us what you think below!