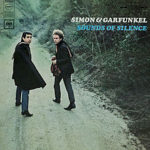 Front cover of ‘Sounds Of Silence’

Given that their 1970 swansong Bridge Over Troubled Water is one of the biggest selling albums of all time, Simon & Garfunkel’s career started inauspiciously to say the least. Having started life as the squeaky clean teen harmony duo Tom & Jerry, their 1964 debut under their own names, Wednesday Morning, 3 AM, disappeared without trace. Consisting mainly of faithfully rendered folk standards and a few mild and unremarkable originals, it contained very little sign that this was a duo destined for great things. That is, except, a rather charming if desultory track called ‘The Sound Of Silence’.

Having initially disbanded in late 1964 because of the disheartening reception the album received, Paul Simon and Art Garfunkel went their separate ways. However, the song gradually began picking up radio airplay at the back end of 1965, and its producer Tom Wilson quickly threw together an overdubbed version with electric instrumentation to capitalise upon this, which promptly shot to the top end of the Billboard Hot 100, eventually reaching Number 1 at the start of 1966. Having found national success in their absence, the duo agreed to give things another try and hastily recorded an album to take advantage of their situation. The rest, as they say, is history.

A remarkable story, but a great single with some filler tacked on to the end doth not typically a great album make, you might say. Correctly, as it happens, as Sounds Of Silence is far from perfect. However, it’s the cultural significance of the impact the song and, to an extent, its parent album had on both its authors and the wider American pop scene that we wish to commemorate, and which make it noteworthy.

After that false start, Sounds Of Silence is the true beginning of Simon & Garfunkel’s story. Tacking with the pop headwinds of the time following the revolution of ‘folk rock’ that had arrived in 1965, it’s a mixture of humble, charmingly unassuming harmonising and delicate, jangling guitars. Paul Simon’s songwriting had yet to reach the levels of consistency for which Bookends and Bridge Over Troubled Water would be famed, but there were flashes of that brilliance.

First of all, that song: ‘The Sound Of Silence’ is simply one of the most important cultural moments in pop history. Capturing the dark mood of the era, in the aftermath of Kennedy’s assassination and the increasing urgency of the Vietnam issue, the track represents the coffeehouse folk scene of Greenwich Village colliding with the American mainstream, in a way that not even Dylan’s tracks had managed. Simon’s angst-ridden, post-adolescent and somewhat naïve lyrics about “people talking without speaking / people hearing without listening” had unexpectedly found an audience, with whom it resonated profoundly. At once peaceful yet stirring, at the same time relaxing and uneasy, it’s an enduring icon of sixties youth alienation.

This bookends the album along with ‘I Am A Rock’, a stylistically similar piece with ringing guitars and a gorgeous chorus, and another brilliant example of the duo’s dynamism and inherent strengths, even at this early stage of their career. Sadly, nothing else on Sounds Of Silence really stands up alongside these two tracks. ‘Leaves That Are Green’, featuring rather time-specific lines like “I was 21 when I wrote this song / 22 now but won’t be for long”, ‘Blessed’ and ‘A Most Peculiar Man’ are pale folk rock facsimiles; ‘We’ve Got A Groovey Thing Goin’ On’ and ‘Somewhere They Can’t Find Me’ are merely innocuous despite the decent execution. There’s a certain sterile, bookish studiousness about proceedings that very much marks these tracks as ‘of their time’.

Oddly, some more enduring moments come when Simon sticks to the acoustic guitar and doesn’t try to ‘push the envelope’ just because he feels he has to: ‘Kathy’s Song’, for instance is a lost little gem in the S&G catalogue; ‘Anji’ is a rare instrumental, a cover of a Davy Graham track; and ‘Richard Cory’ sees Simon adapt an Edwin Arlington Robinson poem about material wealth not equating with happiness and make it into a strange delight. It’s as a template for what came later, not what’s necessarily on it, which explains this record’s significance.

It may not be the most immediately well-known Simon & Garfunkel album, but its significance as a milestone in not only the group’s development but the evolution of the wider genre of folk itself was recognised in 2013, when the Library of Congress in the National Recording Registry announced that Sounds Of Silence would be preserved for all time in their archives. Only artefacts that are judged to be “culturally, historically, or aesthetically significant” are selected for such esteemed treatment. So, don’t just take it from us!

Influenced by: Bob Dylan, The Beatles, The Byrds, The Everly Brothers

Listen to Sounds Of Silence here, and tell us what you think below!