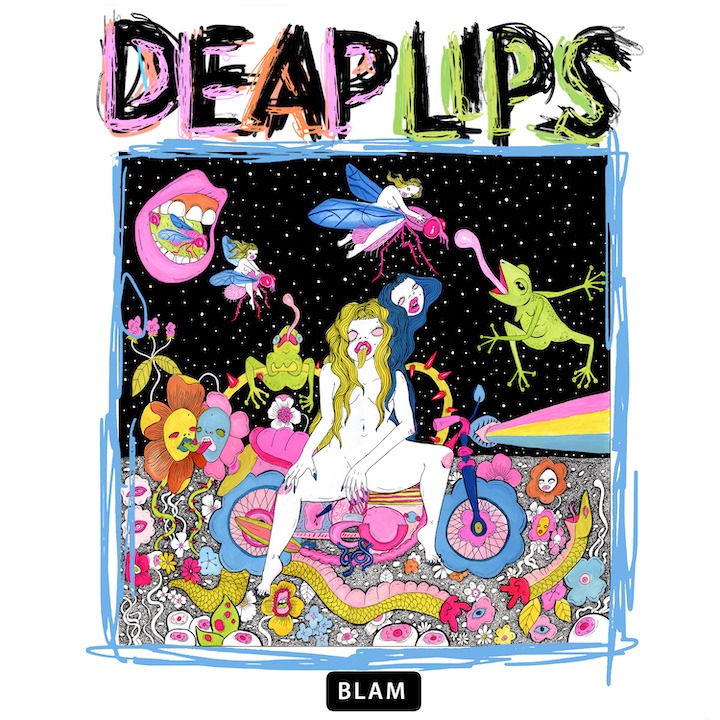 Deap Vally and The Flaming Lips join forces for ‘Deap Lips’, which is sadly less than the sum of its parts.

For most bands, a collaboration is a one-off endeavour. An opportunity to bring together minds with entirely different approaches and sometimes from entirely different genres, through which disparate styles can be blended and territories never previously set foot on can be explored. A perfect case in point, from the last five years at least, would be the unanticipated yet intriguing project FFS, consisting of Scottish indie-rock band Franz Ferdinand and idiosyncratic glam-rock legends Sparks.

Yet when it comes to The Flaming Lips, it’s hard not to recall what has since become rather an infamous meme and sigh, “Not another one?!” Not all have necessarily been well received either, from 2009’s somewhat misguided The Flaming Lips And Stardeath And White Dwarfs With Henry Rollins And Peaches Doing The Dark Side Of The Moon to their prominent appearance on the severely slated Miley Cyrus & Her Dead Petz album. However, in spite of the seemingly endless collaborations, the neo-psychedelic band have nonetheless maintained a steady stream of original material, most recently their 2019 Record Store Day release King’s Mouth, an album with an utterly bizarre underlying concept, but a musical style highly reminiscent of their 2002 masterpiece Yoshimi Battles The Pink Robots. Ultimately though, one would hesitate to call it a “return to form”, given the incredibly high bar set by the Flaming Lips’ late Nineties and early Noughties work, compared with its two pleasant but gently underwhelming successors The Terror and Oczy Mlody.

Then you’ve got Deap Vally, a California-based garage rock duo, whose two full-length releases to date have brought the band a reasonable level of indie credibility, so much so that they’ve earned spots opening for big names such as Muse, Marilyn Manson and Garbage. In spite of that, however, they have so far failed to elevate the band above underground status, and given the actual content of those two records, this is not surprising. Their brand of music, characterised by repetitive blues and stoner rock-influenced riffs, does wear thin after a handful of tracks, the sheer homogeneity of which, in addition to a generous helping of cringeworthy lyrics (“Get your hands off my raw material” indeed), only exacerbate this issue. Furthermore, one can’t help sensing that their rebellious, punk rock-inspired visual aesthetic only runs as deep (or should that be “deap”) as the surface.

So, the situation here involves two bands who are rather in need of some newfound inspiration, with the goal of either reclaiming a once flourishing past, as is the case with the Flaming Lips, or in Deap Vally’s case, breaking through into the big leagues of the American indie and garage rock scene. Is fusing themselves together into the fairly predictably-titled project Deap Lips the be-all and end-all solution to this dilemma?

The short answer: not really.

As expected, the Flaming Lips, as the more senior outfit, take centre stage here, while Deap Vally seem little more than a recurring feature. The musical style is almost 100% Flaming Lips, and at its best, this record finds the band not so much reinventing the wheel, but rather cherry-picking and recycling the brighter moments of their extensive back catalogue.

Sure enough, proceedings get off to a very positive start with ‘Home Thru Hell’, where we hear one of Deap Vally’s trademark fuzzy guitar riffs intertwined with robotic vocal effects and classic Flaming Lips balladry. The track itself feels like an outtake from the latter’s At War With The Mystics era, which, although certain factions of the Flaming Lips fanbase may disagree (why though??? It’s stunning!!), is surely no bad thing. The strong material continues with the brief but gorgeous ‘Shit Talkin’, a stripped down, 105-second long ode to escapism, which subsequently leads into the album’s finest moment, ‘Hope Hell High’. Another acoustic guitar-led ballad, this time accompanied by twinkling piano interjections and synthesised strings, one could be fooled into believing it was originally a deep cut from Yoshimi… itself. It may not quite reach the lofty heights of ‘Do You Realize??’ or ‘Fight Test’, but irrespective of that, Wayne Coyne’s pop songwriting prowess is undoubtedly on show here, even if exhibitions of such talent have been in short supply over recent years. Going well so far, eh?

Sadly, next up we get our first major hiccup. Deap Vally temporarily take the reins for ‘Motherfuckers Got To Go’, a two-minute-long garage rock number in their usual style, except slightly more repetitive and puerile than usual. But follow this up with another handful of quality tunes and all shall be forgiven…

Instead, we get a couple of functional yet ultimately forgettable tunes that succeed in very little apart from gradually causing the listener’s interest to erode away. However, what happens next is not so much erosion, but more accurately a landslide, as the album effectively falls off the edge of a cliff. I’m referring to ‘The Pusher’, an utterly monotonous, hollow, mind-grating dirge. The vocal melody consists of one solitary note, and although the accompanying instrumental may be providing a mildly intriguing melodic backdrop, the vocals just smother everything in a thick layer of aural manure, while the mind-numbing percussion only worsens this already miserable listening experience. If you’re susceptible to migraines, avoid at all costs.

At this point, Deap Lips is holed below the waterline, and sinking fast. ‘Not A Natural Man’ and ‘There Is Know Right There Is Know Wrong’ prove to be too little, too late. It really is a shame that the relative quality of the opening four tracks could not be maintained, or at least distributed, over the full duration of the album.

Nevertheless, Deap Vally should have every right to consider Deap Lips a success. It’s certainly a more varied and engaging listen than their previous two efforts, and that’s before even contemplating how much extra publicity this collaboration will have earned them. For the Flaming Lips, however, their golden age just seems to be drifting further and further away into antiquity. (5/10) (George McKenna)

Listen to Deap Lips by Deap Lips here via Spotify, and tell us what you think below!