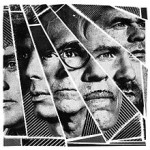 At first glance it is remarkably obvious how Franz Ferdinand have been inspired by ‘70s avant-garde pop group Sparks. Franz’s Alex Kapranos first mooted a hook-up with their quirky pop heroes more than a decade ago and, at long last, we get to hear what many of assumed only existed in his head. Needless to say, this collaborative effort FFS from both bands is immensely fun and humorous, typifying the art-rock values of different generations. ‘Collaborations Don’t Work’ was one of the first tracks they worked on and in typical fashion it notes how collaborations fail to be a success. In the case of FFS this couldn’t be further from the truth. The wry, humorous track races through different styles, ranging from lo-fi rock, electronic beeps, staccato pulses and a building piano coda.

Rather than each band doing a track each, there’s a genuine attempt by both bands to mesh with each other as naturally as possible, to resolve the few on-paper differences between the Franz’s and Sparks’ approaches, and Alex Kapranos and Russell Mael trade arch lyrics and knowing exchanges with consummate ease. ‘Things I Won’t Get’ reveals a greater Franz Ferdinand ballad influence, whilst ‘The Power Couple’ is a playful piano-stomper with typical Sparks keyboard interludes from Ron Mael. The two bands then combine for unified chorus. Jubilant sing-along ‘Piss Off’ ranks as one of the strongest tracks in terms of a Sparks influence. It’s flamboyant, upfront and a nod to ‘80s electronic outfits, including Devo.

As with any supergroup collaboration, leadership is called into question. They humorously address this on ‘The Power Couple’ in a playful, passive-aggressive ditty. Lead single ‘Johnny Delusional’ is electronic disco influenced tracks with a powerful nod towards Queen and Roxy Music. Its rousing chorus and synth inspired riffs are infectious and this makes it one of the strongest tracks on the album. The two bands feed into each other seamlessly on almost every occasion. The aesthetics and overall sound are achieved with aplomb. The operatic, theatrical nature of Sparks fits perfectly with the dry humour of the more guitar-inspired Franz Ferdinand. FFS is a smart record full of the quirky and unexpected turns which, paradoxically, is exactly what you would expect. It’s clear though that both bands equally respect each other and tongues are firmly in cheek! A must listen for an alternative music fan. (8/10)