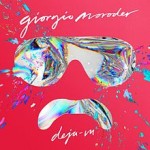 Since his sampled voiceover on Daft Punk’s 2013 album Random Access Memories, which in turn was a kind of tribute album to the man himself, legendary Italian-born producer Giorgio Moroder has seen something of a revival in fortunes in terms of his critical stock. Famed for producing hit records such as ‘Hot Stuff’ and the effortlessly futuristic ‘I Feel Love’, this is his first record since 1985’s collaboration with Human League frontman Phil Oakey. Déjà Vu, which exists largely due to the popularity of the American EDM scene upon which he’s had a tangible influence and the scribblings of hipsters, looks quite exciting on paper. But what comes out in the wash is entirely predictable and, quite frankly, very disappointing. Released on Sony, the album features a bunch of guest artists including Kylie Minogue, Charlie XCX, Britney Spears and Sia – all predictably on the same Sony label as Moroder. The man himself admitted that he wanted Lady Gaga and Rihanna, but he’s come away with second best here.

There’s nothing here that comes close to Moroder at his best. Rather, it sounds like the work of another producer trying to sound like Giorgio Moroder, with safe, solid and smooth results that become dull less than a minute in and rank among modern pop’s blandest collaborations. Britney Spears’ version of Suzanne Vega’s ‘Tom’s Diner’ showcases Spears as an Auto-Tuned has-been and the track does nothing to build on the original, or even attempt to update it. ‘4 U With Love’ is an AVIICI-lite fist-pumper, whilst ‘Diamonds’ featuring Charlie XCX includes a Kraftwerk-inspired backing vocal which is the most interesting aspect of the track. His own track ‘74 Is The New 24’ has been around since the end of 2014 and again features his distinct use of vocoder against a backdrop of bass-led synths.

‘La Disco’ is one of the few straight-up disco instrumentals which turns out to be a rare positive. It gives a nod to Daft Punk’s ‘One More Time’ and features a choppy Nile Rodgers-style guitar riff and has a perfect summer vibe. But the effect is like an echo chamber of pop, with Moroder’s new stuff being influenced, paradoxically, by people who were influenced by him in the first place. At 75 it’s hard to expect Giorgio Moroder to replicate the quality of the mid 1970’s. The vocoder vocals on ‘Back And Forth’ featuring Kelis are typically him, but it’s a real mish-mash of quality. Sadly, the great man falls desperately short here, and Déjà Vu is a weak, uninspired effort. (4/10)