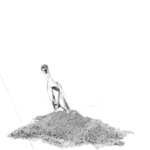 Franz Ferdinand & Sparks may have recently sung about how collaborations don’t work – oh yes, they do! Surf, a weird and wonderful record surprise-released at the end of May as a free download, sees a very unlikely (and probably one-off) combination of hip-hop upstart Chance The Rapper, young jazz musician Donnie Trumpet (the stage name of 21 year old Nico Segal), his backing band and a stellar cast of guests. Chance made arguably the greatest mixtape of the decade so far with 2013’s Acid Rap, and we’ve been waiting ever since for some more material from him. It’s the sign of a restlessly creative artist to step back from a potential major label debut (which would undoubtedly be massive) in order spend two years on a collaborative project that doesn’t even bear his name on the cover.

A few things before we start. Firstly, despite the name on front cover, many have chosen to analyse Surf as another Chance The Rapper album, since he is the star attraction for so much of the audience that it has found. While this might be considered a bit lazy, unfairly obscuring the contributions of the jazz musicians and producers, it is ultimately he who steals the show. Secondly we effectively get is a lot of rappers coming together to make something that doesn’t particularly sound like a rap album. Much like the work of Flying Lotus and Shabazz Palaces since the turn of the decade, it expands the concept of what rap can and should sound like, taking it round the houses and mixing it up with any amount of black genres – soul, R&B, jazz, funk, electro and splintered micro-genre of hip-hop itself. As such, it manages the difficult balancing act being avant-garde and accessible at the same time.

We begin with the hazy soul of ‘Miracle’, all bright colours and tones underscored by Chance’s signature drawl, and this segues into the soulful, pumping groove of ‘Slip Slide’, which features Busta Rhymes, B.o.B and Janelle Monae. Upon such sudden contrasts is Surf built, and it’s the secret to its success, just like the aforementioned FlyLo records. The bare-bones approach of ‘Caretaker’ is followed quickly by the ‘70s soft rock / soul combo of ‘Just Wait’, where Donnie’s wiry, reedy trumpet sounds almost like an electric guitar. The woozy, echo-laden instrumentals ‘Nothing Came To Me’ and ‘Something Came To Me’ are reverie-like pools but are followed shortly afterwards by the likes of the perky jazz and handclaps of ‘Sunday Candy’ or the lithe, nimble dancefloor number ‘Wanna Be Cool’. The basic, uplifting piano riff of the delicious slow jam ‘Familiar’ is a highlight, probably the most commercial thing on Surf.

Chance doesn’t feature on every track, aware that his continuous presence might unbalance the record or distract from the sparse, well-judged arrangements that are executed so beautifully by Donnie and his band. Chance often draws on childhood memory in his lyrics – many saw Acid Rap as an artist being forced to grow up before his time – but on tracks like ‘Rememory’, with its references to Peter Pan, it often seems as if he’s actually yearning for a return to that state of innocence. More conceptual moments like this are usually swiftly followed up with bright and breezy numbers suitable for early evening dancefloors, so it never weighs heavy on the listener. The guest stars – J Cole, Big Sean, Jeremih and Erykah Badu also appear throughout – play their parts magnificently but never steal the limelight from the creators or suck the energy out of the adjacent tracks. Every moment on Surf is as important as the last, and that’s what makes it cohere.

Throughout all the genre-hopping, Segal’s impressionistic work on the trumpet and Chance’s easy-going flows provide the consistent threads that hold it all together, reinforcing each other and built on a foundation of uncluttered production. All the time, you feel as if you’re being carried away on its creators’ flight of fantasy, and you almost want to block out the outside world so that it doesn’t intrude upon and burst this 52 minute musical bubble. Surf may be a defiantly non-linear experience, colouring outside of the lines and frequently spilling over into other genres in its sprawl of experimentation: however, this doesn’t mean that it’s an undisciplined album in any way. Quite the contrary, in fact, since the playful way in which its creators flit between moods and styles, like a camera focussing and re-focussing on different scenes makes it thoroughly refreshing each time you revisit it. Surf is an unexpected pleasure to have landed in our laps out of nowhere, and will prove to be the soundtrack to lazy summer afternoons and evenings. (8/10)