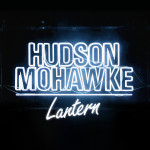 Since he released his debut album Butter in 2009, Glaswegian electronic wiz kid Hudson Mohawke (real name Ross Birchard) has become something of a producer-by-appointment to the hip-hop royalty of America. In the last five years, he’s accumulated credits on albums by Drake, Pusha T, Azealia Banks and Lil Wayne, and was named as Kanye West’s G.O.O.D. label’s in-house producer, all for his talent at infusing rap music with bold, bright electronic textures. In addition to all this, his infrequent work with Canadian producer Lunice under the name TNGHT made him a minor festival favourite. To say he’s been busy would be an understatement, but those closely paying attention to that scene believe that ‘Hud-Mo’ is unhappy with being tagged as the moshing jock’s DJ of choice and wants to relearn his art form. This is what we get with Lantern, a more restrained, considered and thoughtful approach with the intention of shaking off a reputation, to the point that it often spills over into difficult territory.

It seems odd that such commercial sounds can be heard on a Warp release, a label that has been home to Aphex Twin, Boards Of Canada and LFO. However, amid the garish, chart-friendly synths you can still hear the ‘laptronica’ glitches that were the label’s signature sound, but quite of a bit of this creativity feels like it’s there because Birchard feels it has to be, to prove a point, rather than offering anything to the music itself. The satisfactory ‘Very First Breath’, sets the tone for what he wants it to be – a study in what it means to be an electronic music curator in 2015 while still retaining a mass audience. Unfortunately, it falls between stools, such as on the confusing instrumental ‘Kettles’, whose orchestral swells are manipulated through technology to sound thin and weak. Antony Hegarty (i.e. of Antony & The Johnsons Mercury-winning fame of 2005) offers his beautiful voice to ‘Indian Steps’, a delicate song about not wanting to wake a lover while getting up in the morning, is drowned out despite the muffled timpani sounds. Of the highlights, ‘Portrait Of Luci’ sounds like Aphex’s drukqs if it was re-imagined by Kanye. ‘System’ is the only thing that truly sounds like a festival banger, with its time-stretched hi-hats and deep bass propulsion.

Birchard sometimes sounds as if he’s being deliberately difficult, like on the irritating ‘Lil Djembe’ or the deliberately distorted R&B of ‘Deepspace’, where Miguel’s guest vocals are rendered totally incoherent. But for every instance where Birchard overthinks things, he gets it right with an absolute beauty like ‘Shadows’, which updates the briefly popular “chiptune” idea for 2015. While occasionally fun and fascinating to listen to, Lantern ultimately sounds like what it is – an artist intent on reclaiming his identity, with all the inconsistency that usually comes with that territory. Too often, the listener is very aware that this is what is happening, and that painful process of self-rediscovery isn’t always enjoyable. It is also probably too short on bangers for quite a lot of his newer fans – something that Birchard probably isn’t too bothered about. However, they can cherry-pick Lantern for its highlights, which are just about sufficient. We can only hope that two things happen as a result of it: firstly, that we don’t have to wait until 2021 for his third album; and secondly, that Hud-Mo feels a bit more comfortable in his own skin as a result. If not, his creativity may be doomed to forever be in the service of others, not for himself. (5/10)