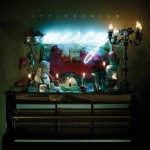 Active Child is the recording name of New Jersey electronic music artist Pat Grossi, who won plenty of plaudits for his first album You Are All I See in 2011. A porous mixture of electronica, post-dubstep and minimalist pop accentuated by Grossi’s harp-playing skills and his striking falsetto that was developed through a childhood spent in choirs, it was cited by many as an example of the future direction of electronic music in the 2010s, which influenced the likes of The Acid, M83 and FKA twigs. His song ‘Hanging On’ was covered by Ellie Goulding on her 2012 album Halcyon, giving him some further exposure. Fans of that debut were dissatisfied with the direction Grossi took with 2013’s Rapor EP – as if artists are supposed to stay the same way forever! – and are likely to feel the same about his sophomore full-length Mercy.

A pretty modest ten tracks spanning just 35 minutes, Mercy feels very much like a calculated attempt to refine his monastically minimal sound even further. Having helped forge the zeitgeist, Grossi wants to do something different with it. The soft, delicate arrangements are rendered with deep, echoing synth noises and sparse beat patterns, demonstrated very clearly on the low-key opener ‘1999’, a nostalgic paean whose sentiments are echoed throughout in the songs’ structures and overall feel. The title track and the retro ‘90s-R&B style of ‘Never Far Away’ underscore this sense that Grossi is trying to lose himself in the sounds of his formative years. The subdued guitar picking on ‘Darling’ sees him perform the same musical trick with an entirely different selection of instruments. When the deep, delicious house beat kicks in halfway through ‘Stranger’, it’s a brief return to You Are All I See and a highlight on an album that’s consistent and steady rather than brilliant.

When it works, it reminds the listener of the blissful reveries of Active Child’s former touring pals School Of Seven Bells. For a very vulnerable sound, Grossi’s music can certainly never be described as fragile or weak. However, the problem with Mercy is that it is all extremely polished and economically arranged, so much so that it can feel sterile on occasion. Some sense of rawness, of spontaneity, would help matters greatly. Furthermore, Grossi’s expressive vocals, while undoubtedly beautiful to hear, are often indecipherable and hard to understand, and on an album that puts such a high premium on emotion, this is very frustrating. In years to come, Mercy will probably come to be seen as a stepping stone on a journey from A to B. (6/10)