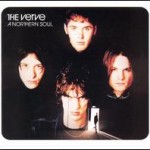 Front cover of ‘A Northern Soul’

While The Verve may be more famous for their hugely successful third album Urban Hymns (1997), its 1995 predecessor A Northern Soul deserves to be mentioned in the same breath. The sound that would bring them mainstream success two years later, a powerful brand of alternative rock with strong elements of prog and distortion – think Oasis and Spiritualized in equal parts – really began to take shape here. Their 1993 debut, A Storm In Heaven, although certainly worthy of attention, was a more overtly psychedelic experience, sounding very different to their subsequent output. Lead singer Richard Ashcroft’s charisma comes to the fore, his vocals having been turned down and obscured in the mixes of their previous work.

The change in sound was partly due to the more focussed production techniques of Owen Morris, who rejected the band’s previous method of constructing songs out of studio jams. Consequently, the swirling, heady prog rock atmosphere is intact, with Nick McCabe’s guitar and effects pedals at the front of the mix, but is now harnessed to a sense of urgency and purpose. This can be most clearly heard on the lead single ‘This Is Music’, Ashcroft’s pained and existential vocals acting as an anchor amid the storm of McCabe’s roaring guitar effects. When he sings “if love is a drug then I don’t need it” and “teenage tears sting my eyeballs / in a town where I wasn’t born”, he makes his anguish an act of self-affirmation and catharsis, and that’s what Ashcroft’s lyrics and qualities as a frontman derive from. To borrow Paul Morley’s quotation, he became to be seen as a kind of Celine Dion figure for teenage boys from wind-swept post-industrial towns.

However, The Verve also demonstrate on this album that you can address grand, existential and personal issues without resorting to sheer noise to deliver the message. ‘So It Goes’ and ‘Drive You Home’ are sprawling yet quiet and haunting. The psychedelic, bass-led wig-outs of ‘Stormy Clouds’ and ‘Life’s An Ocean’ are two standout tracks, even in what feels like an album of highlights. More conventional, acoustic guitar-led singles ‘On Your Own’ and ‘History’, the latter propelled by tremendous string intro and whose opening lyrics are adapted from William Blake’s poem ‘London’, are the clearest pointers towards the anthemic majesty of Urban Hymns.

Easily the equal of its more famous successor, it is an essential listen for the heartbroken and frustrated young male psyche. Ashcroft admitted recently that the detectable sense of turmoil and heartache was actually attributable to a recent split with his girlfriend. “I hear this character all the way through the record; pretty pained, then elated, then arrogant,” he says about the narrative arc of the record, but his talent was translating these personal experiences into universally relatable ones, without which the album wouldn’t be considered the classic that it is twenty years later. A Northern Soul is infused with a peculiar sense of time, place and experience: what it’s like to be young in a dead-end, English satellite town. It remains a breathtaking achievement – as the NME puts it, “a time when the drugs did work”.

Listen to A Northern Soul here!