REVIEW: Gengahr – ‘A Dream Outside’ (Transgressive) 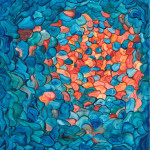 Front cover of ‘A Dream Outside’

Shelved alongside the likes of Tame Impala and Unknown Mortal Orchestra, London-based Gengahr have been one of the main critic’s choices for bands to watch in 2015. Following on from their brilliant set at Live At Leeds, their full-length debut A Dream Outside is a melting pot of summery, psychedelic pop hooks. On first listen it might float by without any immediate impact – after all, the air of ‘90s revivalism is something being channelled by quite a lot of new British groups at the moment – but dig a little deeper and you’ll find some fantastic melodies and layered guitar work that make it worthy of repeated spins.

The distinctive voice of Felix Bushe is a cross between Orlando Weeks from The Maccabees and Unknown Mortal Orchestra’s Ruban Neilson; it’s something of a high-pitched wisp and it’s pretty infectious. Stand-out tracks including ‘Heroine’, ‘Fill My Gums With Blood’ and ‘Loney As A Shark’ are perfect psychedelic tracks which maintain a pop sensibility. The band blends together fairy-tale narratives with an eye for the fantastical. Lyrically they cover phantoms, heroes, villains, witches and ghosts.  These themes are perfectly balanced with an arsenal of technical ability.

‘She’s A Witch’ is a four-to-the-floor style edgy pop hit, with a hint of darkness underneath the surface. It’s a stylistic combination between MGMT and a dose of Graham Coxon on guitar. ‘Heroine’ gives a slight nod to Feeder’s 2001 hit ‘Just A Day’ too – an impressive bass guitar riffs followed by a layering of intricate hooks. ‘Powder’ heads into the baggy sound of early Stone Roses, whilst still maintaining a floaty, hypnotic sound.

‘Dark Star’ and ‘Embers’ are the only “filler” tracks on the record, to the extent that they don’t grab your attention immediately, but it doesn’t distract from Gengahr’s obvious melodic talent. These two tracks are a little more spatial than the rest and the keys section probably makes it one of their most experimental on the record. For a debut, A Dream Outside is a stand-out effort, an increasingly rare instance of a British guitar band with confidence but great songs to back it up. The quiet/loud dynamic plays a huge factor in the success of the album and it looks a bright future for Gengahr. (8/10)

Listen to A Dream Outside here!