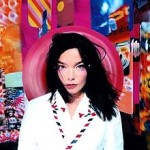 When we talk about classic albums and great artists on this site, we often talk about their ‘imperial phase’: that period during their career where everything they touch turns to gold, the critics and fans are united in adoration, and the material remembered and revered years down the line. Often, that period only seems golden with the benefit of hindsight, when the artist in question isn’t producing work of the same quality any more. But when it comes to Björk, one could argue that her entire thirty year career has been one long imperial phase. Seriously, when has she ever made a bad album? Come to that, when has she ever made an album that’s anything less than very good? Even stretching back into the ‘80s and her work with The Sugarcubes, all her music has been characterised by a bold experimental bent, for the most part anchored in a pop sensibility, and hallmarked with her distinctive and haunting voice. There’s always been something magical about her music, that separates it from the space and time continuum of pop music yet has consistently managed to stay several steps ahead of the game.

Post, Björk’s second album, is a fascinating document of her evolution. It transposed the pop magic of her 1993 Debut album onto the kind of high-yield experimentation with which we now associate her. It’s an almost-complete move from the brilliance of her first album to the flawless, gleaming Homogenic in 1998, like seeing a 95% completed skyscraper that still has the scaffolding around it. The fact that you can still see the seams and the method of its construction makes it all the more fascinating. As well as retaining Nellee Hooper from Debut, Björk added the crème-de-la-crème of the mid-‘90s electronic producers to bring Post to life, including trip-hop visionary Tricky, rising star Howie B and 808 State’s Graham Massey. What we get is an album of cutting edge sonics and strange, sudden contrasts from track to track that create a consistently unsettling mood.

Not least because of the presence of ‘It’s Oh So Quiet’, a faithful cover of a big band B-side from the 1940s that unexpectedly became her biggest UK hit (#4 in December ’95), which sticks out like a sore thumb. That song’s joyousness derives from that sense of not belonging in an album like Post, but somehow, it makes sense in the context of the record’s avant-garde unpredictability. How cheeky to put something so ludicrously out of place in a collection like this – but, like the flippant inclusion of ‘Yellow Submarine’ on The Beatles’ Revolver, that’s exactly the point, and that feeling infects the rest of Post.

The assertive, moody opener ‘Army Of Me’, also the album’s lead single (UK #10), immediately signalled the end of the pop-pixie version of Björk we saw on Debut. With its booming, marching drum pattern, it’s in many ways the straightest song on an album of shifting narrative voices and evasive music. An additional five UK Top 40 singles were squeezed from Post – ‘Isobel’ (#23), ‘It’s Oh So Quiet’ (#4), ‘Hyperballad’ (#8), ‘Possibly Maybe’ (#13), ‘I Miss You’ (#36) – the last of which was released in February 1997, a full 20 months after the album’s release. For such a strange album to yield so many hit singles is highly unusual, but such was the intent of her indie label One Little Indian to cash in with a global superstar on their hands.

After ‘Army Of Me’ comes the beautiful ‘Hyperballad’, a soft song that could hardly be more different, which builds from a sensual start of brushed, feather-light drums to a deep house climax. The strange syntax of surreal lyrics like “when I land will my eyes be closed or open” and “irritating noises of dinosaurs” adding to the wondrous cocoon that Björk and her producers spin. Upon such stark contrasts is Post built. The creeping, electronic shrouds that envelope ‘The Modern Things’ and the spooky album closer ‘Headphones’ sit adjacent to the exuberant carnival trumpets and drum beats of ‘I Miss You’.

The epic centrepiece ‘Isobel’ is a joyous flight of fantasy, part of a narrative trilogy about a single character that is bookended by Debut’s ‘Human Behaviour and Homogenic’s ‘Bachelorette’. ‘Isobel’s deepest feelings are stirred by some inner force previously unknown to her: “in a heart full of dust / lives a creature called lust / it surprises and scares” – portraying an unknowable, hermetically sealed character and a cipher for its author’s own carefully guarded private life. That song is followed by the much more vulnerable ‘Possibly Maybe’, a delicate spider web of electronic tingles and ambience. ‘Enjoy’ is as stark a contrast as possible to ‘It’s Oh So Quiet’, a brooding trip-hop number that cleverly doesn’t let a then-brand new sound overwhelm it in any way, next to what can only be described as a guilty pleasure. The minimalist vignettes of ‘You’ve Been Flirting Again’ and the Eastern scales of ‘Cover Me’ are there purely to give the listener some space to gather their thoughts, but are atmospheric enough to retain your attention.

The lasting quality of Post is its eclectic, random state of not quite knowing what it wants to be, a snapshot of Björk in a period of transition, heading towards a shimmering, gleaming future for pop music that was a decade ahead of its time. It’s no coincidence that Pitchfork named Post and its successor Homogenic right next to each other in its list of the Top 100 Albums of the 2000s (at #20 and #21 respectively) as they may as well be twins. Listen to The Knife, Robyn, Joanna Newsom or Goldfrapp and you can hear a reverberation of the impact that Björk made for female vocalists within the pop genre as it evolved rapidly throughout the noughties. Sonically, it proved fertile ground for the imagination of others, as evidenced by its companion remix album Telegram. For our money, Post is a highly interesting work which, for some, will rank as her best, and others not. Björk has worn many different disguises in pursuit of her art, all of them believable and true to her persona: but like David Bowie’s Station To Station, this is a rare instance of an artist briefly letting the mask slip to reveal a fleeting glimpse of their true identity, a one-off portrait, never to be repeated.