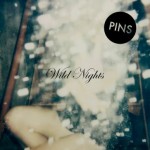 Manchester’s all-female quartet PINS made one of the better British guitar debuts of 2013 with Girls Like Us, a solid if unspectacular study in post-punk revivalism in which they demonstrated a thorough understanding of the dynamics of the genre. While it didn’t really add anything to the canon, it indicated great promise for the future. More impressive was their prodigious work ethic, relentless touring and the curation of their own record label HAUS OF PINS. For their sophomore effort, they’ve ditched rainy Manchester for the sun-scorched Joshua Tree studio Rancho De La Luna, hoping presumably to inject their music with some different musical inspirations. As they would have hoped, Wild Nights offers a little more colour and vibrancy than the monochrome inner-city soundscapes and empty spaces of their debut. While it constitutes another enjoyable run-through of the post-punk shape-throwing manual, it still suffers from the same ‘nearly-but-not-quite’ problem as their debut.

Hints of the peyote-spiked drone rock of Loop and Wooden Shjips have seeped into a number of tracks, and this provides the main difference to their debut. Vocalist Faith Holgate spoke of the band’s affection for My Bloody Valentine and The Jesus & Mary Chain two years ago, and this change evidences that influence for the first time. We hear this most prominently on the bluesy Spiritualized-influenced ‘Got It Bad’ and the moody opener ‘Baby Bhangs’. The youthful assertiveness and idealism of their debut hasn’t worn off – on ‘Young Girls’ Holgate yearns “we want to get away from here / we’re not trying to be brave”. ‘Curse These Dreams’ features an almighty post-punk chassis of Sophie Galpin’s hypnotic drums and Lois McDonald’s sonorous electric guitars; and the slick fem-rock of ‘Molly’, a song about being totally enraptured with a new friend who’s egging you on to stay out, is another sharp moment. Elsewhere, PINS channel the mid ‘80s, British indie of the C86 / Postcard bands on ‘Dazed By You’ and single ‘Too Little Too Late’, both thrilling and managing to achieve an odd balance between charm and menace. Proceedings end with the funereal ‘Everyone Says’, a sumptuous and expansive way to sign off an enjoyable experience.

We pointed out with Girls Like Us that, however derivative the building blocks of this sound are, at least PINS seem to understand the thrills and appeal of this sub-genre that’s been so exhaustively mined over the last decade, unlike many bland revivalists who rely too much on volume. PINS’ girl-gang, ‘us v them’ poses may be pretty studied, but they lay on a decent spread, encompassing ‘60s girl-band pop, garage rock, drone rock, shoegaze and C86 indie-pop, and sound like they’re having great fun doing it. A couple of phoned-in moments in the form of ‘House Of Love’ and ‘Oh Lord’ will be picked up by critics as betraying a lack of originality, to which we say: if you want to be sniffy about it, fine, but you’re missing out on a great time. While Wild Nights is totally enjoyable on its own terms, it’s nothing more than a decent follow-up to a promising debut, and there’s a still a little something missing in terms of invention that would yield PINS a classic album. (7/10)