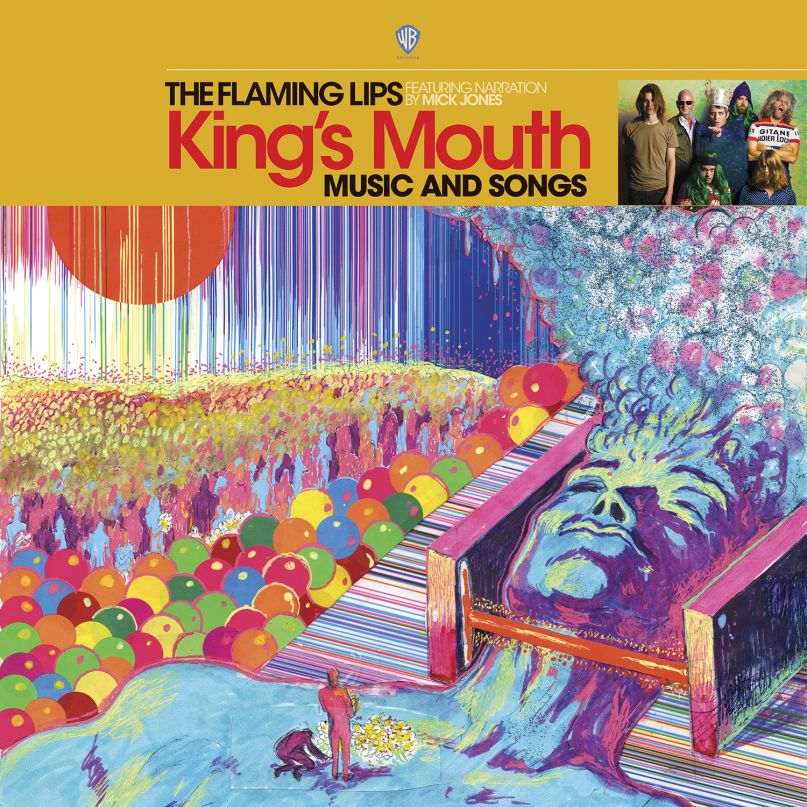 A concept album revolving around a giant baby ruling a city, ‘King’s Mouth’ represents another good access point to the weird and wonderful world of The Flaming Lips.

Since their inception in 1983 up to the release of 2019’s King’s Mouth, The Flaming Lips have rightly earned their reputation as one of rock music’s quirkiest and most innovative outfits. Because they have dipped their toes into so many sub-genres of pop and rock for over 35 years – including dream-pop, psychedelic rock, acid rock, art rock, alternative rock and sometimes even bordering on avant-garde – they have rendered themselves unclassifiable. Not only have The Flaming Lips been changing their music for their dedicated fanbase, but they even went so far as to attempt to change the way that listeners consume it, with the release of 1997’s wildly impractical Zaireeka which contained four CDs that needed to be played simultaneously.

It wasn’t until Wayne Coyne and co. signed to Warner and recorded 1992’s Hit To Death In The Future Head that they began showing indications of possible mainstream success. The closest they had come previously was with Telepathic Surgery and tracks like ‘Drug Machine In Heaven’ and ‘Chrome Plated Suicide’, showcasing their early lo-fi, edgy, acid-drenched guitar production. But it wouldn’t be until the weird novelty single ‘She Don’t Use Jelly’ from Transmissions From The Satellite Heart that heads started properly turning. But as everyone knows, first exposure to The Flaming Lips usually occurs through the critically acclaimed and highly accessible albums The Soft Bulletin and Yoshimi Battles The Pink Robots. The band won the Grammy for Best Rock Instrumental Performance in 2003 with the closing track of the latter ‘Approaching Pavonis Mons By Balloon (Utopia Planitia)’ and would do so again with ‘The Wizard Turns On…’ from At War With The Mystics in 2007.

Just in the last decade or so, however, The Flaming Lips have involved themselves in a plethora of projects outside of three studio album releases (Embryonic, The Terror and Oczy Mlody). They joined forces with pop megastar Miley Cyrus on her 2015 album Miley Cyrus & Her Dead Petz and she, in turn, featured as a guest vocalist on a few occasions, including on the closing track of Oczy Mlody ‘We A Family’. If that wasn’t enough, they also released a 2012 collaboration album with various artists titled The Flaming Lips and Heavy Fwends and recorded cover albums curating and reimagining essential records, such as Dark Side Of The Moon, The Stone Roses and Sgt. Pepper’s….

Now we come to their 15th studio release King’s Mouth, which was released as an exclusive limited-edition vinyl earlier in 2019 for Record Store Day. In typical Coyne fashion, the narrative is bizarre but, in some way, metaphorical to life, mortality and the inevitability of death (i.e. usual topics that The Flaming Lips have previously covered in their discography). The story is superbly told by none other than former Clash guitarist Mick Jones. What started out as a soundtrack for one of Coyne’s art exhibits is now a full-length Lips album that opens with ‘We Don’t Know How And We Don’t Know Why’ where a queen mother has died in labour and given birth to a giant baby boy who is to be king of the city. The trumpet-sounding organs exert a melancholic and saddening atmosphere. We then hear Coyne’s expressive vocals on ‘The Sparrow’ with dense and compressed basslines in the backdrop, the likes of which haven’t been heard since the Lips’ commercial heyday nearly 20 years ago.

‘Giant Baby’ is where we first hear Jones’ narration with “The giant newborn grew into a giant little boy / It wasn’t easy to find him giant baby toys / He loved outer space and he loved the sky / He would reach up to touch it, but it was too high”. It is apparent that King’s Mouth is one of The Lips’ more accessible records since Yoshimi Battles The Pink Robots. But unlike Yoshimi…, the story runs through the entire tracklisting. Where the previous three records were more ambient and challenging to listen to, the instrumentation of King’s Mouth recalls The Lips as they were in the late Nineties/early Noughties. While acoustic guitars may dominate ‘Giant Baby’ and ‘How Many Times’, enthralling ambience imbibes ‘Electric Fire’ that progressively gets grander and louder. Here, it is discovered that the new-born King’s giant head and mind holds “Outer Space”, “Aurora Borealis”, “great thunderstorms” and “all associated regions”.

Disaster then strikes in the second half of the album when an avalanche threatens the lives of the King’s citizens (“One day the snow got too heavy / Rolling down to the city below / The mountain and sky couldn’t hold it”). Using his giant mouth, presumably, the King sacrifices himself to save the city by swallowing the avalanche and more components that make up the universe. But “even in death, the king still seemed to be alive” on the penultimate track ‘Mouth Of The King’. By this time the citizens had severed the King’s head from his body and dipped it in steel, as visualised by the album cover. The tracks that tell this portion of the story, including ‘Feedaloodum Beetle Dot’, ‘Funeral Parade’ and ‘Dipped In Steel’, make use of synthesized vocal harmonies and bell rings to build a despondent aura.

So, what is to be said about The Flaming Lips’ latest effort? Well, the production and instrumentation are lush, beautiful and wholesome. The narrative is mournful but charming at the same time and displays Coyne’s creative genius very well. However, King’s Mouth doesn’t quite hold up as one of their strongest albums. While the rather short runtime, by Flaming Lips standards, is not a problem in and of itself, this narrative could’ve been expanded upon in more detail without hindering the flow of the album. Nevertheless, this album does hold significance in a different way. Before, only The Soft Bulletin and Yoshimi… acted as the entry points for new listeners. Now, King’s Mouth has joined their ranks in terms of accessibility. (7/10) (Harry Beynon)

Listen to King’s Mouth by The Flaming Lips here via Spotify, and tell us what you think below!