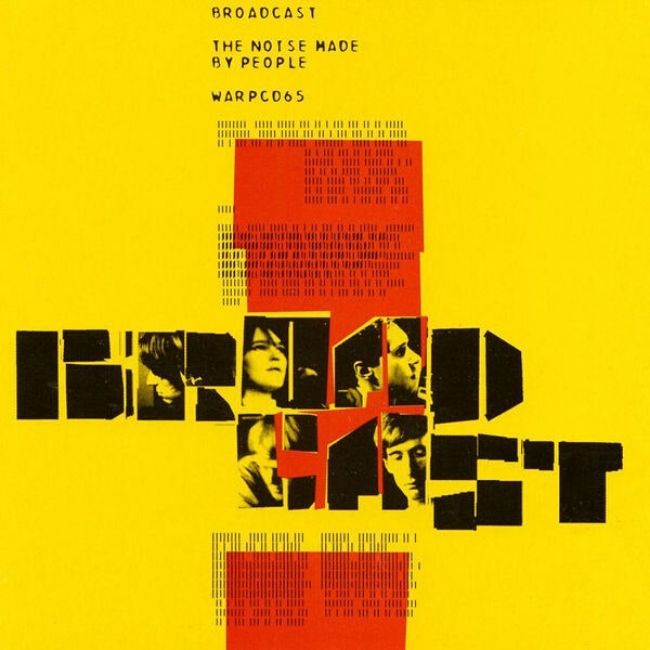 Far from fulfilling 20th century pop culture’s visions of what the turn of the millennium might be like in musical and cultural terms, the year 2000 was rather a damp squib for British music. It was a period when ‘alternative’ guitar music was still experiencing a hangover from Britpop, with rather staid and conservative albums like Travis’ The Man Who and David Gray’s White Ladder still selling in the hundreds of thousands. It saw bands like Coldplay and Toploader emerge, and the back-to-basics garage-rock retro-revolution spearheaded by The Strokes was still a year away. Having been an avid chart follower and music fan at the time, the sensation was rather like the past having died and the future not yet born, looking back at it. But there was still fertility in Britain’s alternative music scene and going on outside the world of the charts and ‘Top of the Pops’, exemplified by The Noise Made By People, the long-awaited debut album by Broadcast.

Sharing a sense of nostalgia for yesterday’s visions of the future as bands such as Stereolab and United States Of America, The Noise Made By People is a fantastical other-world, a sonic patchwork of creaking, vintage synths, dusty sci-fi soundtracks inspired by the output of the BBC’s Radiophonic Workshop, haunted vocals and splashy rhythms influenced by jazz and krautrock. Formed in Birmingham in 1995 by lead singer Trish Keenan and instrumentalist James Cargill, their debut album was the result of an expensive two-year production process that took in three different producers to find a satisfactory sound. It had followed the 1997 compilation Work And Non Work, gathering up the band’s earliest singles and The Book Lovers EP which had stoked up such anticipation in small circles of music fans looking for an alternative to Britpop.

At first, these dozen songs feel quite inhospitable and wintry, characterised by ghostly chimes, gently distorted and fuzzed-out analogue effects and echoing instrumentation. The spectral ‘Until Then’ and the haunted waltz of ‘Look Outside’ are exercises in crystalline perfection, easy to admire but a bit difficult to love at first, for instance. But after a few listens, these soundscapes become warm and inviting, and become a space to lose yourself in. The loungey, jazzy tempos of ‘Unchanging Window’ and ‘City In Progress’ are dreamy; the instrumental ‘Tower Of Our Tuning’ is detached and clinical; the two tracks that bookend the record, ‘Long Was The Year’ and ‘Dead The Long Year’, are both richly layered compositions with industrial influences and rippling, grooving riffs. On ‘Echo’s Answer’, Keenan and Cargill fuse medieval and modern aesthetics.

It’s Trish Keenan’s spellbinding vocals that provide the constant elements that threads The Noise Made By People together. Her singing style sounds like a more detached take on that of Sixties chanteuses, but more like Sandie Shaw and less like Nico, but there’s a generous and human quality to her delivery that can sound reassuring and calming on stand-out single ‘Come On Let’s Go’, beckoning you to follow her amid a collage of harpsichords and vintage synths (“you won’t find it by yourself, you’re gonna need some help / and you won’t fail with me around, come on, let’s go”). She’s also capable of sounding catty and stern, amid the decayed keyboards of ‘Paper Cuts’, for instance, as she admonishes an errant lover. As the music unspools, modulates and shifts, Keenan is a companion to take you by the hand, and makes the whole experience more human than the space-age nostalgia trip that it might otherwise have been.

In the context of a music industry that has rarely been as unadventurous despite still coining it in at the height of the CD age – this album’s release on the normally electronic-orientated Warp Records speaks volumes about that label’s eclecticism and the un-adventurousness of the rest of the industry – The Noise Made By People was at the cutting edge in 2000, paradoxically pointing a way forwards despite its entire ethos being one of retro-futurism. It was equally in love with Californian, hippie-based Sixties ideals regarding what the future might look like as it was with the more dystopian visions of George Orwell or Stanley Kubrick, which had root in a more English tradition.

Following the release of their debut and the warm reception given to it – its omission from 2000’s Mercury Music Prize shortlist was nothing short of outrageous, especially considering the bland Badly Drawn Boy ended up winning it – Broadcast became more confident and songwriterly in successive albums, but were met with diminishing commercial rewards. 2003’s bewitching, dizzying Haha Sound found a small audience in the States but underperformed in Britain, and 2005’s Tender Buttons represented their boldest album to date. A collaboration album with Focus Group then appeared in 2009, but Keenan’s sudden death in January 2011, from pneumonia shortly after contracting swine flu on a tour of Australia, effectively brought Broadcast to an end.

However, Broadcast’s influence, and that of their spectacular debut album, lives on in a number of artists who emphasise texture, complexity and subtlety over immediate gratification. Sounds as varied as The Knife’s minimalist electronic pop to Kevin Parker’s retro-futurist visions for guitar music owe a small but significant debt to people like Keenan and Cargill, who would have achieved a much greater fanbase if they were operating now, or even just a few years later – and if you’re a fan of these bands, you’ll definitely love The Noise Made By People too and hold it close to your heart.

Listen to The Noise Made By People by Broadcast here via Spotify, and tell us what you think below!