A Beginner’s Guide to Stereolab 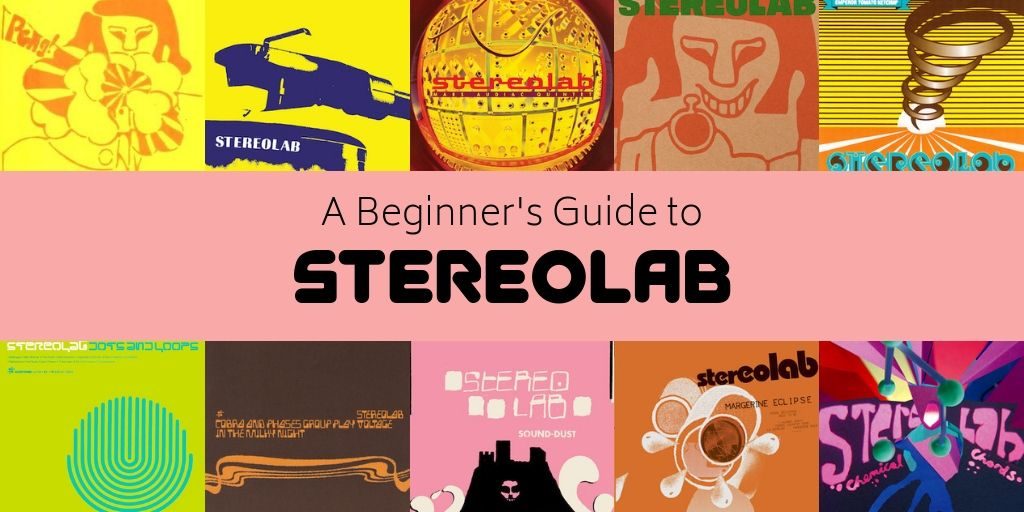 As the Nineties indie scene begins to be re-appraised with more diversity and depth than it’s usually explored, groups like Stereolab are gradually coming to the fore and being re-discovered and enjoyed in greater numbers. And a very good thing this is too – the decade was rich with oddities, curios and under-appreciated talent in the post-Nirvana and Oasis goldrushes on either side of the Atlantic. Currently in the middle of a reunion tour of Britain and Europe this summer, and with their prime body of studio albums undergoing the deluxe re-issue treatment, this is an introduction to one of the most idiosyncratic groups of that decade – and one that simply couldn’t have come from any other time or place.

Formed in 1990 by English guitarist Tim Gane and French vocalist/multi-instrumentalist Laetitia Sadier in the aftermath of the dissolution of the former’s stridently left-wing cult indie band McCarthy at the turn of the decade, Stereolab were the product of a pretty unique set of cultural conditions that, even then, were in the process of vanishing. At the end of Thatcherism/Reaganism and the end of the Cold War, it was still possible for bands espousing radical politics, or even just using anti-mainstream vernacular either with lyrics or their instruments in a DIY fashion, to survive on social security, in a way that’s simply unimaginable now. The mid- to late-Eighties and early Nineties were a fertile time for the underground, as evidenced by the welter of compilation albums from various micro-genres or splinter scenes that have been appearing over the last five years or so – basically, see every Cherry Red box set since 2013!

Anyway, we digress, but the context in which Stereolab emerged is vital to understand. Together with the mercurial guitarist Mary Hansen, who joined in 1992 and played on all of their magnificent run of studio albums until her untimely death in 2002 in a road accident, the creative and romantic relationship of Gane and Sadier, along with a rotating cast of supporting musicians, crafted some of the strangest and most under-appreciated music of the Nineties.

Whereas McCarthy were insular and straightforward, a product of the C86 era, Stereolab were an ambiguous melting pot of sonic, cultural and political influences. Releasing a string of engrossing albums of skewed, repetitive noise-pop and surrealistic lyrics delivered with an aloof, retro cool and an unabashed intellectualism that was often misunderstood in the unsubtle, raw expressiveness of the Nineties, they stood in proud contrast to the predominance of Britpop and major label-backed alternative rock. Some called it ‘avant-pop’, others dubbed it ‘post-rock’; journalists variously described it as futuristic and throwback, but nobody could agree on exactly how to pigeonhole this most ingeniously undefinable of bands.

Naming themselves after an experimental subdivision imprint of Vanguard Records said it all, really. Stereolab’s sound was one derived in equal measure from classic Sixties pop and Mod influences, in a similar way to the bricolage approach of Saint Etienne, but also from a wealth of knowledge about surrealism and esoterica, from funk, jazz, lounge, tropicalia and other genres from around the globe as well as the likes of art, cinema and literature. For example, many pieces of their early artwork were cribbed from an obscure cartoon titled “der tödliche finger”, which appeared in a 1970 issue of a Swiss underground newspaper. They were also much more experimental and odd than the drone-rock aspects of their sound would suggest, as they were unafraid of bringing out pop melodies when needed, even if they were playing their music mainly on vintage instruments and synthesisers. Crowning it all, Laetitia Sadier’s dreamy, almost absent-minded vocal delivery was the perfect method of communication for Stereolab’s aesthetic.

Although they were certainly broadly left-wing in their politics, their lyrics were not really penetrable from any political or philosophical critiquing, with Sadier and Gane choosing obliqueness over directness. While they were often criticised as difficult at the time – the NME infamously gave their 1999 album Cobra And Phases Group Play Voltage In The Milky Night a 0/10 mark – this approach avoided the pitfalls of making their aesthetic sound dated with the passage of time, and their music now has a timeless quality.

You can hear, right from their 1992 debut album Peng!, that Stereolab’s vision was very firmly established from the beginning. But through their masterpiece mid-Nineties records – 1994’s adventure playground-esque Mars Audiac Quintet, 1996’s chart-penetrating commercial highpoint Emperor Tomato Ketchup and 1997’s stylised Dots And Loops – they successfully added elements to their sound without ever risking diluting it. That growth was simultaneously documented in the wonderful Switched On compilations that rounded up their non-album singles and EP work. They also established their own record label, Duophonic, with their manager Martin Pike, and collaborated heavily with other groups, most notably Tortoise and Mouse On Mars.

Although they soldiered on for eight more years after Hansen’s death following 2001’s Sound-Dust, in truth their sound was never quite the same afterwards, combined with the demise of Gane and Sadier’s own romantic relationship the same year. 2008’s Chemical Chords was their last recording activity (though the same sessions did yield another LP in Not Music two years ago) after which Stereolab went into hibernation.

In early 2019, however, Gane and Sadier announced that they would be reuniting for a tour of Europe and the United States, to plug a re-issue series of their albums on Warp Records. That tour hits the United Kingdom in mid-June, and the shows are set to be emotional journeys through their byzantine and brilliant catalogue.

Please check out our Beginner’s Guide to Stereolab playlist over at Spotify, or by scrolling below – happy listening!