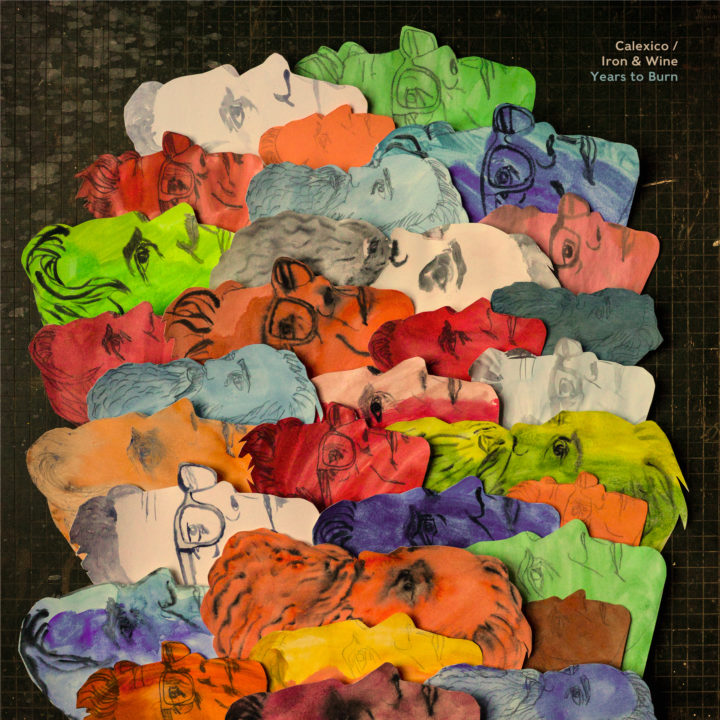 14 years on from their last collaboration, Calexico and Sam Beam once again demonstrate their creative affinity for each other on ‘Years To Burn’.

It has been 14 years since South Carolina singer/songwriter Sam Beam (better known by the moniker Iron & Wine) and Arizona-based indie rock outfit Calexico last worked on a project together. Back in 2005, they recorded a seven-track EP titled In The Reins which was a beautiful combination of country, folk, indie and jazz. Both artists have always been introducing stylistic changes to their music, but have ultimately kept hold of a central identity and have only ever strayed off course to necessary degrees. For example, the difference in aesthetic between Calexico’s 1998 sophomore album The Black Light and 2006’s Garden Ruin, or even last year’s effort The Thread That Keeps Us, is quite striking yet are also obviously cut from the same cloth. Likewise, Iron & Wine’s 2002 lo-fi debut The Creek Drank The Cradle sounds very different to 2011’s Kiss Each Other Clean, where even faint whiffs of funk can be detected, but the latter is recognisably part of an evolutionary process that stems from the former.

With the release of Years To Burn, it can be confirmed that there is a noticeable genre overlap between the two artists, hence why In The Reins was such a coherent affair along with this new album. Songs like the angelic opener ‘What Heaven’s Left’ and ‘Follow The Water’ predominantly consist of acoustic guitar chords and melodies, some twists and turns appear along the way. The almost two-minute interlude ‘Outside El Paso’ is an ambient track mostly upheld by snippets of atonal brass that crop up haphazardly. But whether it is a complementary addition to the album’s tracklisting is a dubious matter. The bouncy acoustic melody on ‘Midnight Sun’ is an instant hook and progresses into a short-and-sweet electric guitar solo.

The album’s title implies a simple theme of life, memories and reminiscing. The closer ‘In Your Own Time’ paints a calm picture of a family sitting by a campfire: “Come meet the family and sit by the fire / Someone will catch you if you want to fall”. This track also highlights the soothing nature of the vocalists’ American intonation which makes Years To Burn’s listening experience accessible to newcomers. The penultimate title track sounds like something Sparklehorse, and maybe even Spiritualized, might have released. The guitar, drums and piano all create this slow tempo and morose atmosphere.

The eight-minute centrepiece of Years To Burn is ‘The Bitter Suite’, split into three parts. The first, ‘Pájaro’, opens with what sounds like a Mexican-inspired guitar passage before the vocalists start singing in a foreign language, presumably Mexican. This is not surprising, however, as Calexico are known to have been inspired by Tex-Mex and Latin music. Following on from this, ‘Evil Eye’ is an instrumental part of the track where more brass instrumentation occurs but is led by a heavier and more engrained acoustic riff. The final segment, ‘Tennessee Train’, is a lovely but despondent outro sung by Beam who mentions his parents in the song with “My first mom left like she never had / Dug her heel deep into the mountainside” and “My last dad was clean as he could ever be”. Each verse concludes with the divine refrain “Trains leave Tennessee / Mourning as they roll away”, perhaps a metaphor for all those who have left Beam’s life, but the song’s title suggests that he is enriched by the arrival of new people.

The only complaint one could have for this album is the desire for more music to fully express Iron & Wine and Calexico’s captivating songwriting duality. It’s only one track and around four minutes longer than In The Reins was, and that was touted as a mini-album. Nevertheless, Years To Burn may be on the short side timewise, but the clear-cut tracklisting and captivating artistic alchemy they create together more than makes up for it. (7/10) (Harry Beynon)

Listen to Years To Burn by Calexico / Iron & Wine here via Spotify, and tell us what you think below!