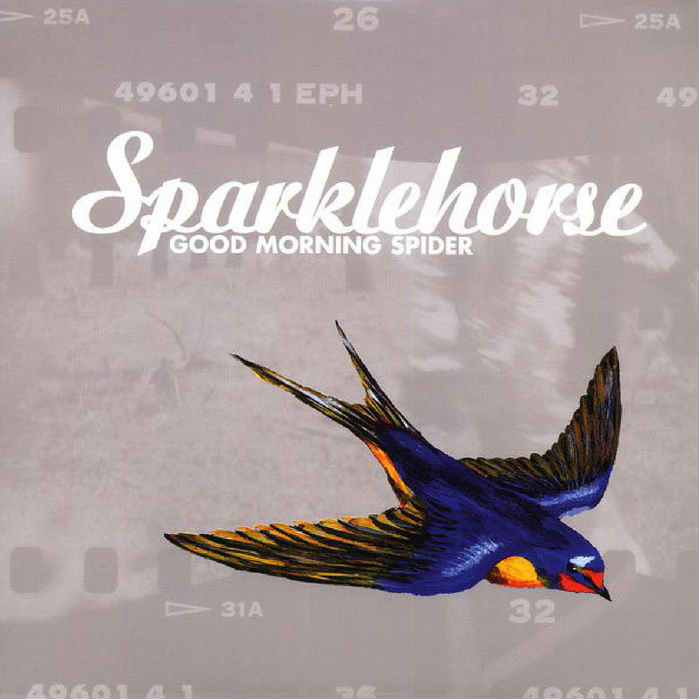 Of all of the underrated music of the Nineties, the dream-like, neo-Gothic alienation of Mark Linkous and Sparklehorse has to be some of the most consistently overlooked material the decade produced. Only making a small handful of albums before he committed suicide in March 2010, Linkous’ life was disrupted by sadness, battles with personal demons and no small amount of extreme misfortune. However, he managed to channel his feelings and observations about what was happening to him into music that burned with an incredible brightness and emotional intensity. Not in any overly dramatic or forceful way, but with an execution that struck the attentive listener innocuously but with an unmistakable sense of wonder at the world, the people and objects that populate it, and the processes that make them function within it.

While all four Sparklehorse albums are highly regarded and subtly different from each other, many fans and music critics regard 1998’s sophomore effort Good Morning Spider as the most complete statement of Mark Linkous’ life, 20 years on and eight after his death. Not simply for the tragic nature of the circumstances of its creation, but also because of how consistently well it expresses the various conflicting strands of the band’s music.

The context for the creation of Good Morning Spider constitutes one of the most tragic stories in pop music. After achieved a small amount of success with his previous bands Dancing Hoods and Salt Chunk Mary, Linkous released his first Sparklehorse album, Vivadixiesubmarinetransmissionplot, in 1995 on major label Capitol to critical acclaim. A prestigious slot supporting Radiohead on their European tour followed, but Linkous was indulging in alcohol and substance abuse, partly to combat his life-long depression and an inability to sleep while on the road. He overdosed in a London hotel-room bathroom with his legs pinned underneath him, cutting off the blood circulation for over 14 hours until he was discovered. When paramedics attempted to straighten his legs, the build-up and release of potassium caused Linkous to go into cardiac arrest, and he was reportedly dead for three minutes before he was revived.

A series of painful surgeries and a 12-week convalescence in St Mary’s hospital followed, as Linkous taught himself how to play guitar again and write songs, fearing brain damage from being unconscious for so long. Even then, Linkous bravely fulfilled a number of live dates in 1997 with the help of a wheelchair, before he was fitted with leg braces and slowly re-learned how to walk. Family members noticed that, after this near-fatal experience, Linkous’ bouts of depression became more serious and prolonged, but he also claims to have become more aware of other things in life. “It made me notice a lot more,” he told a 1998 documentary film. “It made me be a little more perceptive to small things, more, after that, I think. You know? People, babies, animals, insects. Things like that.”

Determined to carry on in the face of what had happened, Linkous and his wife Teresa set up a home-made 16-track studio in a rented, run-down house outside Richmond in his native Virginia. Assembling his kit with the help of thrift stores and discarded, arcane equipment from landfill sites, he set about making his return to recording by taking control of as much as possible. His methods show that he treated music with utter reverence, yet was not afraid to apply his own methods and do things his own way.

“I have a lot of cheap, little keyboards and this optigan thing and this synth module that has a zillion different sounds in it,” he told an interviewer in 1999. “I have a little Casio SK-1 that has a built in sampler. My favourite microphone I found at the landfill. It was on a CB base station. I’ve got these wireless intercoms from the ’50s from an auction from a dentist’s office.”

Linkous regarded himself as a vessel for creativity that often felt wasn’t actually his, as if he was merely channelling some exigent force that had arbitrarily selected him, that it wasn’t coming from within himself at all. It makes a refreshing change not to have to think of Linkous in that vaguely irritating ‘tortured genius’ paradigm that the rock press has traditionally used to portray male (but usually not female) songwriters tackling sad subject matter. “My songs? I don’t feel like they’re even mine,” he modestly said in the 1998 documentary. “I’m just a conductor.”

As a result of all his experiences and the unique methodology he applied to the recording process, the sounds of Good Morning Spider reinforce its themes – of frustration, resignation and depression, yet also of profound wonder and thankfulness – all of which came from the stew of emotions Linkous felt as he lay recovering in hospital for three months. Those things had been present in Sparklehorse’s first album, but somehow the context lent everything an extra dimension of meaning, of autobiographical poignancy, this time around.

The emotion of Sparklehorse’s music is not, and never has been, obvious. It is never forced down your throat by obvious rock theatrics and histrionics, no self-pitying dramatics in the vocal delivery, no obvious signposts to what you should be feeling at any given time. Rather, it seems intuitive, as if you are feeling it concurrently with Linkous. This is reinforced by his singing style, delivering his tremulous, creaking and vulnerable vocals close enough to the mic so that you can almost hear him swallowing and his tongue hitting his teeth as he sings. It feels as if Linkous is imparting a secret to you alone. Truly, this was music to find comfort and solace in, and it’s little wonder that Sparklehorse’s music has had such a huge impact on generations of bedroom artists.

Adopting a title referring to the old wives’ tale that seeing a spider in the morning was an omen for an unlucky day, the album’s sound is drawn sparsely from a wide range of influences. Spindly drum loops, ambient, bubbling synth textures and a range of guitar sounds inspired by both lo-fi and hi-fi indie dominate the record, interspersed with occasional sketch-like interludes and splenetic bursts of self-loathing set to excoriating lo-fi-punk. It’s coarse, yet smooth and very accessible at the same time, and this paradox echoes throughout the mood of Good Morning Spider in general – the subject matter operates in the grey middle areas of human states – between waking and sleeping, darkness and innocence, good and evil, even life and death. These feelings are so well essayed and described by Linkous that big universal concepts and struggles are fleshed out into almost physical characters.

The raw opener ‘Pig’, which sees Linkous rail against his body’s limitations, feels like it’s delivered from the bowels rather than the lungs and vocal cords. Linkous covers similar territory in the major-key, almost-power ballad ‘Sick Of Goodbyes’ when he rues “if I could just keep my stupid mind together”, making for an interesting disjoint between medium and message. ‘Cruel Sun’ is a similarly harrowing vocal performance, set against layers of shredding and often atonal guitars. The scuffed indie of ‘Ghost Of His Smile’, actually about a lizard who lived in the home-studio, shows Linkous’ empathy for the non-human. The jangle-pop of ‘Maria’s Little Elbows’ is the most conventional moment on Good Morning Spider, which considering it comes with lyrics “like I’ve really come to hate my body / And all the things that it requires in this world”.

However, there’s many more moments of striking, quiet beauty than turmoil and angst, where Linkous sounds like he’s just given up trying to fight whatever he’s feeling. These tracks tend to unfurl with a slowness that’s almost cinematic, one that makes you want to stop breathing so as not to shatter their ambience. The aching innocence of ‘Painbirds’ is scored through with darkness that’s suggested by the context of the rest of the album. It’s an almost unclassifiable mix of frail synths, gorgeous trumpet and mini-guitar solos. The spindly acoustic ballad of ‘Saint Mary’ (referring to the hospital in which Linkous recuperated) is reminiscent of outsider artist Daniel Johnston, whom appropriately is covered later on in the album on ‘Hey, Joe’ in generous fashion. ‘Come On In’ is another delicate meditation on the soul, taking from the “as I lay me down to sleep” children’s prayer. ‘Sunshine’ manages to sound both warm yet heartbroken, while the bucolic, stunningly beautiful ‘Hundreds Of Sparrows’ uses pianos and mellotron to create a piece of music that feels like the morning sun on your face.

The centrepiece ‘Chaos Of The Galaxy / Happy Man’ is an amazing display of tension and release. Beginning with static ambience and with the hum of an AM radio running through the song until it almost fades into focus, the vivid and strange imagery of lyrics like “I woke up in a horse’s stomach one foggy morning / His eyes were crazy and he smashed into the cemetery gates” take what could have been a decent but merely solid radio hit into something genuinely special and unique. It’s also instructive into how the industry has changed in the last two decades: with the best will in the world, what major label now would trust a character like Linkous now as totally as Capitol did on Good Morning Spider?

Good Morning Spider is the cornerstone of the Sparklehorse legend. Its brilliance, coupled with its creator’s story, generated a fervent cult following for the band. Linkous became a musician that other musicians wanted to work with. 2001’s magnificent It’s A Wonderful Life – a toss-up for best Sparklehorse album with Good Morning Spider, in our opinion – saw him work with other cult icons like PJ Harvey and Tom Waits, the latter of which must have been a dream come true for Linkous as one of his key influences.

2006’s Dreamt For Light Years In The Belly Of A Mountain saw Linkous hook up with producer Brian Burton (aka Danger Mouse) for what turned out to be Sparklehorse’s final album released in the singer’s lifetime. One more record was released posthumously following legal delays, 2010’s impressive Dark Night Of The Soul, which saw Burton and Linkous work with a large number of guest musicians ranging from The Flaming Lips and Iggy Pop to David Lynch.

READ MORE: ‘Needle In The Hay’ – An Introduction to Elliott Smith

The legacy of Mark Linkous was more fully explored in a brilliant documentary film written and narrated by his friend and collaborator Angela Faye Martin, titled ‘The Sad & Beautiful World of Sparklehorse’, in 2016. Exploring his life, his struggles and his art, it is an essential next step for those who want to learn more of the legend. However, as a starting point, no album in their repertoire quite captures the off-kilter, dreamy balladry, nocturnes for the soul and discordant indie of Mark Linkous like Good Morning Spider does.

Listen to Good Morning Spider by Sparklehorse here via Spotify, and tell us what you think below!