Needle In The Hay: An Introduction to Elliott Smith 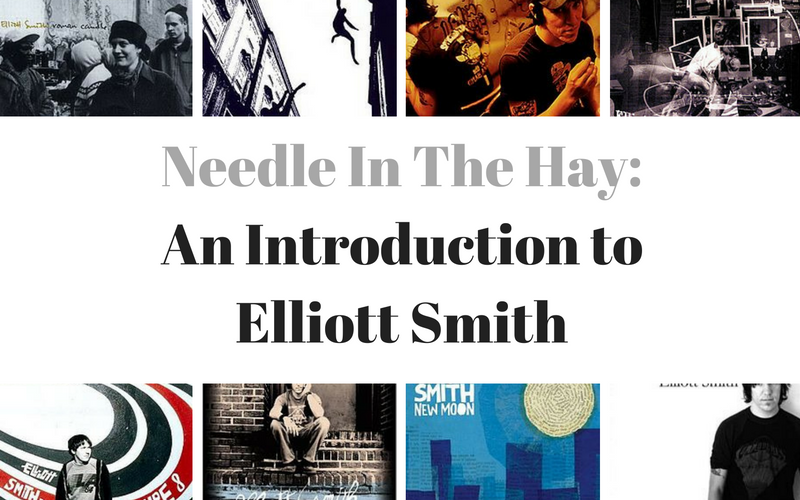 October 21st marks the anniversary of the sad and untimely death of Elliott Smith in 2003, an artist with a hugely deserved reputation for intimate, haunting records yet who only achieved a modest career trajectory in commercial terms. As a result, he occupies an unusual place in the firmament of deceased rock stars. Like Alex Chilton, Nick Drake or Bert Jansch, Smith is celebrated by critics but nevertheless remains within the category of distinctively ‘cult’ artists, famous for being obscure.

Like all the best cult artists, though, Smith inspired a fervent, almost religious devotion amongst those who understood the sublime emotional underpinning of his songs. His writing was open, honest and uncontrived. Particularly on his early records, you get a revelatory yet slightly uncomfortable feeling of listening to a man bearing his innermost. But crucially, it’s never pining, overly-confessional or self-pitying.

For his fans, Smith’s albums are like close friends, comforting and familiar as they reflect back the listener’s anguish. The production values he adopted, such as double-tracking his vocals and multi-tracking his guitars, gave his songs a light and dreamlike quality that stopped them from becoming plodding or overbearing.

Troubled by depression, alcoholism and, in his last few years, heroin addiction, Smith seems to fit the profile of ‘tortured artist’ perfectly, but this is a misleading conclusion to draw. Many of his friends remember him as effervescent and outgoing, as can be seen in the excellent character and musical portrait Heaven Adores You, a 2014 documentary movie that interviewed his colleagues, bandmates and childhood friends. He was showing signs of stability and improvement while working on his sixth album, when he was found dead in his Los Angeles apartment on October 21st, with two stab wounds in his chest that coroner’s verdicts and autopsies have never been able to conclude were self-conflicted or otherwise. But this is not the place to discuss foul play – this article intends to give a whistle-stop tour of Smith’s career for the uninitiated.

While still in the grunge-leaning rock band Heatmiser (a career path pretty much de rigeur for any musician in the North-West of America in the mid-’90s), Smith released his debut Roman Candle in 1994. At barely half an hour long, it’s an instantly well-worn and lived-in collection. Self-recorded in a basement (so intimate that you can hear the strings squeak as his fingers move over them) and virtually unaltered for its release on the tiny Cavity Search label, its comparative but local success was surprising as it went against so many of the prevailing musical trends of the 1990s – solo artists had virtually no exposure in a landscape dominated by grunge. Roman Candle is an album about finding solace in solitude, Smith presenting himself in a manner instantly recognisable to anybody shy, retiring and preferring their own company. Listening to it now is like picking up an old library book whose pages are spotted and yellowed by time.

The following year, Smith signed to the Kill Rock Stars label and released his self-titled second album. Containing one of his best-known songs, ‘Needle In The Hay’, tackling his three demons of unrequited love, drug addiction and mental illness all at the same time and which was later used in a harrowing attempted-suicide scene in Wes Anderson’s The Royal Tenenbaums (2001), Elliott Smith is a fine album that shares many of the characteristics of his debut: carefully picked and strummed acoustic guitars and his whispery-thin voice creating delicate and ethereal soundscapes, though it does create a rather claustrophobic and harrowing atmosphere.

Finally departing Heatmiser, Smith made an artistic shift on 1997’s Either/Or, an important bridge to the remainder of his career. Smith plays more instruments on it while still doing it all himself, and you can hear the Beatles and Big Star influences creeping in on the fuller band-orientated numbers. Alternating between tremulous fear and dark romance one moment (‘2:45 AM’, ‘Between The Bars’) and fragile optimism the next (‘Say Yes’, ‘Ballad Of Big Nothing’), it’s a harrowingly intimate and indispensable collection containing several of Smith’s best songs in a concise 37 minute package, and one of the most essential releases of the 1990s.

Soon after Either/Or’s release, Smith found himself thrust into the spotlight of mass media attention when his song ‘Miss Misery’ was nominated for an Oscar for Best Original Song following its use in the movie Good Will Hunting. This led to a gloriously unlikely performance of the song at the awards ceremony in early 1998, though the award itself was scooped by Celine Dion’s criminal ‘My Heart Will Go On’.

Though Smith flinched at the huge and unexpected publicity, he didn’t baulk at the major label contract with DreamWorks that followed as a result, seeing it is an opportunity to expand his sound further with professional equipment at his disposal. The result was 1998’s masterful XO, the vastly bigger budget being put to brilliant effect. Smith’s natural ear for harmony and melody are fully explored in pop structures like those of Big Star and latter-day Beatles, like the symphonic euphoria of ‘Independence Day’, and the quieter songs like ‘I Didn’t Understand’ are full of gorgeous atmospherics. Fans generally hold XO and its predecessor to be Smith’s finest work.

Unfortunately, although Smith was able to make the greater public exposure work for him on record, in his personal life it affected him badly. A near-death experience following a spell of heavy drinking and use of anti-depressants occurred around this time, and many of his friends noticed him behaving in an increasingly erratic fashion. Nevertheless, a fifth album, Figure 8, appeared in 2000, a flawed masterpiece whose increasingly ambitious sonic tendencies aren’t quite supported by the strength of the songs – still, ‘Son Of Sam’ and ‘Somebody That I Used To Know’ are amongst the best things he ever recorded.

Sadly, Figure 8 would be the last album Smith released in his lifetime. His personal problems deepened amid scrapped recording sessions until he entered rehab in 2002. He recovered slowly and began recording material for what would become the posthumously released From A Basement On The Hill in 2004.

Pieced together by long-time producer Rob Schnapf and Smith’s ex-girlfriend Joanna Bolme to what they thought would have been Smith’s artistic vision, it is an often uncomfortable listen, particularly when it comes to lyrics that in hindsight seem to presage his death. We can never know whether it is what he intended, and is necessarily inconsistent at times, but is a frequently moving epitaph to a career sadly cut short. A final double album of rarities, alternate takes and studio off-cuts from 1994-97 called New Moon appeared in 2007.

Elliott Smith’s style has informed a great many artists subsequently. Most obviously, those who use acoustic guitars like Iron & Wine, Sufjan Stevens and Bright Eyes, but also his influence can be heard in the brooding introspection of The National and the lived-in Americana of Band Of Horses. At the much more commercial end of the spectrum, even massive artists like Ed Sheeran have borrowed the intimacy of Smith’s work and made it work for them.

Smith’s old record label Kill Rock Stars released a compilation entitled An Introduction To Elliott Smith in 2010 which, although brief and tilted heavily toward his early material, serves as a pretty faultless entry point to this most fascinating of back catalogues.

However, you can listen to The Student Playlist’s own ‘Elliott Smith: An Introduction’ playlist on Spotify here, with catalogue highlights picked from all six of his albums, or by scrolling down.