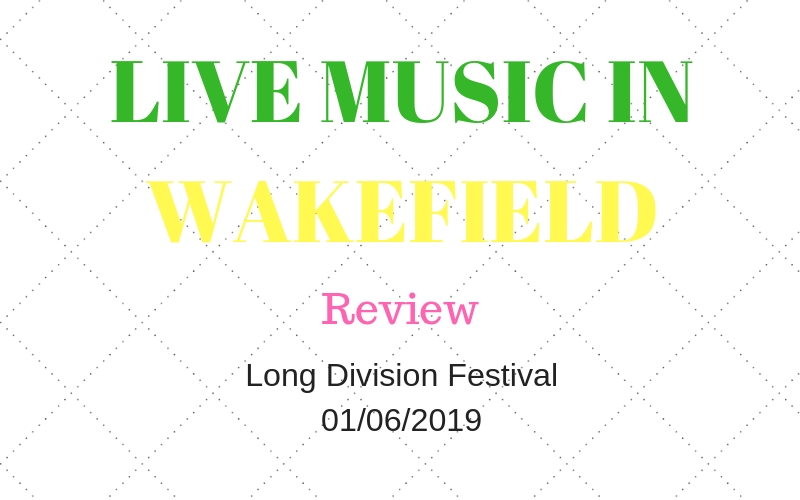 It’s a sunny day in Wakefield on the first day of summer for the 2019 edition of Long Division Festival, and the sound of first band Brooders sound-checking on the public Precinct stage gives a taste of what’s to come. Throughout their impressive set, Brooders draw a sizeable crowd of festival goers and members of the general public drawn in by their psychedelic grunge, with a lone toddler even attempting to start a moshpit. Frontman Adam Bairstow’s Cobain-esque presence on stage brings a seductive darkness to the streets of Wakefield; fully aware of this fact he apologises to any passing old ladies before launching into highlight and latest single, ‘More’.

Next up on the Precinct stage is the perplexing Dewsbury-based collective Knitting Grooves who are playing their first ever gig. Sounding like a cross between Fatboy Slim, Just Jack, and Pendulum, they bring the true spirit of a summer festival, interestingly mixing up drum and bass beats with guitar solos and other instruments. Perhaps the wildest moments are the baffling monologues by the drummer, a strangely alluring attempt to introduce even slam poetry to the mix.

At the Theatre Royale, Long Division festival organiser Dean Freeman opens up proceedings with his own band One Day, After School. Marketed as Slint and Boards Of Canada-esque in the festival pamphlet, in reality they sound more like a gallimaufry of Mogwai, Pineapple Thief, and Codeine. In this intimate setting it is perhaps ironic that the drummer is so far back on the stage, looking more like an animated squiggle than a human being to this poor-sighted reviewer. Nevertheless, they impress with a vibrant mix of atmospherics and electronic overlays, and keep things fresh with a violinist and trombonist towards the middle.

At the Hop, another public venue, My Fake Empire are angular and grungy, with frontwoman Becky Bellinger belting out vocal hooks like Courtney Love. Unfortunately, they are not fully appreciated at the venue and seem a little out of place with the clientele of twenty-somethings who don’t really seem interested. Nevertheless, the versatile guitarist manages set a range of moods in their short set, and overall the three-piece seem to enjoy their Long Division slot, despite their unfavourable surroundings.

At Warehouse 23 the colourful Menace Beach attract a mixture of curious festival-goers and rabid fans, illustrating the rising popularity of this Leeds-based psych collective. At the front, ‘Black Rainbow Sound’ ushers in a paroxysm of energy from Menace Beach die-hards and a cacophony of rhythmic foot-tapping from first-time listeners. At points they become synthetically punky before drawing it back to whirly soundscapes, giving the crowd a chance to catch its breath. Front-duo Ryan Needham and Liza Violet together have a great stage presence and beguiling Liquid Sky aesthetic.

At the Mechanics Stage, local darlings Cowtown play their fun synth pop-rock to a packed audience, exploding into classic tunes like ‘Ski School’ and ‘Monotone Face’. The inter-song banter is funny and relaxed, a given for a band that has been going for almost ten years now. A few new songs from an upcoming release are enthusiastically received, and everyone leaves the Mechanics Stage a little happier than when they went in.

Rounding off Long Division in style is Mik Artistik’s Ego Trip who treat Henry Boons Pub to a hilariously surreal 45 minute set. ‘Sweet Leaf Of The North’, chronicling the harrowing journey of a leaf trapped behind a windscreen wiper is a poetic epic, and ‘Car That Makes A Bus Sound’ reminds us that cars, usually SUVs, make a lot of noise. Mik Artistik’s ever-so-slightly stand-offish delivery adds to the comedy just as much as his terse, quintessentially Yorkshire delivery. (Jake Leigh-Howarth)