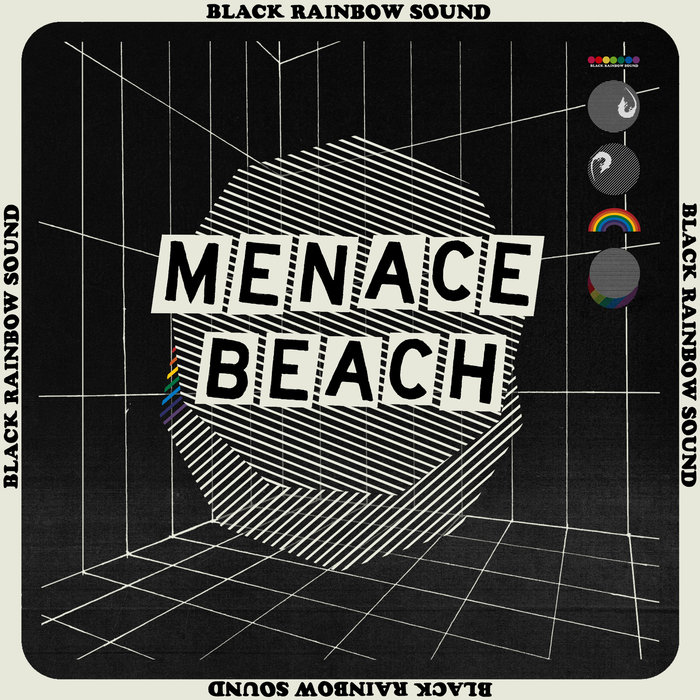 Black Rainbow Sound accelerates the Leeds-based indie/psych rock group Menace Beach to new heights, surpassing their two previous efforts. Finally, they cement the concept of an album by creating a tightly cohesive yet weird and unique project with a sound perfectly reflected by the title Black Rainbow Sound – an intangible combination of the ominous and the celestial.

On their 2015 debut Ratworld it was the contrasting harmonies of Ryan Needham and Liza Violet that dominated the album, with Violet’s soft and silky vocals against Needham’s rougher and more masculine voice. Clearly the band recognised the power of these harmonies, as on the opening title track of Black Rainbow Sound, they are presented front-and-centre, the first thing to hit you before the light and bouncy beat of a drum machine, along with the guest vocals of none other than former Fall member Brix Smith.

Not unlike many other rock bands, particularly The Kills, Menace Beach have turned more significantly to dance and electronic music than ever before, integrating it with their existing indie-psych sound. The loud, almost over-powering beeping synths on ‘Crawl In Love’ tightly lead into a thick hysteria of guitars, synths and vocals, making a significant contrast from their more fuzzy and rock-based sophomore album Lemon Memory.

It is the contrasting and the melding of the two opposing concepts of beauty and horror that makes Black Rainbow Sound such a triumph. Standout lo-fi track ‘8000 Molecules’ combines as a slow, dark synth against a subtle backing of fast and mystical harp progression with Violet’s angelic and sharp vocals leading to a final moment of intensity. On ‘Hypnotiser Keeps The Ball Rolling’, Needham’s ghoulish vocals, the piercing backing vocals and the trembling horror synths create a haunting atmosphere, but the drumbeat and guitar solo ensure that the indie energy is retained. Similarly, the final track ‘(Like) Rainbow Juice’ opens with a trippy and hypnotic circus-like theme before immediately shifting to a beautiful and minimalistic interlude of mellow harmonies and a delicate keyboard riff.

It can’t be denied that Menace Beach have significantly matured and refined their sound along the way to Black Rainbow Sound. While they still could go even further, it’s an impressive switch-up, setting their own standards even higher. (8/10) (Sandie Garland)

Listen to Black Rainbow Sound by Menace Beach here via Spotify, and tell us what you think below!