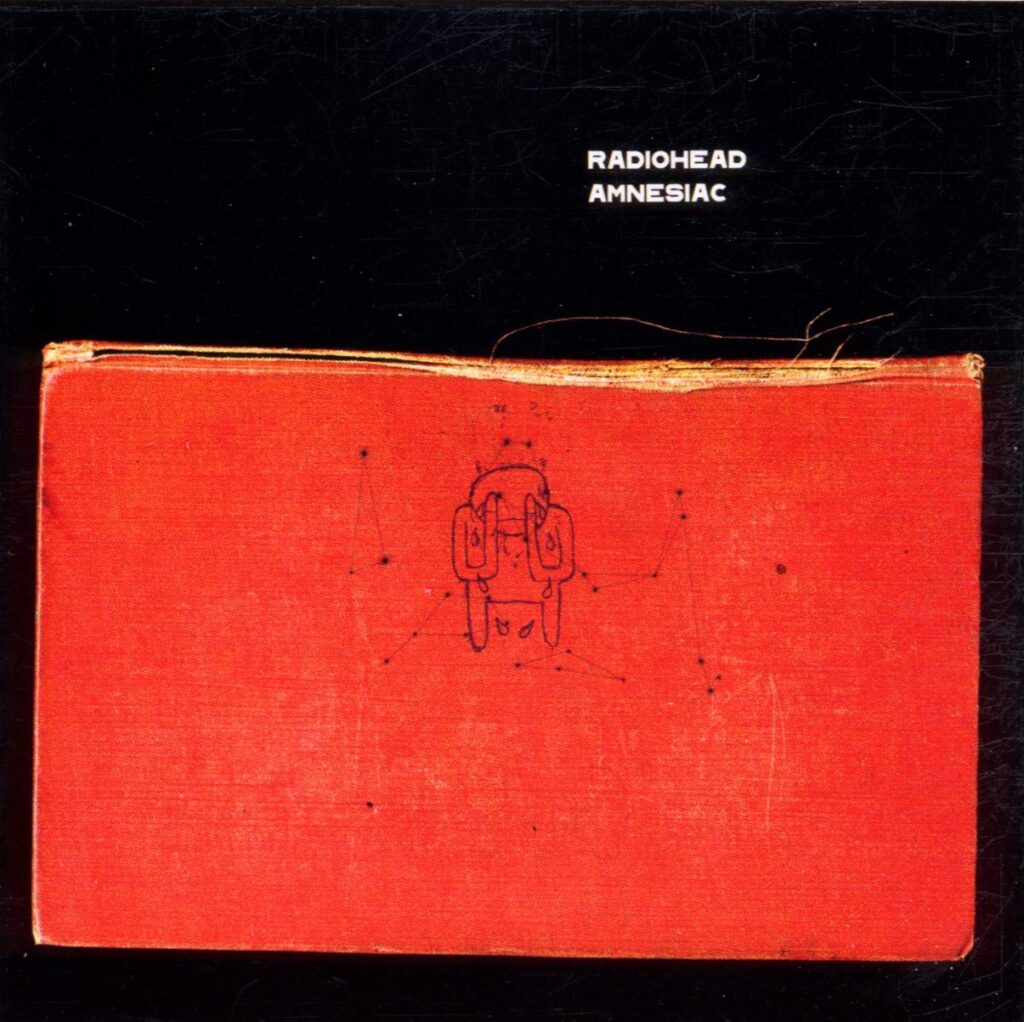 Arriving as it did so shortly after the revolutionary shock of Kid A that left rock critics and cultural commentators divided as well as Radiohead’s own fanbase, 2001’s Amnesiac has always been doomed to dwell in the shadow of its illustrious predecessor. It’s not as good as Kid A, no, but it certainly needs to be re-stated that Amnesiac is an incredible record, and one that would, if it was released by almost any other band in history, be heralded as a masterwork. Instead, Radiohead fans have tended to regard it as one of the group’s lesser works – which, in the context of a career that’s also contained OK Computer and In Rainbows, is probably fair comment. But that doesn’t do justice to a record that has at least as much of a material part in explaining the most radical move in the career of one of the world’s most talked-about bands.

Radiohead had initially been tempted to release Amnesiac jointly with Kid A as a double album, as its eleven songs had been recorded during the same sessions. It’s a damn good thing they decided against this – not only would it have been a horrendous, retrograde cliché whose action would have run counter to their general anti-music industry stance of the time, but it just wouldn’t have made sense artistically or from a listener’s perspective. Kid A was a closed ecosystem, one that didn’t have any obvious singles and where every piece made sense as part of the larger whole. Amnesiac, for all its strengths, doesn’t have that quality. To have released them as part of the same, 21-song package would have bluntened and diluted the impact of both albums.

The common thread that holds Amnesiac together, if there is one amid the diverse styles on display, is that it was largely the the band working in “the old approach of all being in a room playing together” as opposed to “the other extreme of manufacturing music in the studio” that had defined the radical experimentalism of its sister album. Indeed, some of the early press regarding the album tentatively billed it as Radiohead’s “return to guitars” following the left-field, electronically defined Kid A, perhaps flagged up by ‘Knives Out’, a pre-existing live favourite among fans, being touted for its tracklisting. The Guardian’s own review of the album was headlined “relax: it’s nothing like Kid A”. The fact that the band were releasing singles at all from Amnesiac perhaps fuelled this perception, too.

What fans ended up getting, however, was not quite that simple. While Kid A had the element of surprise on its side, it perhaps wasn’t surprising that many initial reviews felt that Amnesiac was simply a more uneven retread of the same territory. We do get experiments involving electronica, 20th-century classical music, jazz and krautrock, with synthesizers, ondes Martenot, drum machines, strings and brass all variously playing prominent parts, making it feel of a piece with its predecessor. The listening experience was, once again, one of textural and dynamic variety, this time punctuated by some of Radiohead’s strongest ever individual songs, and ones that make sense outside of the context of the album itself.

The submerged, doomed ballad of ‘Pyramid Song’, certainly a downbeat and challenging choice of first single for the album and the band’s first for well over three years, is an ethereal beauty whose immense care and sense of purpose is spellbinding. Musically informed by Charles Mingus’s ‘Freedom’ and whose metaphysical lyrics were inspired by ideas of cyclical time discussed by Stephen Hawking and Buddhist philosophy (“All my lovers were there with me / All my past and futures / And we all went to heaven in a little row boat / There was nothing to fear and nothing to doubt”). It certainly seemed a little caricatured in terms of popular (mis)perceptions of Radiohead’s music – even I eye-rolled slightly when I heard its radio debut – but ‘Pyramid Song’ set the tone perfectly for Amnesiac, and stands up as one of their most singular, atmospheric moments.

The dank and airless claustrophobia of low-key opener ‘Packt Like Sardines In A Crushd Tin Box’ put listeners in the same headspace as Kid A’s ‘Everything In Its Right Place’, telegraphing eternal Radiohead themes of individuals being helplessly swept along or persecuted by human systems (“I’m a reasonable man, get off my case”). The taut, cyclical riff of ‘I Might Be Wrong’, underpinned by drum machines, and the spectacular climax of the gnarled ‘Dollars And Cents’ are two of the more guitar-orientated moments, albeit strongly influenced by avant-garde or art-rock tendencies. Much more conventional was ‘Knives Out’, the album’s second single, based on a sprawling, airy Johnny Marr-esque guitar figure that’s uneasily juxtaposed with an urgent Yorke lyric referencing cannibalism.

An undisputed highlight was Amnesiac’s closer ‘Life In A Glasshouse’ – Radiohead album closers are always good – which sounded a queasy note of anxiety about political apathy in the affluent West. Though it was recorded before 9/11, lyrics like “I’d like to sit around and chat / but someone’s listening in” in the context of mass, online surveillance and corrupt, unaccountable decision-making in the 21st century resonate all the more powerfully. Set to a gorgeous New Orleans funeral march rhythm featuring British jazz icon Humphrey Lyttelton on trumpet, it perfectly summed up the claustrophobia and dread of Amnesiac’s themesas a whole.

The key difference that makes Amnesiac a slightly lesser work than its older brother was that the backdrop of tracks in support of those key moments wasn’t quite as consistently brilliant as Kid A – or, perhaps more accurately, Radiohead’s fanbase disagreed as to the relative merits of many of those tracks. Standouts for some were self-indulgent excesses for others. The drowsy, Ink Spots-esque blues lament of ‘You And Whose Army?’ was one of the most controversial tracks, many feeling that Thom Yorke’s dead-eyed, accusatory vocal was too detached to be political in the way that the lyrics themselves tried to convey (“come on if you think you can take us on”). But Yorke’s reaction to Blairite corruption had been one not of resignation, as perhaps his vocal performance could be misinterpreted as communicating, but one merely assured of the inevitability of the downfall of all corrupt politicians. A stance that perhaps hasn’t aged well in the context of Britain’s government in 2021…

The coldly atmospheric interlude ‘Hunting Bears’ also came in for some criticism, as did the dubious inclusion of another, dreamier version of Kid A’s ‘Morning Bell’, and the boldly experimental duo of ‘Pulk/Pull Revolving Doors’ and ‘Like Spinning Plates’. The former was borne from a ProTools experiment that contained snippets of OK Computer sessions, resulting in spectral tape loops. While some, perhaps rightly, felt it was a querulous inclusion, the same couldn’t be said of ‘Like Spinning Plates’. A stunning feat of atmosphere and sound design featuring backward, ‘Twin Peaks’-esque vocals, it’s also a piece of high drama – check out the stripped-out piano-based version on live album I Might Be Wrong – it stands as one of Radiohead’s most outré moments, even by their standards. But all these moments served as opinion splitters, critically adored by some but not universally loved, and that was what brought down the album in comparison to Kid A.

Some criticisms of Amnesiac at the time centred specifically on this complaint, that Radiohead had fallen between two stools, rowing back slightly on the cultural cachet that Kid A had started to bring them, but still hadn’t recovered the “authentic” guitar sounds that their older fanbase who had loved The Bends and OK Computer still wanted and expected from them. Twenty years later, Amnesiac now makes sense as a fascinating, rewarding part of a distinct era in Radiohead’s career that finished with 2003’s Hail To The Thief, one in which Thom Yorke and his bandmates were redefining their identity on their own terms.At its finest, though, Amnesiac achieved the same thing that its esteemed sister album did – matching the emotional resonance and scope of rock music with the boundless sonic possibilities offered by electronic music.

Listen to Amnesiac by Radiohead here via Spotify and tell us what you think below!