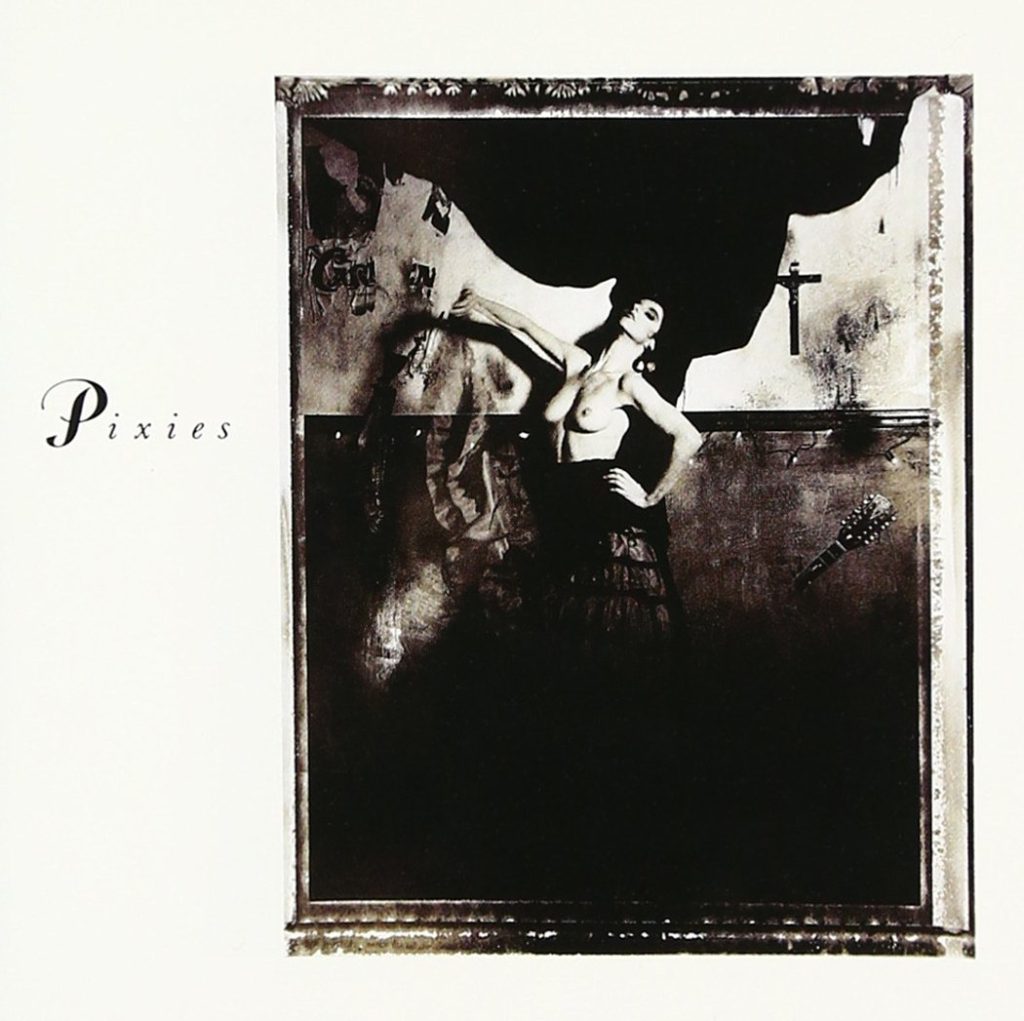 When plotting the origins and progression of the revolution in what was unimaginatively dubbed ‘alternative rock’ throughout the Nineties following the booming in guitar music post-Nevermind, one key point on that journey is the impact of Boston’s Pixies. Although ‘alternative rock’ is a deeply unsatisfying catch-all category that encapsulates everything from cerebral indie like Dirty Projectors to obviously mainstream acts like Foo Fighters, the broad sound that this term has come to denote would sound very different if not for them.

Pixies’ full-length debut album, Surfer Rosa, is a critical part of that legacy, despite often playing second fiddle to its more listener-friendly successor, 1989’s Doolittle, in most discussions of their music. With passages of beautiful melody occasionally shining through behind torrents and jolts of savage, low-end noise, it was refreshingly free of the earnestness that often weighed down a lot of indie in the middle of the Eighties.

Black Francis’s twitchy, yelping vocals and colourful lyrics, concerning incest, mutilation, violence, Christianity and UFOs, were shockingly transgressive for their time. While they now strike the listener in 2018 as slightly dated, that’s mainly because so many subsequent songwriters have tried (and largely failed) to emulate his style. For while Francis unmistakably comes across as ‘a rock singer’, it’s a grotesquely distorted, carnival-fun-house-mirror version of one, with his unearthly screams and grunts, distinctive tics and outbursts of pidgin Spanish.

Formed in January 1986 by songwriter and singer Francis (born Charles Thompson IV) after he dropped out of U-Mass, who persuaded his guitar-playing friend Joey Santiago to do the same, the classic Pixies line-up was assembled almost immediately when local ads brought on board bassist Kim Deal and her friend, drummer David Lovering. Those adverts asked for musicians who held Hüsker Dü and Peter, Paul & Mary in equally high regard – kind of summing up everything that needed to be said about the nascent project’s outlook before a note was even played.

Things happened quickly for the group, with one demo tape raising local interest in the band, and a second leading to the release of mini-album Come On Pilgrim in September 1987, having been signed to the rising independent label 4AD. Their head, Ivo Watts-Russell, hired former Big Black frontman-turned-studio engineer Steve Albini on the recommendation of a colleague, and he and the band hit Q Division studios in Boston just a few days after meeting.

Recording sessions were rapid, taking just two weeks at the end of 1987 as the band remained committed to touring their material and spreading the word. The uncompromising Albini, never one to observe politically-correct mores, filtered out all elements he deemed to be “pussy” and stripped Pixies’ music to its base elements. Surfer Rosa’s striking sound also owes a lot to the deliberate choice he made to force the group into unusual recording practices. Wanting as inhuman a result as possible, Albini told Black Francis to spend no more than a day on his vocal parts, while his studio trickery concentrated mainly on Joey Santiago’s guitar sounds, which took well over a week. He also set up equipment in the studio’s concrete basement in order to capture a natural echo to Pixies’ sound.

Albini’s heavy-as-hell, anti-pop signature runs through Surfer Rosa like the writing in a stick of Brighton rock. The album is left sounding roughly hewn and deliberately unrefined, with what The Quietus’ recent retrospective described as an almost ‘slapstick’ quality in places. Some tracks, particularly in the record’s final third, feel half-finished, and a small number of occasions in which a musical idea outstays its welcome, certainly makes it an imperfect experience. But, strangely, this more often than not works in the material’s favour.

With the cavernous low-end kicks of David Lovering’s drums and the amphetamine, over-excited wiriness of Joey Santiago’s guitars, Albini’s approach amplifies the oddness and menace of the Pixies’ overall vision. Unusually for the 1980s, in which almost all producers sought to crowd out their mixes with the use of cutting-edge studio technology to make the experience as full and immersive as possible, the rather more basic strategy of recording (as detailed above) means that Santiago and Deal’s melodies, counter-melodies and hooks are all very much centre-stage but separated from each other, with Francis’ unhinged vocals sounding like they’ve often been done in one take. Guitar, bass and drums are all clearly audible in the mix, but they’re not drowning any other element out, thanks to the echo achieved by recording in the studio’s basement.

You can hear those results immediately on the opening salvo of ‘Bone Machine’ – the booming drums, serrated guitars and twitchy, hammering rhythms all complement Francis’ bizarre and memorably lyrics, such as “you buy me a soda and you try to molest me in a parking lot, yup yup yup!!”). Rarely has a group’s signature sound arrived so perfectly formed on a debut album, in its very first bars, as on Surfer Rosa. Immediately, the listener has been plunged into the nerve centre of a different world, a gothic, gnarled and humorous take on the events of everyday life.

If there’s one slight critique of the record, it’s the sometimes overly self-conscious weirdness of Francis’ lyrics. They’re not a fault in and of themselves, but they are the one aspect of Surfer Rosa that has not aged as perfectly well as the rest of it. Nevertheless, they do form a significant part of the record’s identity, with his themes of violence and subversion cropping up all the way through the record’s 13 tracks.

‘Break My Body’ and ‘Broken Face’ are the clearest manifestations of this, with Francis’ almost chicken-esque yelping and squawking on the latter making it a real treat. The wiry, vicious ‘Something Against You’ features Francis’ vocals being recorded through a guitar amp, making it sound absolutely satanic. The growling, revving rhythm that underpins ‘Cactus’ tells the story of a prison inmate who wants his girlfriend to mail him a bloody dress.

In the middle of Surfer Rosa’s general off-the-wall chaos are two enduring indie classics. ‘Gigantic’, the album’s only single and also the only track to be written by Kim Deal, is totally amazing. Singing in wonderment about the endowments of a black man and turning it into a pop-punk depth charge, Deal’s lyrics have a worldliness and a natural feel that Black Francis’s deliberately weird style consciously eschews. Popularised by its use on Fight Club’s closing scene with the skyscrapers collapsing, ‘Where Is My Mind?’ may never have been a single but it’s certainly turned into Pixies’ signature song. Anybody even remotely familiar with the last three decades of alternative rock will instantly recognise what’s going on here – indeed, Pixies helped write the playbook of the ‘indie anthem’ with this track, whose zonked melodic line and sense of mischief makes it sound like a polar negative of an FM drive-time rock song.

In among these fully fleshed-out gems are a number of shorter, more sketch-like tracks. While some of these are great as they are, sounding impromptu and ingenious, a couple have always felt like they could have done with a bit more work. On the positive side, there’s ‘Gigantic’s B-side ‘River Euphrates’, which takes a nagging riff and exhausts it while never becoming irritating. The blasts of melodic power make ‘Oh My Golly!’ a frenetic highlight, while ‘Vamos’ is a delightful mix of spacey effects and gibberish cod-Spanish. The playful ‘Tony’s Theme’, with its barking-mad vocal line, is the closest precursor to the listener-friendliness of Doolittle that was just over a year away.

On the downside, the context-free snippet of studio banter that takes up the first 23 seconds of the surf-poppy ‘I’m Amazed’ could have usefully been worked into something more substantial or edited out completely. The totally innocuous ‘Brick Is Red’ sounds like B-side fodder at best, and it’s a shame that these two tracks appear back-to-back at the end of Surfer Rosa to leave the listener scratching their head. It’s in the context of a record that lasts only just over half an hour, but these two tracks, while certainly not poor and containing kernels of interesting ideas, seem inescapably like filler designed to put it over the 30-minute mark. Crucially, they don’t add anything to the character of Surfer Rosa that Pixies haven’t already delivered up to this point.

The most enduring and laudable aspect of Surfer Rosa is that it doesn’t sound like a period piece specific to 1988, unlike a surprising amount of that year’s finest indie albums. Rather, like all timeless classics, it sounds like it could have been made at any point since. Like a lot of ‘80s underground music, it’s a product of the schisms of the punk era a decade before, with the blues influences common to much mainstream rock eschewed for something more angular and skewed. In this respect, it’s similar to quite a lot other indie masterpieces, from ‘70s punk-era albums like Television’s Marquee Moon to more typically ‘90s classics like Slint’s Spiderland or My Bloody Valentine’s Loveless. Of course, the Pixies’ famed ‘quiet-loud’ dynamics had a heavy influence on Nirvana, whose ‘Smells Like Teen Spirit’ proved to be the critical watershed moment for a revolution that impact the Nineties and beyond.

Surfer Rosa performed well in the UK, whose indie music audiences had long kept an ear out for albums like this to wear as a badge of defiance against mainstream rock blandness. In the Pixies’ native America, though, it went rather under-appreciated at first, not really finding its audience until subsequent records like Doolittle and 1990’s Bossanova had made an indentation on MTV territory.

While it’s not quite as focussed and certainly not as musically and texturally diverse as Doolittle, the absolute singularity of Surfer Rosa’s shockingly new sound nevertheless makes it one of the key musical milestones of the 1980s.

Listen to Surfer Rosa by Pixies here via Spotify, and tell us what you think below!