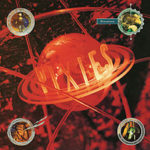 Bossanova enjoys an unfairly deserved reputation in Pixies’ back catalogue as the point where it started to go wrong for them. Surfer Rosa and Doolittle were hugely well received by the American and European indie underground, and did so much to help form the musical template that would become known as ‘alternative rock’ in the ‘90s by influencing, among others, Nirvana. But one tends to hear much less about Bossanova when somebody is re-telling the impact of the Pixies. Why should this be?

Partly because it departed from the bizarre experimentalist slant on punk of their first two records, initially coming across as extremely sensible and calm. Odd, then, that it should have come at a slightly troubled time in their history – having toured Doolittle relentlessly in 1989, the band had become tired of each other and needed a break. When they returned after a few months, the sessions for their third album ran into trouble. It was assembled in something of a hurry, after the group had problems finding a studio. Almost all of the 14 songs were recorded in the studio, with virtually no demos laid down, and Black Francis was regularly coming up with lyrics on the spot, writing them on napkins five minutes before recording.

Everything on Bossanova is much more measured and stable, and almost all of it is played a steady, patient pace. When you think of the Pixies, these adjectives probably aren’t qualities that you would immediately associate them with. The rabid, chaotic punk of their first two albums was replaced by a sound inspired by surf rock and space rock. In addition, Gil Norton’s sparser production quality opened up new space in Black Francis’ arrangements, and as a result, Bossanova comes across as a chromed, heavily stylised version of the Pixies.

The musical shift accompanied a subtle change in the subject matter, moving from biblical, surrealistic references to songs about science fiction and space travel. It’s telling that there’s so songs by Kim Deal, who had poured her writing efforts into a side project having formed The Breeders and recorded their debut album Pod during their very brief hiatus. Pixies set their stall out on the opening instrumental, a sleek cover of The Surftones’ ‘Cecilia Ann’. The theremin-driven, sci-fi themed single ‘Velouria’ features a reedy guitar solo, and is a typical representation of the change in sound on Bossanova. This is followed by the first of two cute power-pop miniatures, the choppy 1:17 blast of ‘Allison’, and the second, ‘Ana’, is a cryptic yet rather charming number. The echoing drum beat and stadium rock scope of the album’s other single, ‘Dig For Fire’, is a self-confessed Talking Heads homage, according to Black Francis.

Elsewhere, Gil Norton’s production really opens up a sinister side to the group, like on ‘Is She Weird?’ and the Area 51-inspired ‘The Happening’ which both boast cold, creepy guitar and bass riffs. Only on ‘Rock Music’ and ‘Hang Wire’, both short punk tracks, do we really hear Black Francis’ trademark tortured scream. Admittedly, there are a couple of indifferent tracks, like ‘Down To The Well’ which aside from its lyrics about UFOs and alien abductees, and the overly long and sterile ‘All Over The World’. But all things considered, there’s basically no evidence for why Bossanova shouldn’t enjoy ‘great album’ status aside from the fact that it followed two albums that were even greater.

So, while it may not be their best-loved album, and certainly isn’t their best, Bossanova has a certain oddball charm, and it opened people up to a previously unheard side of the Pixies: a softer, quieter, dare we say, more mature version. It came out to an initially muted response, and was unfairly criticised in some quarters upon release for its departure from the rough-hewn sounds of Doolittle. But, as time has gone by, it has enjoyed a positive revision in the eyes of fans, and it remains a curious yet accessible album. It would be the penultimate record of their original incarnation – the giddy, cartoonish pop-punk of Trompe Le Monde followed in 1991, before the Pixies broke up for the first time.