REVIEW: The National Parks – ‘Until I Live’ (Groundloop) 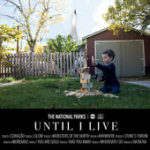 Front cover of ‘Until I Live’

Utah seven-piece band The National Parks found modest success with their 2013 debut album Young, with a certain compositional simplicity in tracks like ‘Helsinki’ and ‘Wind & Anchor’ that showed a natural knack for the intricacies of folk music. For their sophomore effort Until I Live, lead singer Brady Parks has said they’ve attempted to lean in a more populist direction without entirely abandoning the sound of their first record, based on advice from their manager who recommended that they focus on the music they would want to listen to rather than the expectations of fans. That’s perfectly sound wisdom in theory, but in practice it’s had the effect of watering down The National Parks’ appeal, making Until I Live perfectly pleasant but resolutely unremarkable.

Opener ‘Coração’ typifies the tone and demeanour of the album: Brady’s piercing voice delivers some wide-ranging and non-specific lyrics like “the street is alive as the sun goes down” and “when you reach the end but miss the start” as it goes through a predictable, nu-indie anthem song arc. For the most part, they work to this unchanging folk-pop template in the vein of The Civil Wars, Of Monsters And Men and The Lumineers, churning out solid slices of early afternoon festival fare. ‘Anywhere’ smoulders promisingly, like the beginning of a particularly epic Coldplay track, but never actually ignites, building the tension but not providing the release for it. The gentle acoustic guitar plucks of ‘You Are Gold’ sees them revisit the folk of their debut, which is much more satisfying.

Until I Live works much better when the drums are used as the main engine to drive a song forward, such as on ‘Monsters Of The North’, ‘Meridians’ and ‘Take You Away’ which have a different, less predictable vibe to the rest of the album. The latter, the eighth track on the album, sees Brady Parks duet with a female voice, whose arrival provides a much needed change in dynamic. However, the new, brighter and shinier production techniques have bleached out some of the sepia-tinted qualities of Young. In the transition, The National Parks have lost some of the natural, effervescent charm that made their debut the low-key success that it was. There’s absolutely nothing wrong with Until I Live, but there’s also nothing to set it apart from the rest of a very crowded marketplace. (5/10)

Listen to Until I Live here!