REVIEW: The Maccabees – ‘Marks To Prove It’ (Universal / Fiction) 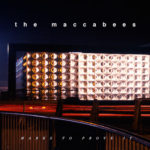 Front cover of ‘Marks To Prove It’

For some reason, I’ve always associated The Maccabees with indie dance club hooliganism. After a gruelling recording process, they’ve dropped their fourth release – and it wasn’t an easy birth. Written and recorded solely in the band’s small London studio, Marks To Prove It may as well be named after the paranoid wall etchings of a mental patient holed up in a cell. “It’s tough because you’re not going anywhere else and you know for a long time that it’s just these walls,” said guitarist Hugo White to NME. “I think if we’d just met each other and decided to do a record and it was this record, or it at least took the same amount of time [as this record], then we would have given in and said it wasn’t working.” Hardly a glowing endorsement there, but an awful lot of worthwhile records have been borne out of such difficulties.

Marks To Prove It jangles to life with the tempo-shifting title track that blends awkward riffing with almost choral walls of sound and spiralling keys. Orlando Weeks could have injected more power into the hyper-ventilating vocals, but instead he chooses to keep them low, simmering just below the surface – and the result is irresistible. It’s a bold move front-loading what’s possibly the album’s strongest play, but there are more treats to be unwrapped. ‘Kamakura’, a forlorn cross between Bombay Bicycle Club and Jose Gonzales, delivers a quavering chorus amid writhing guitars, before the soaring, Smiths-aping ‘Ribbon Road’. It’s neatly executed though, and not nearly so overbaked as its lengthy recording process would suggest.

The viscerally titled ‘Spit It Out’ belies a soft, slowly building tear-jerker that will have Radiohead fans glancing at their screens to double-check the artist. “What do we do now?” pines Weeks. It’s an understandable question after two consumptive years in the studio. His voice peaks and cracks in the chorus over banging pianos and shrill guitar noodling. It overshadows the succeeding bland balladry of ‘Silence’, which becomes lost in a slight middle sag. Horn-laden waltz ‘River Song’ is a depressing trudge, thanks to nonchalant delivery, but things pick up with the carefully-plucked, Foals-esque ‘Slow Sun’.

War wounds are exposed with the rattling drums and pulsing guitar of the stirring ‘WWI Portraits’, before the ticking, almost mariachi feel of closer ‘Dawn Chorus’. At times it’s harrowing and raw, but drawing comparisons with Arcade Fire, the kings of this kind of style, would be over-zealous. “Break it up and make it better,” sings an almost mumbling Weeks, who seems to be trying his hardest to be drowned out by the choral backing vocals, softly tingling percussion and ‘Homeland’-themey brass. Despite occasional rays of sunshine, Marks To Prove It is a sombre play from start to finish. It’s dense, clever, and undoubtedly some of their best work lies among the 40-or-so minutes. But it seems so much thought has gone into mining emotions and revitalising their sound that the Maccabees have forgotten to have fun. (7/10)

Listen to Marks To Prove It here!