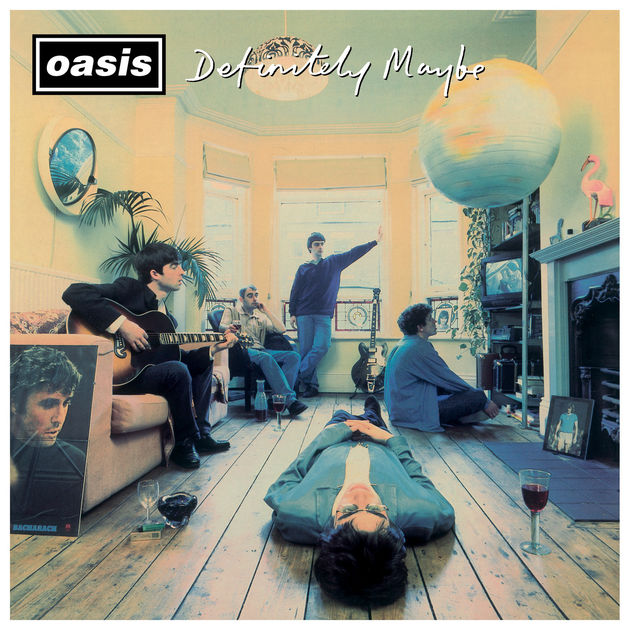 Oasis defined Britain in the 1990s possibly more than any other cultural phenomenon. ‘Wonderwall’, ‘Don’t Look Back In Anger’, ‘Live Forever’… these songs were the soundtrack to the middle of the decade at the dizzying heights of Britpop, so much so that it seems odd to think that there was once a time when they didn’t exist.  But that was Noel Gallagher’s knack, the one that made him his millions: to take something utterly familiar and make it life-affirming, soul-enriching.

Of course, though their success now seems somehow pre-ordained looking back at it, Oasis started somewhere, and they certainly weren’t fully formed when they did. Noel’s younger brother Liam, inspired by seeing The Stone Roses in Manchester at the turn of the ’90s, had started hanging round with an aspiring but fundamentally directionless indie band called The Rain, consisting of Paul McGuigan (rhythm guitar), Paul ‘Bonehead’ Arthurs (bass guitar) and Tony McCarroll (drums). Noel listened to them rehearsing and saw potential. He offered them his help with conditions attached: that he wrote all the songs and led rehearsals from now on. They changed their name, rehearsed hard with dozens of songs that Noel had already penned over the last four years, and started performing at Manchester’s Boardwalk venue.

Creation record label head Alan McGee saw Oasis at Glasgow’s King Tut’s Wah Wah Hut and, though they were still rough ‘n’ ready, offered them a contract on the spot. Preceded by four singles, each of which performed better on the charts than the last, Definitely Maybe was finally unleashed at the end of August 1994. Its release had been delayed in the recording process, because none of the engineers or producer could replicate the band’s live sound on record.

Having tried a number of options, Creation commissioned emergency sessions at the remote location of Sawmills Studio in Cornwall, and when they didn’t sound satisfactory either, they turned in desperation to young producer Owen Morris and essentially instructed him to do anything he liked to the Sawmills recordings. He used an unusual mixing technique known as ‘red-bricking’ that involved turning up all of the bass and guitar tracks up high to the point of distortion, which gives Definitely Maybe that unmistakable hissing, crunching noise. At last, the force of nature that was Oasis’ sound had started to come through. Morris would work with Oasis for the rest of the ‘90s, including on the wantonly excessive Be Here Now.

Definitely Maybe’s success is built not only on the continuity and consistency of sound that Morris lent it, but also the sheer melodic power of Noel’s songwriting. The opening guitar whine and drum surge of ‘Rock ‘n’ Roll Star’ heralds the piece – even after all these years, its vital energy hasn’t diminished at all. It’s a testament to the strength of the album that it was never released a single. ‘Shakermaker’’s deliberately Lennon-esque lyrics (“now he stops at traffic lights / but only when they’re green”) may be slightly amateurish but hint at greater things to come.

‘Live Forever’’s glory is so well documented that it’s barely worth repeating, suffice to say it’s a microcosm of Oasis’ sheer universal emotional power when they’re at their best, even though its melodic line cribs directly from the Stones’ ‘Shine A Light’. ‘Up In The Sky’ showcases Liam’s then incredible voice, pitched somewhere between Lennon and Lydon, and re-injects some kinetic energy into proceedings. ‘Columbia’ is a perfect collision of psychedelia and volume, ending with its swirling vortex of an outro.

The band’s first single ‘Supersonic’ (featuring wilfully nonsensical lyrics like “I know a girl called Elsa / she’s into Alka Seltzer / she sniffs it through a cane on a supersonic train”) puts things back on a pop trajectory before the all-out punk delivery on ‘Bring It On Down’, the only track here that betrays the band’s origins before Noel joined. ‘Cigarettes & Alcohol’, again though it appropriates T.Rex’s ‘Get It On’ and rides it all the way through the end, is a winning anthem with some generation-defining lyrics (“is it worth the aggravation / to find yourself a job when there’s nothing worth working for?”).

Even the throwaway ‘Digsy’s Dinner’ is a memorable, light-hearted romp about lasagne – check out the 10th anniversary documentary about the album for an interview with the real ‘Digsy’, who is a colourful character, to put it mildly. The album’s defining moment comes just before the end: the scarred optimism of ‘Slide Away’ is full of sentiment but succeeds because of the sheer force of conviction in Liam’s delivery, a kind of shorthand for Oasis’ success as a band. The acoustic closer ‘Married With Children’ ends things on a mellow note, recorded in one take in Liam’s bedroom.

Its reception surprised even the most optimistic people at Creation. The label, having been responsible for an impressive number of critically well-received albums over the last ten years (My Bloody Valentine’s Loveless and Teenage Fanclub’s Bandwagonesque), had finally hit upon its commercial cash cow. It sold 86,000 copies in its first week, making it the fastest-selling debut ever at the time, and to date, it has sold just shy of two million in the UK.

Of course, its successor (What’s The Story) Morning Glory? went on to become the second biggest seller of all time the following year. The album’s legacy lives on through new generations of converts: upon its 10th anniversary, it was reissued and, rather extraordinarily, became the 45th biggest seller of 2004. Tales of debauchery in the aftermath of Definitely Maybe’s success are the stuff of legend, and are detailed in an excellent documentary entitled Upside Down: The Story of Creation Records.

But it isn’t the nostalgia that makes Definitely Maybe great, and neither is it the incalculable influence it’s had on so many British bands since, not even the sales figures and the chart positions. It’s the nature of that success: five working class men from Manchester shaking up a complacent and fundamentally middle class music industry, inspiring, connecting with and giving hope to so many regular people, even twenty years after its release, is why Definitely Maybe remains so great, long after the band itself got stuck in its creative rut by the end of the decade. The critics can sniff and dismiss all they want (they did, and still do). But, frankly, they can do one. Sometimes you need entertainment over art.

Listen to Definitely Maybe here via Spotify, and tell us what you think below!