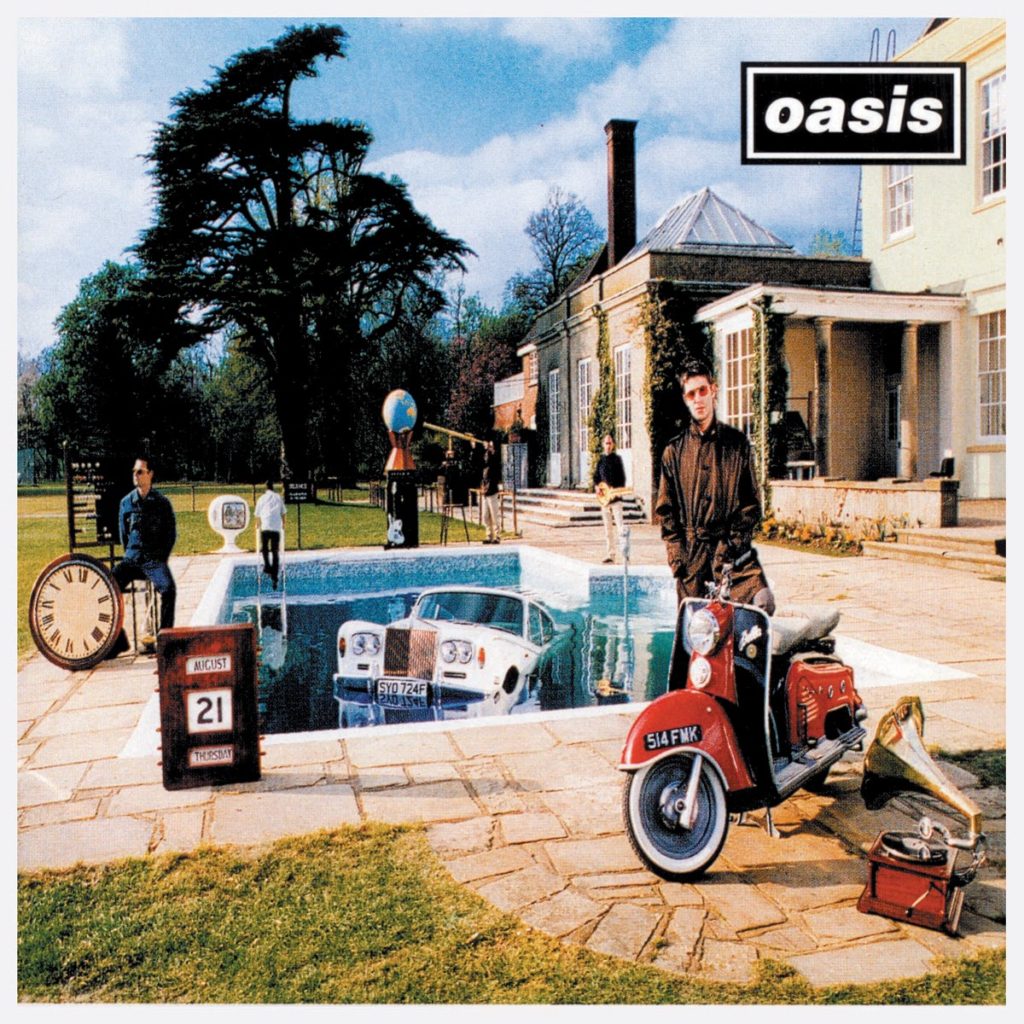 Oasis did so much to define Britpop in the minds of the British and international public in the mid-Nineties – scoring the biggest-selling album since Sgt. Pepper’s Lonely Hearts Club Band with 1995’s (What’s The Story) Morning Glory?; playing Knebworth to 250,000 people over two nights in August 1996; tales of the warring Gallagher siblings splashed all over the tabloids for years. At the heights of their imperious best, Oasis sold more singles than other bands did albums. However, their third album Be Here Now arguably did just as much to destroy Britpop as a cultural phenomenon.

21st August 1997 is now frequently viewed as the exact point at which the bottom fell out of the British guitar music revival of the mid-Nineties. Be Here Now failed in two important respects – everything about it was absurdly overblown (“cocaine set to music”, according to Q), and most of the songs weren’t as good. Suddenly, in the context of 1997 and the release of sonically expansive masterpieces like OK Computer and Ladies And Gentlemen We Are Floating In Space, Oasis looked like they were lagging behind the field rather than leading it. Even The Verve’s ‘Bitter Sweet Symphony’, released two months earlier, a song whose confidence and bravado seemed to take the cornerstones of Oasis’ success and stretch them to new creative places.

Even on a first glance of the track-listing, an Oasis fan of the time could have figured out something was amiss. A whopping 71:33 minutes long (a good 20 minutes longer than either of its two predecessors), other than the brief reprise at the end the shortest track on Be Here Now was 4:22. Four of its 12 tracks lasted seven minutes or longer. Everything about it, from the trebly production with layer upon layer of guitar tracks piled recklessly and indistinguishably on top of one another so it sounds almost like radio static, to the bullshit ‘cryptic’ cover art, screamed over-indulgence and excess. On Definitely Maybe, the producer Owen Morris succeeded by stripping out the aural excesses and ramping the essentials up to 11 with his ‘red-bricking’ production style; three years later, Morris seemed to be doing the opposite, encouraging the band to chuck everything in, with no critical filter.

Indeed, the biggest critic of Be Here Now turned out to be Noel Gallagher himself, claiming that in the haze of cocaine excess and sycophancy, there was nobody in the studio to rein in the excess. Sure, it sounds absolutely massive in places, but it’s all empty calories, an artificial sugar rush followed by a feeling of emptiness. Case in point: the record’s third single, ‘All Around The World’, clocks in at over 9 minutes and is still the longest number one single in UK chart history. A song-sketch that Oasis used to soundcheck at live gigs with since way back in 1993, it speaks volumes about Noel’s lack of original ideas on Be Here Now that such a song should be pumped up in an attempt to make it the album’s show-stopping centrepiece.

‘Magic Pie’ is a turgid mess of a track, symbolic of everything that’s wrong about Be Here Now as a whole. Far too long and petering out almost before it’s begun, its inclusion was doubly criminal when one considers it nudged out the genuinely quality ‘Stay Young’, a reminder of Noel’s ability to write great, energetic sing-along anthems which eventually emerged as a B-side to ‘Stand By Me’. Similarly, the album’s title track is an absolute stinker, absurdly heavy and bombastic – the sound effect of a toilet flushing at the song’s conclusion says everything. The interminable ‘Fade In-Out’, featuring Johnny Depp’s self-indulgent guitar wankery, was entirely surplus to requirements, and the ridiculously OTT lead single ‘D’You Know What I Mean?’ seemed like Noel was trying really hard to make some kind of generational statement but coming across as vacuous (“all my people right here right now [big statement coming…] / d’you know what I mean? [erm, what?…]”)

However, for all the trashing, there’s something resembling an emotional core to Be Here Now, a spine of five or six fundamentally solid tracks that makes the album a compelling spectacle even as it misses its target. After all, beneath the garish and shiny production, Noel Gallagher and the band aren’t doing anything different to what they’d done before, sticking to the same formula that had brought them success in the perfectly reasonable expectation that it would deliver again. ‘My Big Mouth’ and ‘I Hope, I Think, I Know’ could have been much better if the production had been less full-on, with Liam’s vocals, even at their punky best, struggling to be heard over the trebly din. ‘My Big Mouth’, according to Noel, had something like 30 guitar tracks mixed into it, and it represents a good idea executed badly. Aside from Noel and Liam’s co-harmonising, ‘The Girl In The Dirty Shirt’ is a similar story.

The album’s second single ‘Stand By Me’ is one of two unqualified successes, which succeed precisely because they sound colossal but don’t sound overproduced. With lyrics of universal brotherhood that Noel has always been excellent at writing when he wants to, it’s telling that ‘Stand By Me’ was the only track from Be Here Now that survived into Oasis’ live setlists as the years went by. ‘Don’t Go Away’, released as a single in Australia only, is the other unblemished diamond, Liam’s vocals coming through as clear as a bell in a moment of genuine poise that indicates that Oasis were probably just trying too hard to sound epic on the rest of the album. If they’d dialled it down, it might paradoxically have had more clout.

Be Here Now, when it finally did come out, was like a pop cultural happening all by itself. It shifted 424,000 copies on its first day of sale alone and nearly two-thirds of a million in its first week – doubly impressive since Oasis elected to break with protocol and release it on a Thursday, making for a three-day opening week. It was the biggest-selling album of 1997 in Britain, with eight million copies sold around the world by the same point. However, almost all of those units shifted were done so within the first two weeks of sale – the good vibes very quickly gave way to disappointment as fans realised that it wasn’t as good as Definitely Maybe or Morning Glory – and it’s worth as a thought exercise considering how many of those eight million found their way into second-hand sales or bargain bins within 12 months.

Not that the critical fraternity spotted this obvious dip in quality immediately – far from it. In the days before it was released, Be Here Now received some of the most glowing critical notices that anyone could remember since the aforementioned Sgt. Pepper’s almost exactly 30 years previously. In all likelihood, this may have been to collectively over-compensate for the fact those same critics had shrugged their shoulders at Morning Glory two years before. It’s hard to thinking of any other subsequent record that was this hyped-up and anticipated, with this much hope and expectation projected onto it, except possibly Adele’s 25 or Coldplay’s X&Y. In this context, it’s little wonder that people were disappointed. Music writer Jon Savage puts it perfectly: while Be Here Now “isn’t the great disaster that everybody says… it was supposed to be the big, big triumphal record” of the period. Noel Gallagher was supposed to reinvent the wheel with this album, with impossibly high expectations demanded of it.

When, of course, it didn’t turn out to be anything like as good as it was supposed to have been, for all their millions of fans, Be Here Now had the wider effect of killing the Britpop zeitgeist itself stone dead, creating a vortex that dragged down the careers of many of those bands that had ridden Oasis’ coat-tails to fame two or three years before. Shed Seven, Cast, The Bluetones, Dodgy, Northern Uproar, Kula Shaker, Sleeper, even Elastica… all of these and more suddenly seemed like yesterday’s men.

Coupled with this, it’s also worth remembering that Princess Diana was killed just 10 days later, the grief of a nation killing off the good feelings of ‘Cool Britannia’ and the triumphalist vibes post-Blair’s election very quickly. All of a sudden, the music scene was in ‘post-Britpop’ mode, with a Noel Gallagher facsimile in the shape of Robbie Williams cast as the industry’s saviour – his ubiquitous ‘Angels’, bearing all the same hallmarks as an Oasis anthem but with the edges smoothed out, had demolished the charts by the end of 1997.

The kindest possible reading of Be Here Now could regard it as the last time a British band dared to indulge in the kind of rock-star clichés that belonged in the 1970s, normally reserved for the likes of Zeppelin and Sabbath (or Spinal Tap…). The booze, the drugs, the use of orchestras, the unnecessarily epic song lengths, the wild-eyed if flawed ‘more of everything’ ambition. Come the turn of the millennium and the post-modern death of sincerity in popular culture, no bands dared to operate like Oasis were doing here, to try and fail on a scale this big – not even Coldplay or Arctic Monkeys at the height of their global stardom. Two decades on, Be Here Now could seem more and more like the last of a very specific kind of great rock epic. They failed, but goddammit, they tried.

But let’s not let starry-eyed nostalgic revisionism get in the way here – Be Here Now is not some unfairly maligned forgotten classic. It’s deeply flawed, overblown, overproduced and fell well short of the song-for-song quality of its two predecessors – something that the release of B-sides compilation The Masterplan the following year would throw into sharp relief. Oasis used to tuck away songs on B-sides that other bands would have killed for, but something had been lost by 1997, Gallagher’s Midas touch somehow deserting him or at least not striking nearly as often as it used to.

However, by the same token, Be Here Now was far from the disaster that an initial glance at its reputation would suggest. Certainly, it’s better than 2000’s moribund Standing On The Shoulder Of Giants, and in terms of average song quality is probably no better or worse than 2002’s Heathen Chemistry, 2005’s Don’t Believe The Truth or 2008’s swansong Dig Out Your Soul. If one was to be very generous, it’s a 6/10.

Unfortunately, because of the context of its release and what was at stake, a 6/10 wasn’t nearly enough, and Be Here Now will likely forever be remembered as The Album That Killed Britpop. Certainly, it represented the torch being dropped, which was quickly picked up by Richard Ashcroft and The Verve as Urban Hymns sold more than 3 million copies over the following year. Twenty years later, what was supposed to have been Oasis’ Sistine Chapel sounds as inherently flawed as it did in 1997. But while Be Here Now may have been a huge disappointment, it wasn’t a disaster then and still isn’t now. Perhaps it’s time to stop using it as a punching bag.

Listen to Be Here Now here via Spotify – does it deserve its reputation?