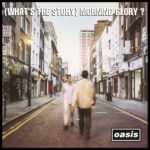 Whenever a new band breaks out and receives hype from the music press, the reaction from the general public is often sceptical or scornful. “They’ll never be as big as The Beatles” was something that generations of new music lovers have from their parents or grandparents. But for a fleeting period in the mid-nineties, Oasis actually were, and that status came off the back of their gargantuan second album (What’s The Story) Morning Glory? Everybody owned it, or taped it from somebody who did (remember when that was a thing?)

The statistics surrounding the album speak for themselves: 20 million copies sold around the world, with 4.6 million sales in the UK alone; seven consecutive months in the UK Top 3; the 2.5 million people applying for tickets for their 1996 Knebworth blow-out, meaning Oasis could have played 53 sold-out nights consecutively to satisfy demand… truly stratospheric figures. In the twenty years since, only Adele’s coffee-table classic 21 has come even close in terms of raw sales figures and international renown. On their debut Definitely Maybe, Noel Gallagher dreamt of becoming a rock ‘n’ roll star – Morning Glory saw his dreams come true.

But all the stats and figures wouldn’t mean a thing two decades later if it hadn’t endured as a “great record” in the public’s conscience. After all, several albums have sold over 2 million since but have been largely forgotten, with people who bought them allowing these multi-platinum records to gather dust like so much cultural detritus. But Morning Glory has never undergone a critical rediscovery, precisely because it has never really gone out of style, and this is because it has so much shared cultural memory bound up within the music itself. One thinks Britpop, one thinks Morning Glory. It houses three of the five most famous songs of the era (‘Wonderwall’, ‘Don’t Look Back In Anger’, ‘Champagne Supernova’ – the other two being Oasis’ own ‘Live Forever’ and Pulp’s ‘Common People’).

But quite aside from those individual moments of glory, the record is of a consistently high quality throughout. Bursting out of the traps with an unbelievably cheeky vocal lift from Gary Glitter’s ‘Hello! Hello! I’m Back Again’, Oasis sought to recast the whole range of their influences, from ‘60s psychedelia and beat-pop to ‘70s glam and punk, in a new mould of comfortingly familiar. The ‘red-bricking’ and heavily compressed guitars of Owen Morris’ distinctive production on Definitely Maybe remained in place, only this time it was much more finessed. There was an explicit emphasis on big choruses and ballad-like structures, underlined with string arrangements and a wider selection of instrumentation. The musical hand-me-downs are pushed so far to the front that you often felt Gallagher was taking the piss deliberately – one song from the sessions, ‘Step Out’, was so similar to Stevie Wonder’s ‘Uptight’ that it was partly credited to the soul legend and relegated to a B-side – sticking his middle finger up to his critics.

But every exhausted rock cliché is handled so expertly, and mixed in with Gallagher’s own homespun songwriting wisdom and riffs, that it all adds to the instant relatability and populism that Oasis were aiming for. Morning Glory is like walking around in a theme park dedicated to the history of British rock music, representing the peak of a renaissance in ‘60s-style music that had begun five years previously with The La’s and The Stone Roses. The tongue-in-cheek Merseybeat of ‘She’s Electric’ that provides comic relief, sandwiched between the kamikaze attack of ‘Morning Glory’ and the heart-broken ballad ‘Cast No Shadow’ (dedicated to The Verve’s Richard Ashcroft, who would find similar ubiquity two years later) exemplify the atmosphere, intent on celebrating heritage above all else.

As ever with Oasis, it was the lighters-aloft anthems that stole the show on Morning Glory. Third single ‘Wonderwall’ sold a million copies and was almost replaced the national anthem at the heights of Cool Britannia’s optimism in 1996 (it never reached Number 1, although bizarrely the Mike Flowers Pops’ cover version did). Liam Gallagher’s vocal remains beautifully sentimental, showing another, more sensitive side to his normally confrontational delivery. ‘Don’t Look Back In Anger’ saw Noel take lead vocals for the first time in the group’s history, and remains his most explosive and spine-tingling chorus. Closer ‘Champagne Supernova’, despite the self-consciously nonsensical lyrics about slowly walking down halls faster than cannonballs, is an apt metaphor for everything Oasis represented. Gallagher himself has no idea what it means, but that doesn’t matter. “Are you telling me, when you’ve got 60,000 people singing it, they don’t know what it means? It means something different to every one of them” he told The Sunday Times in 2009.

Admittedly, it’s difficult to detach Morning Glory from the context of the time it was made, as it represented both the success and inherent flaws in Britpop itself. The unseemly ‘Battle of Britpop’ between themselves and Blur, the pop equivalent of an after-school fist-fight, also doesn’t help when you look back on it, featuring each group’s weakest singles to date going up against each other in a race for the Number 1 spot (‘Roll With It’ v ‘Country House’). That battle might have seemed at the time like a revival of the Stones v Beatles chart wars of the ‘60s, forcing a new generation of kids to pick sides in what is probably the last instance of a tribal war in British youth culture, but it was actually the cynical result of a media war deliberately stirred up by Blur’s management company and the NME. Blur may have won that battle, but they lost the war, with Morning Glory outselling their rivals’ 1995 effort The Great Escape by a factor of four and capturing the nation’s hearts.

Their 1998 B-sides album The Masterplan reinforced the feeling that Noel Gallagher really was on a hot streak in 1995 that put him head and shoulders above any of his rivals, and that impression is echoed if you listen to the 2014 3xCD reissue of Morning Glory (see bottom of article) which contains moments of heart-rending quality like ‘Acquiesce’, ‘The Masterplan’, ‘Underneath The Sky’ and ‘Talk Tonight’ that other groups would have quite literally murdered for. Gallagher actually wrote three albums of great material; it’s just that it all flowed out of him so quickly that the third got spread over two years of B-sides.

Oasis remained a big deal until their 2009 break-up, capable of filling stadiums around the world, but their success became increasingly hollowed out by diminishing artistic returns, looking more and more like a living museum piece as their core setlist remained static as the years wore on. They were always more concerned with the ends rather the means, the results rather than the process, the cultural omnipotence without the forward-thinking creativity that comes with it. Sort out a massive chorus, and the rest will follow, was their formula.

The bloated, over-produced behemoth Be Here Now, which arrived in blizzard of cocaine and guitar tracks in August 1997, represented the Dionysian excess of Britpop and the artistic redundancy of that formula. The critical panning administered to it, the lukewarm public reception, coupled with the death of Princess Diana just a few days after its release, killed the Cool Britannia vibes around the musical movement stone dead. However, as the heady days of Britpop recede further into memory, Morning Glory will always represent its high water mark: for all its imperfections, encapsulating its time and place like no other album since.

Influenced by: The Beatles, The Rolling Stones, The Jam, The Kinks, The Who, Mark Bolan, Slade, Neil Young, The Stone Roses, Inspiral Carpets

Listen to the 3xCD 2014 reissue of (What’s The Story) Morning Glory? here!