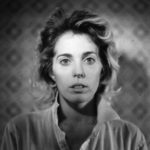 Front cover of ‘Half Free’

Toronto-born Meghan Remy, a.k.a. U.S. Girls, is now onto her sixth record, with Half Free being her debut on legendary indie imprint 4AD. Naturally compared to female contemporaries including Holly Herndon, St. Vincent and Grimes, Half Free follows on from her accessible experimental 2012 record Gem. The vast majority of Half Free is genuinely, startlingly different and this is also representative of the lyrics which are dark, evocative and deal in intimate portraits of the female experience in Western society. The record is populated by women at the sharp end of power relationships, be that social, economic or domestic.

Opener ‘Sororal Feelings’ shares a Portishead-like trip-hop rhythm with darkpop-centric vocals from Remy. ‘Damn That Valley’ and ‘Window Shades’ follow in a similar suit of dark electronic undertone combined with a soulful ESG-inspired vocal. ‘Sed Knife’ is a re-make of an old B-side from 2012 and it steers towards a heavier guitar riff-led rhythm with Remy let loose on the vocals. ‘Red Comes In Many Shades’ is a woozy, downbeat affair which perfectly highlights the genre diversity across the record, mixed with pop sensibilities. ‘Woman’s Work’ and ‘New Age Thriller’ sound slightly dense in comparison to the brighter moments on the album, but the poorer tracks are few and far between.

Whilst Half Free will likely remain on the fringes of the mainstream, but for those willing to explore it will find that Remy manages to strike a balance between murky electronic pop and vintage genre exercises covering many decades. It’s no surprise that the highlights of the record span different genres – indeed, it sometimes feels like a bit of a Frankenstein’s Monster, stitched together with disparate ideas, but Remy is talented enough so that you don’t see, or at least notice, where it joins up. Few artists can make a cross-genre album work successfully, but Half Free feels natural and unforced. (7/10)

Listen to Half Free here!